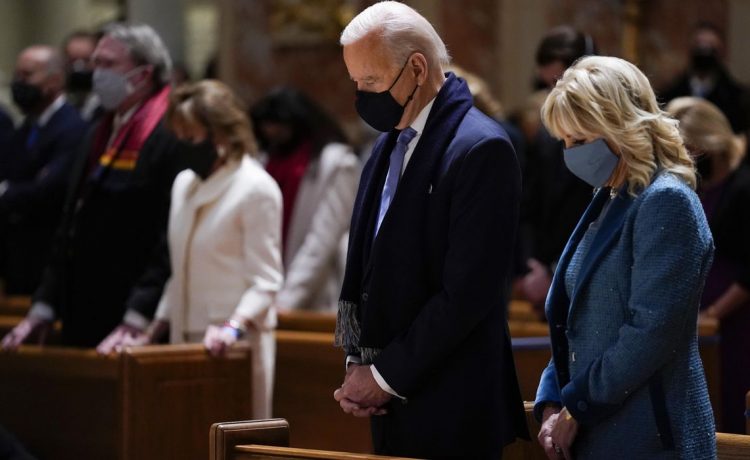 From the bishops to the voters, President Biden isn’t feeling the love ahead of the Nov. 8 election from his fellow Catholics.

Not only do Catholic voters disapprove of the president’s job performance, they support 11 of the 12 Republicans running for Senate and governor in six key swing states, according to a poll conducted by Trafalgar Group for EWTN/RealClear Opinion Research.

“The president’s political woes among Catholics are not aiding the position of the Democrats in the six battleground states both on the gubernatorial and Senate election fronts,” said the poll’s analysis. “In the races that will determine who controls the U.S. Senate, the survey found that the Republican candidates for the Senate were all in the lead heading into the midterms.”

The poll released Wednesday found Mr. Biden’s average disapproval rating in the six states at 62.2% and approval rating at 35.4%, driven by dissatisfaction with the economy, inflation and rising interest rates.

“It’s also clear that measures to protect the unborn are very popular among likely Catholic voters, especially when compared with those who say that abortion should be legal throughout all 9 months of pregnancy,” said Matthew Bunson, EWTN News executive editor.

Mr. Biden, only the nation’s second Catholic president, split the Catholic vote with President Donald Trump in the 2020 election. But the polling indicates that Democrats shouldn’t expect the president to offer much in the way of a coattail effect with his fellow churchgoers.

Indeed, Mr. Biden may be hurting more than helping his party with the Catholic faithful. His staunch pro-choice stance earned him a rebuke this week from the U.S. Conference on Catholic Bishops’ Committee on Pro-Life Activities.

Archbishop William E. Lori of Baltimore, who chairs the committee, issued a statement after the president vowed last week to codify the 1973 Roe v. Wade decision legalizing abortion if Democrats keep control of the House and Senate.

“The president is gravely wrong to continue to seek every possible avenue to facilitate abortion, instead of using his power to increase support and care to mothers in challenging situations,” said Archbishop Lori in a statement. “This single-minded extremism must end, and we implore President Biden to recognize the humanity in preborn children and the genuine life-giving care needed by women in this country.”

Days earlier, Archbishop Charles Chaput of Philadelphia revived the issue of whether Mr. Biden should receive communion in a speech at the Eucharistic Symposium at the Archdiocese of Arlington.

The problem with the argument that Catholics can support Joe Biden because “abortion isn’t the only issue” is that Joe Biden keeps making abortion the only issue. pic.twitter.com/XnFsin6ZwR

Mr. Biden isn’t on the Nov. 8 ballot, but other Catholic Democrats are also being called out for their stances on hot-button social issues.

“This comes as the popularity of the nation’s second Catholic president is tanking among Catholics,” said CatholicVote in a press release.

The campaign’s centerpiece is an ad targeting three Senate candidates – Sen. Mark Kelly of Arizona, Sen. Catherine Cortez Masto of Nevada and Rep. Tim Ryan of Ohio — over their stances on gender-transition procedures and abortions for minors without parental consent. All three are Catholic.

“Can you vote for Cortez Masto knowing she wants you out of the biggest decisions of your child’s life?” asks the Nevada ad, called “Can You Trust Them?”

CatholicVote president Brian Burch said that the Democrats “label themselves Catholic but support policies contrary to parents’ wishes, good medicine, and their own church’s teaching.”

In Arizona, 51.4% of voters polled backed Republican Blake Masters for Senate over Mr. Kelly, who took 46.3%. In the governor’s race, 52.5% supported Republican Kari Lake versus 46.9% for Democrat Katie Hobbs.

The only Democrat leading in the survey with Catholic voters was Pennsylvania gubernatorial candidate Josh Shapiro, who took 50.8% of support versus 44.5% for Republican Doug Mastriano.

On the Senate side, 50.7% of Catholic voters backed Republican Mehmet Oz while 45.2% supported Democrat John Fetterman.

In each state, strong majorities of Catholic voters supported limiting abortion in most cases to 15 weeks’ gestation.