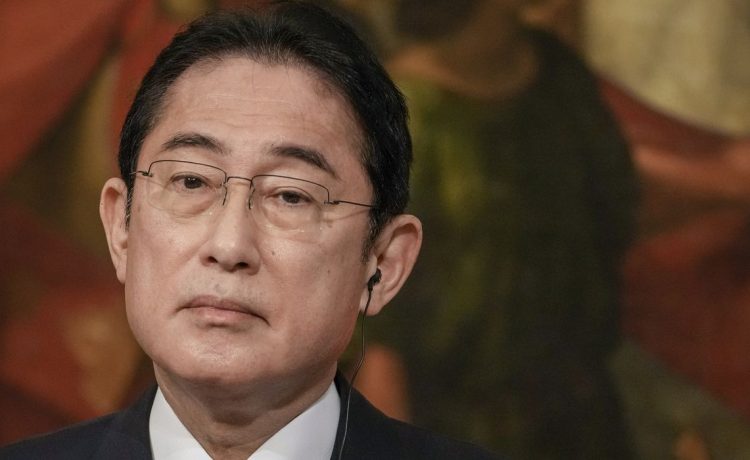 SEOUL | Japan is assuming major diplomatic responsibilities this year, but it is the country’s just-announced overhaul of its military forces and security policy that will likely take center stage as Prime Minister Fumio Kishida prepares for an unusually packed agenda when he meets President Biden Friday at the White House.

As Washington seeks to align its allies on dealing with Beijing, few capitals are responding as positively as Tokyo and few loom as large for Pentagon planners.

Japan’s re-armament, laid out last month by Mr. Kishida, is accelerating at a pace unmatched in the post-World War II era. Last month, the world’s third-richest nation announced that it would double defense spending to the NATO standard, 2% of GDP, by 2028. Moreover, it announced the acquisition of a Tomahawk cruise missile-based “counterstrike” capability from the U.S. for a military that was once constitutionally limited to “self-defense” measures.

How the projectiles will synch with U.S. doctrine, and its intelligence, surveillance and reconnaissance assets in the region are, as yet, unknown. But Washington and Tokyo have clearly been in close consultation as Japan emerges as a major military player in the rivalry with China.

“You don’t get to sign up for Tomahawk missiles unless the U.S. has a really good idea what you plan to do with them,” said Lance Gatling, the Japan-based principal of Axial Research, and a former operational planning officer in US Forces Japan.

Mr. Kishida is making a seven-day tour of allied capitals as Japan begins a two-year term as a non-permanent member of the U.N. Security Council and also hosts the G-7 summit for the U.S. and other industrial democracies in Hiroshima in May. He made stops in France, Italy, Britain and Canada before coming to Washington.

Japan, which long punched under its weight in regional and global security disputes, is suddenly a center of attention for both Washington and Beijing.

Mr. Kishida has spoken out strongly against Russia’s invasion of Ukraine, which – if successful – could feasibly provide a benchmark for a Chinese conquest of Taiwan. Closer to home, Japan is linked to Taiwan strategically, technologically and emotionally, much to Beijing’s displeasure.

Japan hosts 50,000 American troops, and its southernmost island chain is adjacent to Taiwan — two facts that threaten to draw Japan into any Chinese assault upon the island democracy.

Japan relies heavily upon Taiwan for its supply of high-end semiconductors. And emotionally, Taiwan is the only former Japanese colony that looks upon Tokyo amicably.

Not surprisingly, Mr. Kishida’s tour of Western capitals and the increasing security ties with the U.S. have both been met with sharp criticism from Beijing, with the state-controlled Global Times warning in an editorial this week that Tokyo should get “strategically sober as soon as possible.”

“In bilateral meetings between Japan and other G-7 members,” the editorial said, “it is unnecessary and dangerous to display a hard-line attitude toward China, tout the ‘regional threat theory,’ and even attempt to conduct an ‘anti-China tandem.’ If this is the main direction of Japanese diplomacy in 2023, it will be a terrible mistake.”

Moreover, Japan has territorial disputes with both China and Russia. It is also fearful of nuclear-armed North Korea, which in 2022, conducted more missile tests than ever before —with most being unleashed off the North’s eastern seaboard and some flying directly over Japanese territory.

Japan has for decades been constrained by its peace constitution. But in recent years, its Self Defense Forces (SDF) have quietly been muscling up. In 2011, the SDF acquired an overseas military base in Djibouti, North Africa. In 2014, Tokyo “reinterpreted” its pacifist constitution to allow for “collective defense” – i.e., support of an ally (read: the United States) under attack.

In 2018, Japan created a marine brigade – the first such unit activated since World War II — and is currently converting two vessels to light aircraft carriers – again, a class the nation has not fielded since World War II – with F-35Bs onboard. Japan already deploys more destroyers than the British and French navies combined.

This process, led by the ruling Liberal Democratic Party, or LDP, has faced ineffectual pushback. Although the 65-year-old Mr. Kishida, in office only since October 2021, faces weak personal approval ratings, the LDP’s ruling coalition controls both houses of the Diet, and its robust stance on defense enjoys the support of two minority right-wing parties.

“In Japan, the opposition’s position is weak, and it is hard to reflect their voices and views in decision-making processes,” said Lim Eun-jung, a Japan watcher and international relations specialist at South Korea’s Kongju University. “The opposition are trying to protect the ‘peace constitution,’ but their voice may be too philosophical and abstract for ordinary people.”

The announced new military capability is being welcomed by U.S. military officials, happy to see allies shoulder the burden in the face of the Chinese and North Korean challenges. It should also please U.S. defense contractors who were robbed of big contracts in 2020 when Japan abruptly reversed its decision to field an Aegis Ashore missile defense system.

Tomahawks, the defense analyst said, are effective against North Korea’s current missiles. Those need to be removed from the top cover, erected at a launch site and fueled. This process makes the missiles and their command centers vulnerable.

While many believe Tokyo is reversing a long-held defensive doctrine, Mr. Gatling said it was inevitable the SDF would evolve from its largely defensive shell.

“Back in the 1950s, the director general of the SDF said, … ‘Self-defense does not mean sitting and waiting for the blow to fall upon us,’” Mr. Gatling recalled. “But at that time they did not have a capability.”

They do now. Japan’s JDAM-armed F15s, their range extended by in-flight tankers, is a de facto counterstrike force, he said. Unmanned Tomahawks can be deployed without risking the lives of pilots.

Despite the rapidly evolving security situation in the region, some things remain unchanged for U.S. allies. Chief among them:  America’s nuclear umbrella is still essential.

Firstly, it seems unlikely Japan could deploy its Tomahawks to within striking range of Beijing’s strategic missiles, siloed deep in western China. Secondly, high-explosive-armed Tomahawks can’t deter in the long run nuclear-armed powers such as China, North Korea and Russia.

Mr. Biden and Mr. Kishida are also likely to touch on the economic phase of the competition with China, which is in some ways even more intense than the military posturing.

That comes on top of a new embargo on the export of advanced semiconductors to China approved by Mr. Biden, which also covers the machinery required to fabricate them. With chips being the heart of the digital economy, that is a painful strategic pressure point.

Japan, like the U.S., maintains a major two-way trading relationship with China despite the rising regional tensions. Indeed, China is the largest single market for Japanese exports. But Scott Foster, a Tokyo-based tech analyst with Lightstream Research, said Japan was likely to align itself with the American pressure campaign.

“I don’t know any Japanese company that puts their top technology in reach of the Chinese,” he said, citing past experience of widespread intellectual property theft by China, theft which enabled, among other things, China’s impressive network of super high-speed trains.

So while some Japanese firms continue investing in China, “the mother factories — the top-level technology development — are not in China. They are here,” he said.