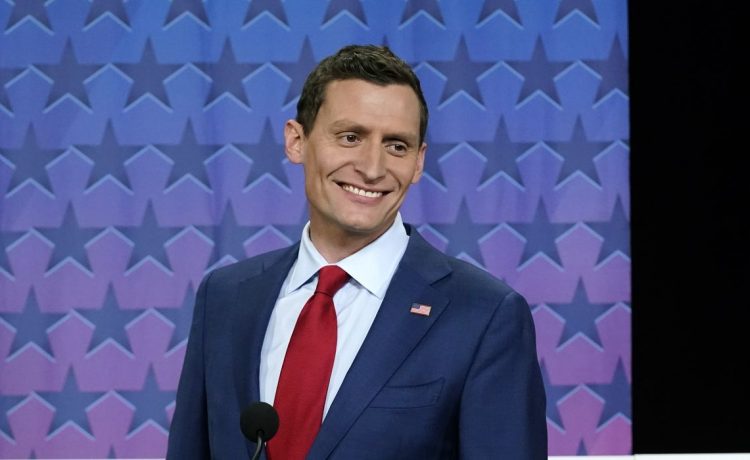 NOGALES, Ariz. — Republican Senate candidate Blake Masters said if Arizona voters elect him, he is prepared to shut down the government to force President Biden to reverse course on his border policies.

“I’m willing to go there,” Mr. Masters told The Washington Times in an exclusive interview in this border city, which serves as a major hub for fresh produce imports from Mexico.

He said he doubts Mr. Biden would go over the edge to allow a shutdown and figures the president won’t go all-in on an issue where he is clearly struggling with both voters and the realities on the ground. Still, Mr. Masters said, Republicans should be willing to “play hardball.”

“By exercising that leverage, I think we will win,” Mr. Masters said. “I think he will capitulate.”

If Republicans stick together, Mr. Masters said, they can paint the president into a corner by offering their votes in favor of spending bills to keep the government running in exchange for a change of course on the border.

“Go ahead, Mr. President, your move,” he said. “What’s he going to do? He’s going to shut the government down and try to blame Republicans?

“No, we’re going to say, ‘Hey, he’s not securing the border,’” Mr. Masters said. “If Biden wants to shut the government down and tell the American people that he’d prefer to do that over having border security, that’s a political loser.”

The 36-year-old venture capitalist is facing off against Democratic incumbent Sen. Mark Kelly in a race that is perhaps the clearest referendum right now on Mr. Biden’s border policies.

Mr. Kelly, a 58-year-old former astronaut, tried to distance himself from the president on immigration, but Mr. Masters said voters are choosing between Mr. Biden’s policies and a change in direction.

Mr. Kelly won his seat in a 2020 special election and is running for a full six-year term against Mr. Masters, a political newcomer who won the Republican nomination after getting a massive financial boost from billionaire Peter Thiel and winning an endorsement from former President Donald Trump.

The race also features libertarian Marc Victor, who pollsters say is a wildcard in the race. He offers disenchanted voters an alternative to the two major party contenders.

Mr. Kelly is also the husband of gun control activist Gabby Giffords, a former congresswoman who resigned in January 2012 after suffering severe brain injury when she was shot in an assassination attempt by a crazed gunman.

Mr. Kelly is clinging to a lead in the polls, buoyed by the fact that voters have a more personal affinity for him.

By a wide margin, voters also favor Mr. Kelly on the abortion issue in the wake of the Supreme Court ruling this year overturning Roe v. Wade, the landmark 1973 ruling that established a constitutional right to the procedure.

Abortion, however, is competing with or ranks below the economy, inflation and immigration in terms of importance to likely Arizona voters, including among independents — and Mr. Masters has the edge there.

The border chaos is unprecedented. Encounters with illegal immigrants are at all-time highs and dangerous drugs such as fentanyl are pouring into the U.S. at record levels. The migrant smuggling economy is now worth $20 billion a year, according to calculations by The Times. That’s roughly triple the size of the migrant surge in 2019.

Much of the money goes straight to smuggling cartels, which pump the cash back into drugs.

Arizona is also ground zero for the catch-and-release policies that are driving the surge. Of roughly 200,000 illegal immigrants nabbed in the Border Patrol’s Yuma sector since January, 95% were released, the local sheriff said.

In a debate with Mr. Masters last week, Mr. Kelly struggled to defend the situation.

Describing it as a chaotic “mess,” the Democrat said he fought to pass $1 billion to pay for more Border Patrol agents and more security and monitoring systems. He said he is working to raise Border Patrol pay and won the Homeland Security Department’s commitment to close some gaps in the border wall in Yuma.

“I’ve been strong on border security and I’ve stood up to Democrats when they are wrong on this issue, including, by the way, the president,” he said. “I’ve been focused on the border since Day One.”

Mr. Masters snapped back: “To no great effect because we have a wide-open border.”

“So if that is the best you can do, I respectfully request that you resign,” Mr. Masters said. “Let’s get someone in there who will actually secure our border.”

Mr. Masters took a victory lap the next day at a diner in Rio Rico, Arizona, where he told voters he had exposed Mr. Kelly.

“I said, ‘Senator, did you do everything in your power the last two years to secure our southern border?’ That is not a gotcha question; that’s a fair question,” he said. “Now, it is a tough one for him to answer because if he says yes, well, he is confessing to be ineffective. If he says no, then, well … you’re not trying to secure the border?”

Mr. Masters’ immigration plan includes finishing the border wall, tripling the size of the Border Patrol, increasing high-tech border surveillance, mandating that all companies use the E-Verify system to check whether new hires are legally able to work, and speeding up the backlog of deportation cases by hiring significantly more immigration judges and U.S. Citizenship and Immigration Services officers.

The hard reality facing Republicans, even if they win control of both chambers of Congress in November, is that Mr. Biden retains veto power and is unlikely to be swayed by a series of border security bills landing on his desk.

That’s where Mr. Masters says his shutdown gambit comes into play and forces Mr. Biden to defend his border policies.

Mr. Masters said flipping control of Congress is the first step toward better border policies. The next step is taking back the White House in 2024.

“So we’re just going to have to find a way to keep the caucus united and play hardball,” he said.

Republicans have orchestrated shutdowns before, including one partial shutdown that lasted a record 35 days as President Trump demanded money for his border wall. He eventually relented and signed bills lacking the funding level he sought. He then used emergency powers to siphon cash from Pentagon accounts.

Congressional Republicans, meanwhile, forced a shutdown in 2013 over Obamacare. They relented after 17 days without achieving any changes.