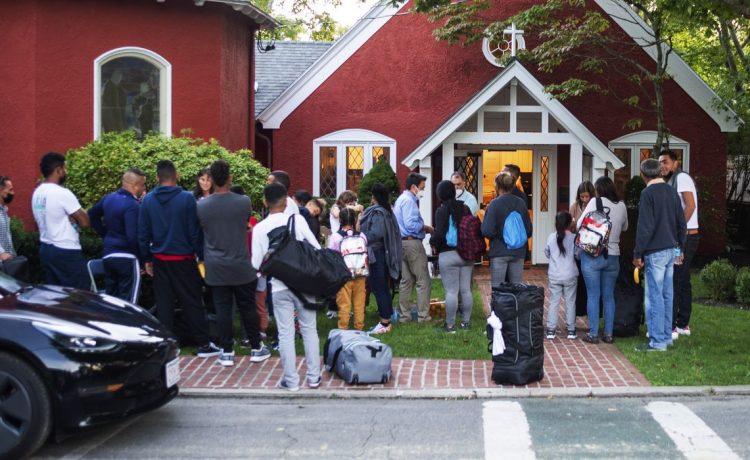 Martha’s Vineyard said it was stressed when about 50 migrants were flown to the exclusive island enclave earlier this month.

His county has already seen that many migrants this year, just counting dead bodies. Some 78 migrants, all victims of the treacherous journey, have been collected from ranch lands in the county. That’s on top of the 119 bodies last year. Each costs money to gather, handle and autopsy. The sheriff says the county spends hundreds of thousands of dollars to do that work.

That’s on top of the more standard costs of smuggling and crime. Smugglers cut ranch fencing, which has to be repaired at $600 for every 100 feet. And the sheriff’s department has counted 32 stolen vehicles and a handful of stolen firearms it says are part of the border chaos. Even fuel costs add up, as sheriff’s deputies get called out for car chases with smugglers.

The brouhaha over busing migrants is vexing to officials in small communities along the southern border who say they’ve been screaming for federal help for months as they’ve been inundated with migrants, and all the attendant costs that come with them, without any sense that the powers in Washington are listening.

“Guess what? We need money too. We’ve been asking the federal government for money and nothing’s happened,” Sheriff Martinez told The Washington Times.

Democrats have accused Florida Gov. Ron DeSantis of a “stunt” in sending the migrants from Texas to Martha’s Vineyard. But the move has also goosed Democrats into trying to do something about it.

Sen. Elizabeth Warren, Massachusetts Democrat, said she feels Congress has already taken care of border communities with “billions of dollars of federal resources to make certain that food and emergency shelter are available anywhere that there are migrants who need it, whether that’s in a border town in Texas or the middle of Boston.”

“That fund is low on money, and the Democrats are willing to put a lot more resources into it,” she said. “I hope we’ll get some Republicans who are willing to do that as well.”

Ms. Warren was speaking about a looming spending bill due before the end of this month. President Biden has asked for a massive cash infusion to better welcome, transport and shelter migrants throughout the country.

Republicans wondered why the president didn’t propose extra money for border security to stop the illegal immigrants from coming in the first place.

Sen. Chris Murphy, Connecticut Democrat, blamed the GOP for that.

He said new money “to deal with the flows into the country” is tied to a broader bill to legalize illegal immigrants, and Republicans aren’t on board with that option yet.

Mr. Murphy, who is chair of the Senate subcommittee that controls Homeland Security’s budget, doubted money for more agents would help right now. And he rejected the idea of constructing more border wall, saying it wouldn’t be installed for years.

“Mexico is willing to do more on their border, their southern border, but they need support to do that. They need additional funding, but so far as I can tell, Republicans are unwilling to spend money on anything other than a wall between Mexico,” he said. “That’s a fool’s errand. But helping Mexico with its southern border, which is not really a wall, it’s about personnel, will be really helpful.”

When Texas Gov. Greg Abbott began the migrant busing campaign in April, his goal was to share the pain of handling the overwhelming numbers of people who have been caught and released into his state under the Biden administration.

It turns out to have been a wildly successful plan.

Washington Mayor Muriel Bowser declared an emergency and has begged the federal government for permission to deploy the National Guard — a proposal the feds have rejected.

In Illinois, where the governor doesn’t need a federal OK, Gov. J.B. Pritzker declared an emergency disaster and called up 75 members of the Illinois National Guard to help Chicago welcome several hundred migrants Texas has sent.

Illinois Sen. Richard Durbin, the No. 2 Democrat in the chamber, defended Chicago’s handling of the migrants and blasted Texas in a speech this week.

“If these governors were transporting these people in good faith to Chicago or New York or Washington, they would have the decency to tell us who is coming and when. They don’t,” Mr. Durbin said in a speech on the Senate floor. “They put the buses on the road, and they stop at a train station and turn them all loose.”

Ironically that’s the same complaint local officials have been aiming at the feds over so-called “ghost flights” of illegal immigrants into their communities.

In Martha’s Vineyard, the migrants proved too tough to accommodate. Massachusetts moved them to a military base at Cape Cod.

That prompted jokes about Martha’s Vineyard deporting the migrants.

Ms. Warren bristled at that notion, saying Martha’s Vineyard did all it could.

“They had a place for 47 people that had two bathrooms and one shower. And the state immediately found a better place where everyone could have access to the facilities they needed,” she said. “That’s how we do it in Massachusetts. We all work together.”

Some of the migrants filed a class action lawsuit Tuesday against Mr. DeSantis accusing him of bamboozling them into making the trip.

Officials along the border wonder why their disaster declarations didn’t move the needle the way those in D.C. and Illinois did.

Yuma County Sheriff Leon Wilmott said the Border Patrol has caught roughly 200,000 illegal immigrants in its Yuma sector since January, and 95% of them were then released into the country — many in Yuma itself, while others have been transported north to Phoenix, where officials said they had overrun the airport.

Asked what the difference was between Martha’s Vineyard and Yuma, the sheriff had one response: “Politics.”