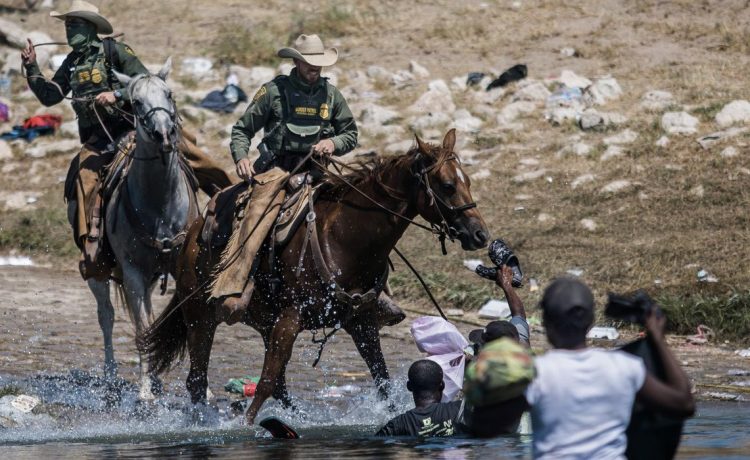 Border Patrol agents didn’t whip or strike Haitian migrants last year, a lengthy internal affairs investigation concluded Friday, but it did find that some agents used excessive force by positioning their horses in the Rio Grande to try to keep the migrants from reaching the U.S.

Investigators also faulted agency leaders, saying they lacked clear goals for dealing with the unprecedented incursion of 15,000 migrants who established a squatters camp on the American side of the river, then began to come and go freely from Mexico, challenging the integrity of the border.

Four agents have been recommended for discipline over their use of force and, in one case, for insulting language used against migrants. Those cases are still pending, officials said, and the agent remains on desk duty nearly 10 months after the incident, which drew international attention.

Images of the incident showed horse-mounted agents riding through the water trying to corral migrants, with the horses’ reins swinging freely. That led some observers to say the migrants were being whipped.

President Biden had said the migrants were “strapped” and Vice President Kamala Harris compared the treatment to the worst abuses of slavery. Mr. Biden had vowed the agents “will pay.”

The investigation by Customs and Border Protection’s Office of Professional Responsibility reviewed extensive footage, including from a drone that they had flying overhead, spoke with witnesses and gathered accounts from the migrants themselves. They concluded nobody was actually struck with the reins, nor was anyone intentionally struck by the mounted agents.

“There is no evidence that BPAs involved in this incident struck, intentionally or otherwise, any migrant with their reins,” the investigation concluded.

Still, CBP said some of the agents should pay for the way they used their horses’ bodies to try to seal off the U.S. banks of the river. In one example investigators cited, an agent chased after a migrant and came perilously close to a young child in the water.

That agent also used insulting language against migrants, chastising men for appearing to shield themselves behind women, investigators said. The agent displayed an “unprofessional manner,” the probe concluded.

Even as they faulted the agents, investigators made clear they were put in an impossible situation by the unprecedented takeover of U.S. land by 15,000 illegal immigrants.

They streamed across the Rio Grande in September, overwhelming the Border Patrol’s ability to process them. The migrants set up a squatters camp in Del Rio, Texas, and demanded to be processed and released, as they’d seen the Biden administration do to hundreds of thousands of other migrants in the preceding months.

Border Patrol agents kept the migrants corralled but didn’t have supplies, so they issued raffle-style tickets to the migrants to mark their place in the processing line, then stood by as people began to cross the Rio Grande freely to get food and drinks from the Mexican side.

Friday’s investigation found Border Patrol leaders lacked a strategy for dealing with those already here, and for addressing those still streaming over.

The horse patrol agents were given only the slimmest of briefings before being sent out into the field.

And complicating matters was the presence of Texas law enforcement, which had its own goals of protecting Texans’ property and at some points blocking the river to try to prevent more people from coming.

Agents had been told not to interfere with those coming but were also told to assist the Texas Department of Public Safety in its missions. So when Texas authorities asked the Border Patrol for help to block migrants’ entry on Sept. 19, agents from the horse patrol were deployed.

They asked for guidance from their supervisor, who called up the chain of command but got no answer, and gave the go-ahead to help Texas authorities, investigators concluded.

First, the agents and state police troopers dispersed a crown already on the U.S. side, pushing them back toward the boundaries of the camp. Then the agents and troopers turned their attention to people coming across the river, some of whom were holding up their raffle-style tickets to show they had already been on the U.S. side and were merely returning with food.

“As a result of a lack of command, control, and communications, [Horse Patrol Unit] personnel carried out an operation at the request of TXDPS which directly contravened USBP operational objectives and resulted in the unnecessary use of force against migrants who were attempting to reenter the United States with food,” the investigation concluded. “They did so with authorization from their supervisor who was unable to obtain additional guidance from higher in the USBP chain of command at the time of the request.”

Investigators said even as illegal immigrants, those in the water were technically applicants for admission to the U.S. and using horses to try to block them amounted to unprofessional conduct and a wrongful use or threat of use of force.

Ultimately, it appears all the migrants who wanted to come made it across and the agents didn’t actually block anyone, the probe concluded.

One former agent told The Washington Times the use of force case will be tough to stick.

He said horse patrols are frequently used as a deterrent factor, and it’s difficult to see how the agents’ presence was intended as anything else.

The four agents likely have several avenues of appeal ahead of them, and CBP officials declined to say any more about their situation other than that they remain on administrative duties.

In the immediate aftermath of the incident, Homeland Security Secretary Alejandro Mayorkas appeared to give the agents involved a pass, saying they were trying to control their horses. But after a talking-to by the vice president, he changed his tone and said the images he saw were disturbing. He told Congress the investigation would be done in “days.”

Instead, the probe dragged for months, leaving critics within CBP and on Capitol Hill to suspect the agency was trying to orchestrate an adverse finding to fulfill Mr. Biden’s pledge that would “will pay.”

CBP officials said Friday they followed a normal process and insisted there was no interference from higher-ups.

Both the Homeland Security inspector general and the federal prosecutor in western Texas declined to pursue the case, which returned it to the Office of Public Responsibility. Officials said Friday they had been waiting on the federal prosecutor to make a decision, which happened in March, and they submitted their report to higher-ups in April.