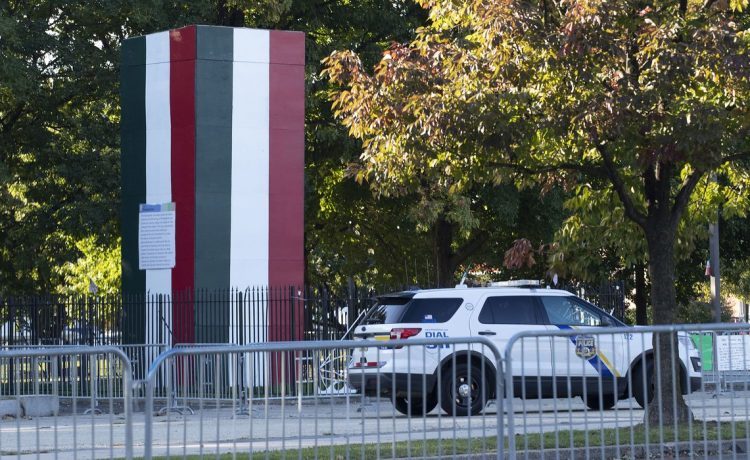 PHILADELPHIA — A statue of Christopher Columbus in Philadelphia remains hidden by a plywood box while its fate is decided in the courts, but the box has now been painted with the colors of the Italian flag.

City officials told the news station KYW that they painted the box covering the 146-year-old statue in south Philadelphia’s Marconi Plaza with green, white and red stripes at the request of Councilmember Mark Squilla, who represents the district.

The new look came just in time for Columbus Day, the holiday now celebrated in Philadelphia and elsewhere as Indigenous Peoples Day.

Thomas DeFino, one of the residents who gathered in the park Sunday afternoon to celebrate their Italian American heritage with a parade and festival, welcomed the change, The Philadelphia Inquirer reported.

“They did it for us – the Italians. It made us feel a little bit better,” DeFino said. “It’s to honor our heritage. They had to pull some strings to paint it.”

While he appreciated the gesture, DeFino said, he noted that the statue was “still in a box.”

“He should have been taken out at least for one day,” he said.

Mabel Negrete, executive director of Indigenous Peoples’ Day Philly Inc., told the Inquirer it was “unfortunate” that some Italian Americans in the city continued to celebrate Columbus. The painting of the box in colors of the Italian flag, she said, “undermines intentions to move forward.”

Supporters in Philadelphia, a city with a deep Italian heritage, say they consider Columbus an emblem of that heritage.

Mayor Jim Kenney said Columbus was venerated for centuries as an explorer but had a “much more infamous” history, enslaving Indigenous people and imposing punishments such as severing limbs or even death.

After protests about racial injustice began in June 2020 and some focused on the statue, Kenney ordered its removal, calling it a matter of public safety. A judge last year, however, reversed the city’s decision, saying it had failed to provide evidence that the statue’s removal was necessary to protect the public.

A lawsuit settlement announced last year allowed another 106-foot-tall Christopher Columbus monument at Penn’s Landing on the Delaware River to remain in place with coverings removed for the foreseeable future, the Inquirer reported.