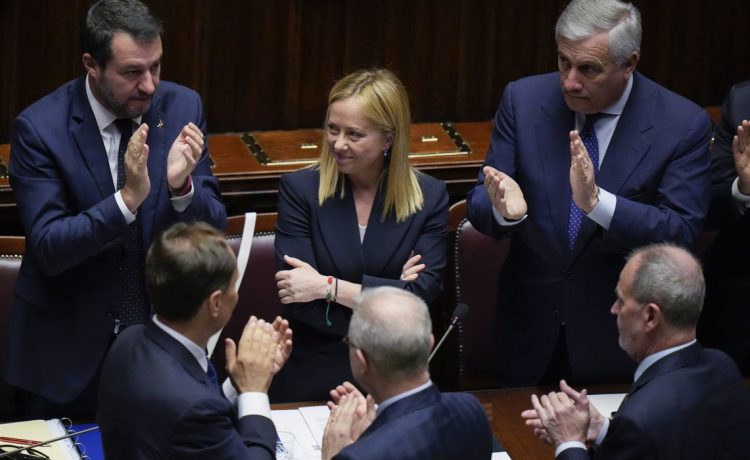 ROME — The stunning rise of Giorgia Meloni as Italy’s prime minister has brought a change in focus across Europe, testing whether the country’s most right-wing government since World War II will herald a new wave of European populist nationalism or is simply the latest political tremor in a country that averages nearly one government per year.

Right-wing nationalism has thrived under Viktor Orban in Hungary since 2010, and a nationalist coalition has run Poland’s government for nearly five years. In September, the neo-Fascist Sweden Democrats were invited to participate in that country’s government for the first time, and nationalist parties have been junior partners in the current coalitions in Bulgaria since August and in Latvia since 2019.

But Italy is also a founding member of the European Union and boasts the bloc’s third-largest economy now that Britain has left. And, more critically, Italian nationalist movements have had a history of starting trends in Europe: Benito Mussolini’s March on Rome almost exactly 100 years ago was the start of a continent-wide nativist movement that eventually helped spark a second world war.

“I don’t think we can call what is happening in Europe a nationalist wave, but that could change,” Eelco Harteveld, a political scientist specializing in extremism at the University of Amsterdam, said in an interview. “For now, we have to say that each case in Europe, most recently Sweden and then Italy, has its unique causes. But we can also see that broad support for nationalist parties in Europe has gradually been on the rise over the last ten years.”

There are national differences, but far-right parties across Europe offer a consistent critique of the continent’s leftist, international tilt, promoting “traditional” social values, a skepticism of immigration and open borders, a resentment of traditional elites and the political establishment, and a fierce defense of sovereign rights, expressed primarily in opposition to the “intrusive” and unresponsive bureaucracy of the European Union.

It has proven to be a potent political formula, even though — until now — it hadn’t been strong enough to win elections and lead governments in some of the continent’s biggest and wealthiest countries.

Ms. Meloni’s Brothers of Italy party — which now heads Italy’s 74th government in the 79 years since Mussolini was deposed and subsequently executed — is built on the ashes of Europe’s first major Fascist movement. According to Mattia Zulianello, a professor specializing in radicalism at Italy’s University of Trieste, the political right has what he called a “structural advantage” in Italy due to a complicated history involving the conservative influence of the Vatican and regional kingdoms that weren’t fully united until 150 years ago.

“Italy has always leaned toward the right politically, and its opposition on the left has been in decline for some time aside from a few geographic areas,” Mr. Zulianello said in an interview. “But the latest national vote is still very noteworthy because now we have two radical parties in the same coalition [Brothers of Italy and the separatist League party], and that has something that hasn’t happened before.”

How Ms. Meloni will govern is the consuming question in both Rome and Brussels these days. Her party came in first in September’s election with more than a quarter of the vote [we give the exact figure, 26.1%, below], in part because she stayed out of the fractious, partisan squabbling that undermined the previous coalition government headed by respected centrist Mario Draghi. She also took one major foreign policy question off the table, saying her government, unlike some other far-right parties on the continent, would continue the strong support for Ukraine in fighting off Russia’s invasion.

The new prime minister’s first in-person meeting with a fellow European leader, hours after she took power, was with French President Emmanuel Macron — a staunch “Europeanist” who held off a far-right challenger to win his own reelection earlier this year — and her initial round of telephone calls Ursula von der Leyen, president of the EU’s executive European Council.

In her first speech to Parliament Tuesday, she issued her strongest denunciation of classic Italian fascism, calling Mussolini’s racial laws and the deportation of Italian Jews during World War II “the worst moment in Italian history.” She vowed to oppose “anti-democratic regimes, including fascism” and would fight “every kind of racism, anti-Semitism and discrimination.”

Her basic message: She was elected not to destroy the EU, but to fix it, by making it less prescriptive and more responsive to the people that live in the bloc.

The new conservative coalition in Rome does not want “to slow down or sabotage European integration, but to steer it to be more efficient in its response to crises, … and to be closer to people and businesses,” she said at one point. “…Those who raise questions are not enemies or heretics but pragmatists who are not afraid to say when something is not working.”

Given the political breakthrough in Italy, many are wondering what comes next for Europe, and whether other conservative populist parties can replicate Ms. Meloni’s blueprint. There will be an early test for European nationalism on Nov. 1 in Denmark. But most polls show the Danish People’s Party — which surged to nearly 9% of the vote in 2019 — projected to get less than 3% of the vote this time around.

Next year could be eventful, however. In July, voters will go to the polls in Greece, where the ultra-nationalist party Golden Dawn rose to prominence after the 2008-09 global financial crisis and then all but disappeared in the span of a decade. Earlier this month, former U.S. President Donald Trump joined Ms. Meloni and Mr. Orban from Hungary to campaign via video link for Spain’s far-right Vox party, but voters there won’t cast their ballots until November or December 2023.

In the meantime, the developments in Italy are almost certain to shift the balance of power in Europe. Though the Brothers of Italy has distanced itself from previous positions critical of the European Union, the euro currency, and NATO, Ms. Meloni has vowed to disrupt “business as usual” in the EU — something that could impact consensus European policy toward such issues as refugees, energy and the environment.

The party (which in Italy’s last three national elections has seen its share of the vote rise from 1.9 percent in 2013 to 4.4 percent in 2018 to 26.1 percent this year) is no stranger to aiming high.

In addition to campaigning for Vox in Spain, the Brothers of Italy had prime slots at Conservative Political Action Conference (CPAC) in Orlando in February and in Hungary in May. Since the Sept. 25 vote in Italy, the party has begun opening affiliate offices around the world, including two in Florida and Texas.

According to Edmondo Cirielli, a member of Brothers of Italy’s first small parliamentary delegation in 2013 who was just elected for a third term, international coalition-building is part of his party’s long-term strategy.

“We’re at the center of a third pole in European and global politics, in opposition to the left and the populists,” Mr. Cirielli told the Washington Times. “The world is more connected than ever, in politics, in diplomacy. We’re trying to establish a kind of international collaboration that will help implement certain values. It’s a strategy for growth.”

Ms. Meloni herself bristled Tuesday at suggestions that fellow EU countries would need to keep a “vigilant” eye on her new government, given its history and agenda.

Such comments reflect “a lack of respect for the Italian people, who don’t need lessons,” she said.

Mr. Harteveld, the Dutch political scientist, said the passage of time has made it easier for parties like Brothers of Italy or the Sweden Democrats to reinvent themselves, despite direct ties to politically toxic movements of the past.

“These nativist parties are focusing on the parts of their legacies that resonate and even so, there is still great concern across Europe,” Mr. Harteveld said. “But it’s likely something like this could not have happened in the 1980s or 1990s because there were still too many people around who remembered first-hand what happened in Europe in the 1930s and 1940s. Now, those people are gone and that era appears only in the history books.”