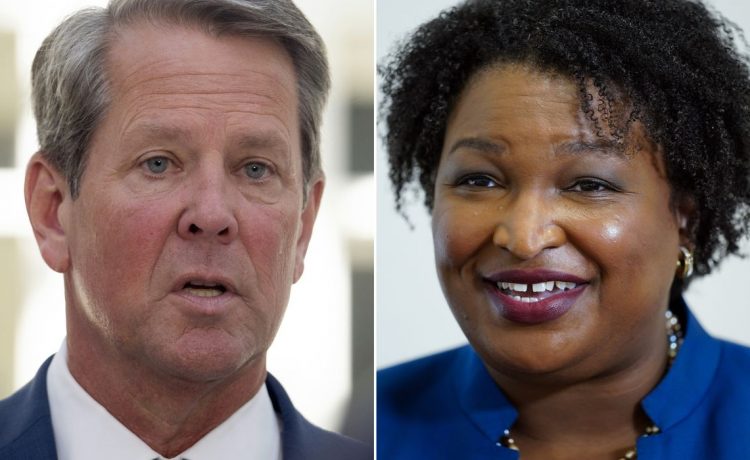 Democrat Stacey Abrams and Republican Brian Kemp met on an Atlanta debate state Monday, hours after early voting began in Georgia on a slate of critical races, including their second matchup in four years for control of the governor’s mansion.

Mr. Kemp is the incumbent governor, and Ms. Abrams, the rising Democratic superstar who was once eyed as Joe Biden’s running mate, trails him by about five percentage points in the RealClearPolitics average.

Fighting to climb out of the deficit, Ms. Abrams, 48, sought Monday to define Mr. Kemp, 58, as an extremist on guns, abortion and voting rights.

She doubled-down on claims that the state voting system, overseen by Mr. Kemp in 2018 when he was secretary of state, had implemented policies that restricted access to ballots when the two faced off the first time.

The Democrat also accused Mr. Kemp of “belonging to a good ol’ boys club, where we don’t focus on the needs of our people” and said he “has beat his chest but delivered very little for most Georgians.”

Mr. Kemp returned fire on Ms. Abrams, calling her a radical who endorsed lockdowns, school closures and mask mandates over the coronavirus epidemic.

He also said that if elected to run the Peach State, she would raise taxes and defund the police, highlighting her lack of official endorsements from state law enforcement officials.

“I will just say that Miss Abrams is gonna do a lot of attacking on my record tonight because she doesn’t want to talk about her own record,” Mr. Kemp said. “No sheriffs are endorsing her statewide because of her stances on wanting to defund the police, eliminate cash bail in serving on the boards of organizations like the Margaret Casey Foundation that supports and gives grants to organizations that are promoting the ‘defund the police’ movement.”

He also denied engaging in “vote suppression” as Ms. Abrams has spent years claiming, pointing out that voter turnout has increased during his tenure.

The debate included Libertarian nominee Shane Hazel who argued he was running “to send the race into a runoff,” in order to ensure more freedom in Georgia, including an end to property taxes, civil assets forfeiture and the criminalization of marijuana possession.

Mr. Kemp is fighting for a second term in a state that has become far less reliably red in recent years as new Democratic voters flood Atlanta and its suburbs.

He won the governor’s raise narrowly in 2018, beating Ms. Abrams by 55,000 votes and barely avoiding a runoff by winning a fraction more than 50% of the vote.

The consensus of polls show him on track to again dodge a runoff, but some other surveys show the two candidates within just a couple points of each other and within the poll’s error margin.

Ms. Abrams is running on a platform to provide raises for teachers and to expand Medicaid to include more low-income adults. She’s also pitching higher pay for state troopers and corrections officers, tying the funding to new de-escalation and use-of-force training as well as a statewide database to track officer misbehavior.

Ms. Abrams said she wanted to use some of the state’s $6.6 billion surplus with expanded pre-kindergarten and an $11,000 pay raise to teachers, who are quitting in high numbers.

“Under this governor, we have a 67% retention rate,” she said.

She called on Mr. Kemp to address “the Racial Equity Act” facing Georgia businesses and contractors and said the governor “does not have a plan” to make sure minorities have access to “racial and economic equity,” in the state.

Mr. Kemp promoted his move to reopen Georgia during the pandemic and cut taxes, and that the surplus that Ms. Abrams wants to spend came from his decision to avoid extended lockdowns that she had endorsed.

But Mr. Hazel said the governor was too slow to reopen businesses and forced vaccine and mask mandates while keeping some businesses closed in “a tyrant move.”

“I was the first state to reopen the small parts we asked to close and our recovery has been as good as any state in the country,” Mr. Kemp said.”We were open and Georgians were open.”

If elected, Ms. Abrams said she would work to repeal the state’s “heartbeat law,” which bans abortions after six weeks.

In September, Ms. Abrams attracted criticism for calling an early fetal heartbeat “a manufactured sound,” used to “convince people that men have the right to take control of a woman’s body.”

Even if elected, Ms. Abrams would have difficulty implementing her proposals, including the expansion of Medicaid, because the legislature is poised to remain under GOP control.

But she said her experience in the state legislature — when she was nominated in 2018, she was the Democratic leader in the Senate — will enable her to work “across the aisle” with Republicans.

Mr. Kemp said Medicaid “is a broken government program,” and that expanding it would result in private-sector employees being kicked off their private health care.

Mr. Kemp said his goal is helping residents “fight through 40-year inflation and disastrous policies in Washington D.C.” He pointed out that Ms. Abrams was once lobbying to be the running mate of Mr. Biden, who is deeply unpopular in the state.

If elected, Ms. Abrams said she would try to repeal a law signed by Mr. Kemp in April that lets Georgia gun owners carry a concealed weapon in public without a license.

She said Mr. Kemp has “weakened gun laws across this state and flooded our streets with guns by letting dangerous people get access to those weapons.”

Mr. Kemp said law-abiding citizens are buying guns to protect themselves from criminals.

Ms. Abrams said her great-grandmother taught her how to shoot a gun but more safety rules should be in place, including required background checks for private sales and at gun shows.

The two debated education issues, which Mr. Kemp said, “quite honestly has woken a lot of people up,”

Parents, Mr. Kemp said, “are getting tired of kids being indoctrinated in the classroom,” and promoted the Parents Bill of Rights he signed in April, that ensures parents have access to school curricula.

Ms. Abrams said low pay is pushing teachers out of the profession, as well as high stress and “being told to teach a curriculum that does not reflect the values and needs of our children.”