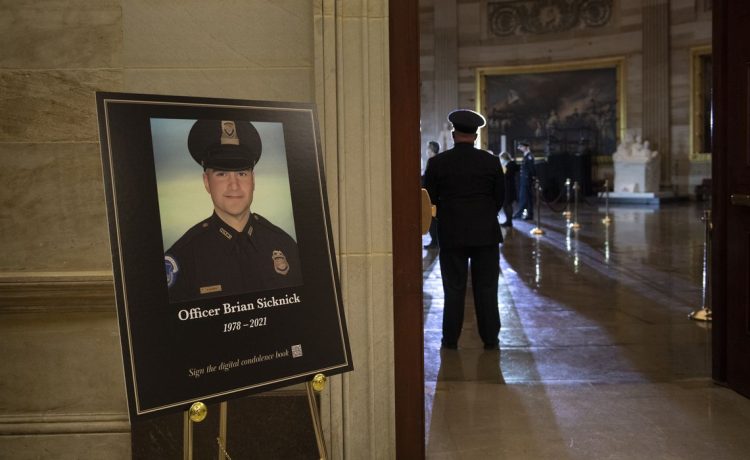 The fiancee of a Capitol Police officer is suing Donald Trump, accusing the former president of his wrongful death and other damages.

Sandra Garza, representing the estate of Officer Brian Sicknick, is reportedly seeking $10 million from the 2024 Republican presidential-primary hopeful, saying he was at fault in the Jan. 6 riots.

The lawsuit charges that Sicknick’s death was the result of Mr. Trump’s rhetoric and claims that the 2020 presidential election was stolen from him.

Two men, Julian Khater and George Tanios, have pleaded guilty to assault charges related to the attack on Sicknick, and they also are named in the lawsuit.

According to a statement from the Kaiser Dillon law firm, posted on social media by reporters, the lawsuit “is an important part of the process of those who caused his death accountable.

“Former President Donald Trump called Khater and Tanios to Washington D.C. to attack the Capitol and they answered. This directly caused Officer Sicknick’s death,” said Matt Kaiser, one of the attorneys bringing the case.

The District of Columbia’s Office of the Chief Medical Examiner found in April 2021 that Sicknick died Jan. 7 of natural causes from two strokes suffered hours after the attacks.

The 42-year-old Sicknick was sprayed with a chemical substance outside the Capitol at around 2:20 p.m. ET on Jan. 6, but he did not suffer an allergic reaction nor was there evidence of internal or external injuries, Dr. Francisco Diaz said.

But “this does not change the fact Officer Sicknick died in the line of duty, courageously defending Congress and the Capitol,” the U.S. Capitol Police said in a statement.

President Biden is expected to honor Sicknick posthumously with the Presidential Citizens Medal on Friday, the second anniversary of the riot.