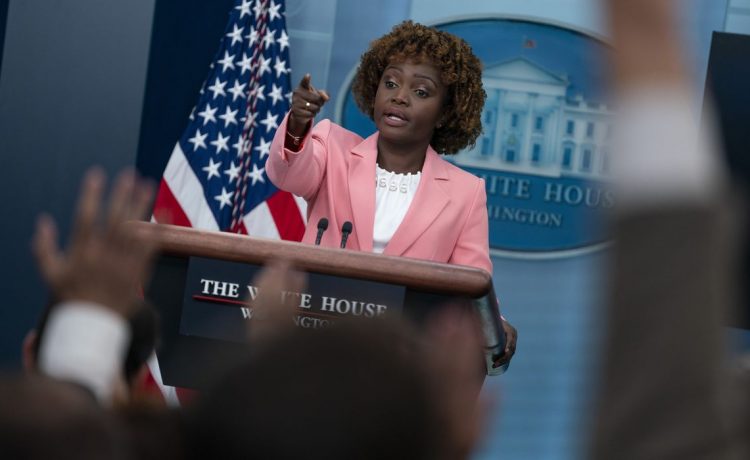 White House press secretary Karine Jean-Pierre triggered an uproar in the briefing room Wednesday with a strained explanation for why President Biden asked for the late Rep. Jacki Walorski while on stage at an event earlier in the day.

The president’s gaffe sent shockwaves through Twitter and dotted midday headlines, but Ms. Jean-Pierre said the Indiana Republican, who was killed in a car accident in August, was simply “on his mind” at the White House Conference on Hunger, Nutrition and Health.

“The president was naming the congressional champions on this issue and was acknowledging her incredible work,” the spokesperson told reporters.

She added that Mr. Biden is planning to host the congresswoman’s family at the White House for a bill signing in her honor on Friday.

“She was top of mind for the president,” Ms. Jean-Pierre said.

At the conference, Mr. Biden singled out bipartisan lawmakers who had helped make the event happen.

SEE ALSO: Biden looks for dead congresswoman in crowd at a White House event: ‘Are you here?’

As he was ticking off names, Mr. Biden then wondered aloud if Walorski was in the audience.

Shortly after Mr. Biden’s remarks, White House domestic policy adviser Susan Rice acknowledged during a panel discussion that Walorski, who was an Indiana Republican, had died.

Walorski, 58, was killed in an Aug. 3 two-vehicle crash in her northern Indiana district. A 55-year-old woman driving the other car was also killed in the crash.

At the time of her death, Mr. Biden issued a statement offering condolences. The White House also lowered flags to half staff to honor her passing.

Ms. Jean-Pierre’s explanation did little to calm the flood of questions.

One reporter asked to see the teleprompter transcripts for the event.

“[I’m] not really sure what that has to do with anything,” Ms. Jean-Pierre responded. “I just answered the question about her being on top of mind. I don’t think that’s unusual.

“I feel like many of us have gone through that particular time where someone is on top of mind, and you call them out,” she said.

Several reporters continued to follow up on her response only to be met with similar explanations.

“I know this is a question that many of you have had. I’ve answered it multiple times already,” she said at one point. “My answer is certainly not going to change.

“Again, she was at the top of mind,” she continued.

One reporter quipped “I have John Lennon on top of mind just about every day but I’m not looking around for him.”

“When you sign a bill for John Lennon … then we can have this conversation,” Ms. Jean-Pierre responded.

The back and forth spiraled further with the press secretary briefly losing control of the room amid the pushback.

“This is a legitimate question,” one reporter shouted, interrupting her colleagues. “We need to have some answers.”

“These moments of confusion are happening with increased frequency,” the reporter continued. “Americans are watching. What do you say to that?”