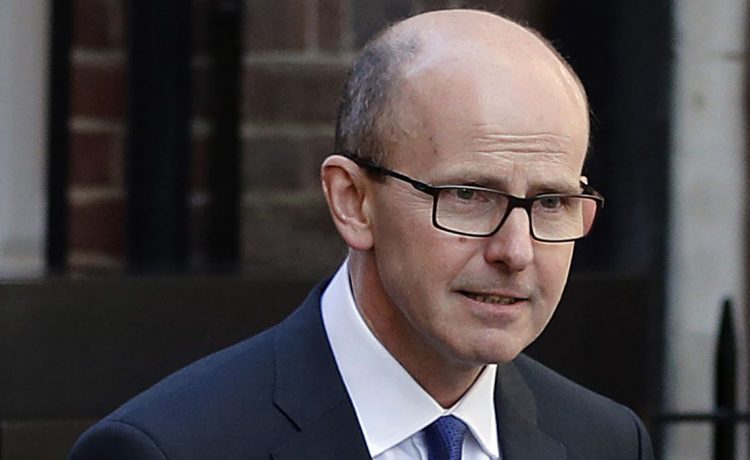 China is using a combination of fear, coercion and advanced technology to reshape the world according to its anti-democratic system, the head of Britain’s electronic spy agency warned Tuesday.

Jeremy Fleming, director of the Government Communications Headquarters, known as GCHQ, said in a speech that the ruling Chinese Communist Party is seeking to dominate technologies for use in advancing its vision of population control at home and rising power abroad.

“Technology has become not just an area for opportunity, for competition and for collaboration, it’s become a battleground for control, values and influence,” said Mr. Fleming in a rare public address in London.

Mr. Fleming said threats are changing rapidly and include cybercrime, Russia’s war in Ukraine and “gray zone” conflict below the level of armed conflict. But the most serious problem today comes from the growing strength of China with “the Chinese Communist Party that’s at the heart of the issues we face,” he said.

“So, we must also be clear that when it comes to technology, the politically-motivated actions of the Chinese state are an increasingly urgent problem we have to acknowledge and address,” Mr. Fleming said.

The problem transcends science and technology and ultimately is “about our way of life.”

While the West views technology as enabling greater freedom and prosperity, “the Chinese leadership’s approach is to also see it as a tool to gain advantage through control: of their markets, of those in their sphere of influence, and of course of their own citizens,” Mr. Fleming said.

“Without the collective action of like-minded allies, the divergent values of the Chinese state will be exported through technology,” he added.

Chinese leaders regard technology advancement as essential to development. The CCP, however, is also using technology as a population-control tool and to expand its military and intelligence services to project power and influence beyond China‘s borders.

China is working to upend the current rules of international security “in ways frankly that none of us have ever faced before,” he said.

One-party rule in China has resulted in Chinese leaders viewing all other nations as “either potential adversaries or potential client states, to be threatened, bribed or coerced,” the GCHQ chief said.

China’s leaders, however, operate in fear of their own citizens, and oppose freedom of speech, free trade and open technology standards and alliances, what Mr. Fleming called “the whole open, democratic order and the international rules-based system.”

Chinese officials are also seeking a centralized digital currency that can be used to control citizens at home and potentially evade international sanctions in the future, such as those currently applied to Russia for its war in Ukraine.

“Be in no doubt, the Chinese Communist Party is learning the lessons from that conflict,” Mr. Fleming said.

China also is seeking to control space. Its alternative to GPS, the BeiDou system, is rapidly expanding and is being used in navigation for aircraft and submarines and guidance for Chinese missiles.

“The party has used every lever to force Chinese citizens and businesses to adopt [BeiDou] — and for it to be built into Chinese exports to more than 120 countries now around the world,” Mr. Fleming said.

China’s leaders believe communist rule is a key strength. But Mr. Fleming said control is no substitute for the advantage provided by empowered citizens, open societies and secure alliances.

“Nonetheless, that paradox of great strength combined with fear is driving China into actions that could represent a huge threat to us all,” he said.

“I count myself lucky to live in a free democratic society, open for global trade with truly collaborative global partnerships,” Mr. Fleming said. “While the Communist Party in China sees weakness in how we choose to live, we know that this is in fact the source of our strength.”

The GCHQ director called for more “deep investments” in next-generation national security technology, such as quantum computing. Taiwan’s world-class semiconductor capabilities are vital for products and cannot be duplicated. Thus, the island must not be allowed to fall into Chinese hands, Mr. Fleming said.

The value of Taiwan’s semiconductor supplies is a key reason the British government has shifted its national security and defense efforts to the Indo-Pacific region, he said.

China’s domination of technology is not inevitable and the West must recognize the threat posed by China and bolster alternatives to the Chinese authoritarian model, Mr. Fleming said. China, by contrast, needs to be shown the advantages of working within the global system.

“If it does so, it can help to co-create the rules of tomorrow. But if it chooses not to, to play a disruptive role in international security, technology and markets, then that will come at a cost, too,” he said.

The British spy agency is working to understand the risks and threats posed by Beijing’s tech policies and what partnerships and norms are needed to strengthen the democratic system.

“At GCHQ, it is our privilege and duty to help the nation navigate the ‘sliding-door moments’ of history,” Mr. Fleming concluded. “This feels like one of those times. Our future strategic tech advantage rests on what we as a community do next.”