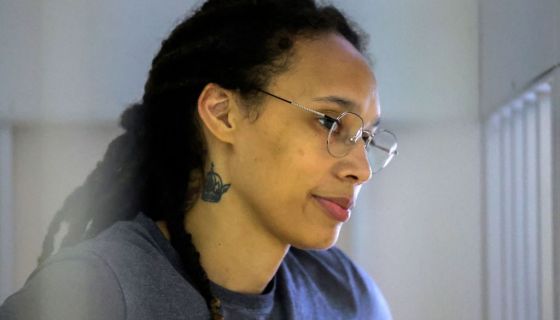 We have to keep fighting for Brittney Griner.

After being sentenced to nine years in prison in August, the WNBA star’s appeal was denied in late October, and she was moved to a labor camp earlier this month. Now, Griner has been taken to a penal colony in the Russian region of Mordovia, according to Reuters, and that means the possibility she will be subject to harsh working conditions and treatment that at least borders on inhumane.

Previously we reported that as calls mounted for U.S. authorities to negotiate Griner’s release and return to the states, the U.S. and Russian governments had agreed to a prisoner exchange and the release of Trevor Reed, a former Marine who was imprisoned in Moscow after being convicted in 2019 of assaulting a Russian police officer—a far lesser “crime” than getting caught at a Russiam airport with hashish oil in vape cartridges.

Recently, Reed’s father, Joey Reed, spoke to the New York Post about what his son endured during the nearly 1,000 days he spent detained in Russia.

“You gotta understand, the labor camps in Mordovia, these are pre-Stalin-era prisons, these were literally referred to as gulags,” Joey said. “And even though there’s a federal authority for prisons, each warden has wide leeway to do whatever they want until it makes someone angry or leads to bad press.”

Reed, 62, said his son often described a dour, medieval atmosphere inside the penal colony where Trevor, now 31, lived in crude barracks built of brick and sheet metal. He routinely curled up near hot water pipes or piled on extra clothes during frigid nights in the desolate Mordovian plains, where January temps average in the low teens. When guards threatened to forcibly disrobe his son, Trevor threatened them back, his father said.

“They said they would take them off him and he said, ‘I will take you out trying,’” said Reed, of Granbury, Texas. “But the guards never beat or abused him because they knew he was on the trading block.

“To a certain extent, you’re starved just by the food that they give you. We didn’t show any public photos of my son for about a month and a half because he looked like a concentration camp victim.”

Daniel Balson, Amnesty International USA’s advocacy director for Europe and Central Asia, told the Post that penal colony inmates in Russia only get six phone calls per year and that “the Russian prison system has been subjected to the highest number of complaints to human rights monitors.”

What has happened and continues to happen to Griner should infuriate human rights advocates everywhere. There’s no legal system in the world that should be allowed to operate this way and still call itself a system of justice.

Free Brittney Griner. We can’t stop speaking out no matter how grim things get.