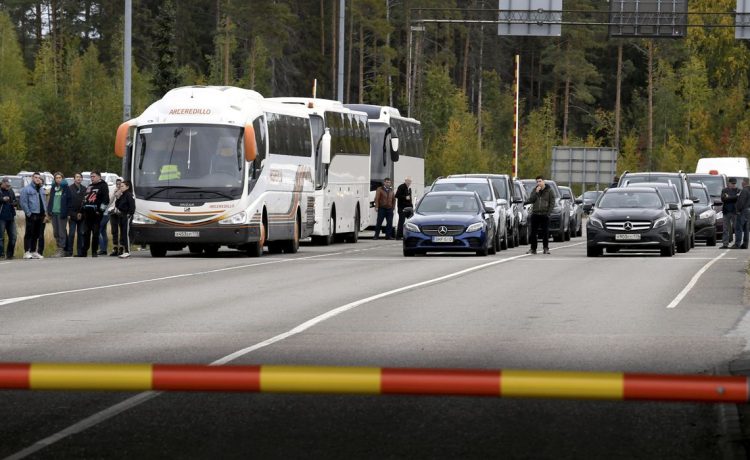 As walls go, it’s shaping up to be far less imposing than the Berlin Wall and not nearly as politically divisive as former President Donald Trump’s coveted barrier between the U.S. and Mexico.

But Finland’s planned border fence with Russia looks to be a major geopolitical statement, one that could fuel even greater tensions between the Kremlin and the West while signaling that Russia’s war in Ukraine may have forever altered Europe’s attitude toward its hostile neighbor.

Finnish border guard officials announced recently that they will begin construction next spring on a nearly two-mile stretch of fence on the Finland-Russia border near the eastern town of Imatra, according to Euronews and other media outlets. Beyond that initial construction, Finnish leaders earlier this month proposed spending up to $143 million to build many more miles of border fence along the country’s boundary with Russia, with the fence eventually stretching well over 100 miles.

If completed, such a fence could cover between 10% and 20% of Finland’s 833-mile border with Russia, the largest such boundary that any European nation shares with Russia.

The project comes as both Finland and Sweden wait for final approval on their accession into NATO, a move that has riled Moscow and even led to veiled threats of further Russian military action against its neighbors. NATO officials are pushing for the two nations to fully join the alliance as soon as possible, though continued disputes with NATO member Turkey are holding up the process.

For Russian President Vladimir Putin, the proposed fence would be just the latest unwanted blowback from his fateful decision to invade Ukraine nine months ago. The Russian leader blamed NATO expansion over the past two decades as one reason he ordered the invasion, but the war has proven far more difficult than he imagined, NATO has remained united, and is expanding even faster and farther because of the Ukraine war.

For their part, Finnish officials have avoided directly tying the border fence project to either the war in Ukraine or their country’s NATO bid.

“Once completed, the barrier fence at the eastern border will provide significant added value for border surveillance and will be very important for the management of situations and operational efficiency,” Col. Vesa Blomqvist, commander of the Southeast Finland Border Guard District, said in a recent statement. “By exposing, blocking, slowing down and guiding people’s movement at the border, the fence will give border guard patrols more time to react and make it easier to manage disturbances. The road to be built next to the fence will enable us to influence the target area more quickly.”

The fence will be roughly nine feet high, Finnish officials said, and lighting and speakers will be installed “in the most important target areas.”

The first stretch will serve as a pilot project, border officials said, and will guide future efforts to build additional barriers across southeast Finland and along other sections of the Russia-Finland border. Much of the border between the two countries is densely forested areas that see little human traffic.

While there’s been no public link drawn between the war in Ukraine and the border fence proposal, it’s clear that the dynamic between Russia and Scandinavian nations has changed dramatically since February. Indeed, even as Helsinki and Stockholm wait for their NATO bids to be fully approved, NATO leaders say the alliance would almost surely come to their aid in the event of any Russian attack.

“Finland and Sweden are in a very different place now than before they applied because since they applied in May, what you have seen is that NATO has increased in its presence in the region,” NATO Secretary-General Jens Stoltenberg said at a Friday press conference. “And 28 allies have ratified the accession protocols. And the fact that they participate in almost all NATO activities, civilian and military, makes it absolutely clear that if there was any attack or aggressive action against Finland or Sweden, it is inconceivable that NATO will not react.

“So yes, I would like to see the final ratifications, but we have come a very long way in a very short time … when it comes to accession of Finland and Sweden,” he said.

All NATO nations must approve the bids. Most already have, but Turkey has said it will not sign off on the accession until Finland and Sweden take additional steps to extradite alleged Kurdish militant-linked individuals  back to Turkey and enact other measures to crack down on groups that Turkey considers a threat to its own country.

The three nations signed a memorandum in July that seemingly paved the way for Turkish approval, but Ankara in recent days has signaled that it hasn’t seen enough from Stockholm or Helsinki. Mr. Stoltenberg expressed optimism Friday that the process will soon reach the finish line.

Meanwhile, Moscow has been flaunting new naval capabilities it intends to use in Arctic waters not far from Finland. On Wednesday, Mr. Putin spoke via video at a St. Petersburg ceremony marking the launch of two new nuclear-powered icebreakers that the Russian leader said can operate year-round in the Arctic.

“Both icebreakers were laid down as part of a large serial project and are part of our large-scale, systematic work to re-equip and replenish the domestic icebreaker fleet, to strengthen Russia’s status as a great Arctic power,” Mr. Putin said at the ceremony, according to Reuters.

But analysts say that bringing Finland and Sweden into NATO would likely impact any future decisions by the Kremlin to expand its war beyond Ukraine. Pushing into the Baltics, for example, would become a much costlier proposition for the Russian military if Finland and Sweden were to join the conflict.

“The ratification of these two nations needs to move forward without delay,” Courtney Stiles Herdt, a military fellow at the Center for Strategic and International Studies’ International Security Program, wrote in a recent analysis. “Elevating them from strong partners to alliance members changes the calculus of a Baltic conflict significantly. The alliance can immediately leverage these two nations to increase strategic depth.”