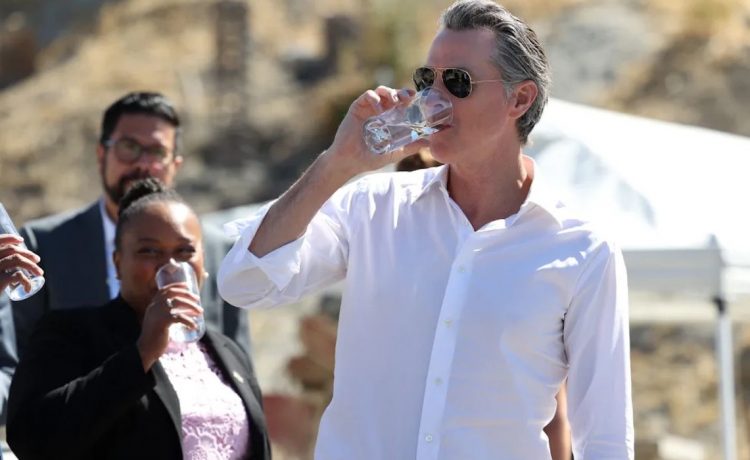 Standing outside a desalination project in Antioch, the governor outlined strategies in a 16-page document focused on accelerating infrastructure projects as opposed to hiking conservation targets, saying that he wants to tackle the issue “not just from a scarcity mindset.”

In its release, the governor’s office warned that “extreme weather patterns caused by climate change” could cause the state to lose up to 10% of its water supply by 2040, but that the proposed actions could add enough water to cover 8.4 million households by 2040.

“These actions are identified broadly in the Newsom Administration’s Water Resilience Portfolio — the state’s master plan for water released in 2020 — but they will be expedited given the urgency of climate-driven changes,” said the governor’s office.

The Democratic governor also took a page from the Republican playbook by taking a shot at the environmental regulations that delay infrastructure projects, saying he would bulldoze through the “regulatory thickets” and fast-track the agenda through executive orders and legislative efforts.

“The time to get these damn projects is ridiculous. It’s absurd. It’s reasonably comedic,” Mr. Newsom said. “And in so many ways, the world we invented from an environmental perspective is getting in the way in moving these projects forward so we can address the acuities of Mother Nature. Permits that take years and years and years.”

Climate change means drought won’t just stick around for a little bit — it’s a permanent fixture in the West.

This goes beyond conservation. California has a plan to help us store and create more water to adapt to this new reality.https://t.co/5afNf4I5Ux

From reducing regulations to building reservoirs, there was plenty in his plan to raise the hackles of the state’s powerful environmental movement, but Mr. Newsom stressed that the state needs to get away from the constant focus on scarcity.

“We’ve got to get away from that mindset,” he said. “There’s a lot more abundance out there if we’re more creative in terms of how we approach things.”

The biggest-ticket item was $27 billion by 2040 to reach the plan’s targets for recycling wastewater into drinking water. Much of the rest of the strategy would be funded by billions already earmarked by the state legislature, as well as $7.2 billion from Proposition 1, the 2014 state water bond, for seven projects.

The state is now stuck in a third straight year of drought, but Mr. Newsom has resisted state conservation mandates, calling last year for residents to reduce voluntarily their water consumption by 15%.

So far Californians haven’t hit the target. Statewide water consumption fell by 7.6% in June relative to the June 2020 benchmark, according to the State Water Resources Control Board.

“Although we are now trending toward saving more water, we need to make up for lost ground from past months to meet the 15% statewide conservation goal,” said the board in an Aug. 2 statement.  “Doing so will require more water action on everyone’s part.”