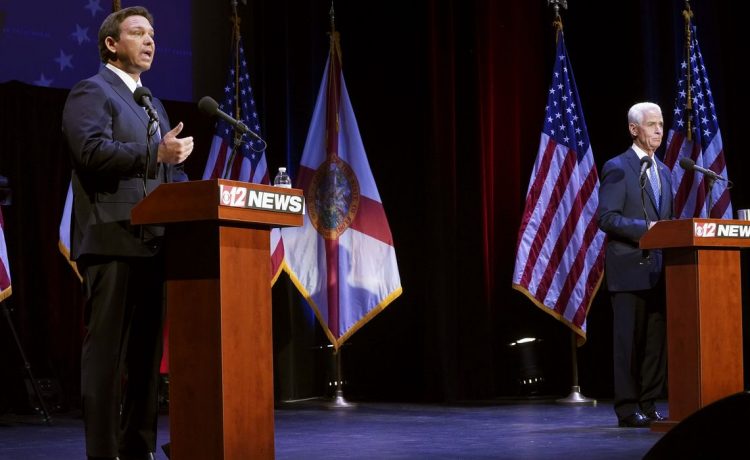 In the only debate in Florida’s race for governor, Democrat Charlie Crist twice asked incumbent Republican Ron DeSantis a question many are wondering: Does he plan to run for president in 2024?

Mr. DeSantis, who leads Mr. Crist in the polls and is eyed as a top GOP White House contender, didn’t respond directly to his opponent’s question, but said he planned to put Mr. Crist “out to pasture,” and called him “a worn-out old donkey.”

He also noted that the 66-year-old Mr. Crist, who served in Congress until August, only showed up for work in Washington 14 days this year.

The exchange marked one of many attempts by Mr. Crist to take down Mr. DeSantis, who has stayed well ahead of Mr. Crist in polls throughout the campaign, enjoys solid approval ratings and is favored to win a second term on Nov. 8.

A strong victory for Mr. DeSantis, 44, will only make him a more appealing Republican presidential candidate in 2024 and Mr. Crist has touted himself as the only one who can block his ascension.

Mr. Crist attacked Mr. DeSantis as “so arrogant” for ignoring health officials who advised school closures and mask and vaccine mandates during the pandemic, and he blamed Mr. DeSantis for high inflation and gas prices, which most economists tie to the policies of the Biden administration.

He also said Mr. DeSantis doesn’t respect women, parents or teachers and failed to address the property-insurance crisis that has caused premiums in the Sunshine State to skyrocket.

Mr. Crist criticized the GOP governor for keeping the state open during the COVID pandemic, pointing out 82,000 people in the state died from causes related to the virus.

“The governor wants to talk about how we reopened this, and we reopened that,” Mr. Crist said. “You can keep things opened, but you have got to do it with an eye toward what health-care providers tell you.”

Mr. Crist and Mr. DeSantis are battling in one of the most closely watched governor’s races in the country.

Mr. DeSantis won his first term by fewer than 33,000 votes and Florida GOP insiders believe he’s vying for a much bigger victory this time to help solidify his political strength.

He has led nearly all Republican presidential-primary polls that do not include former President Donald Trump as a candidate.

Mr. DeSantis has raised near-record sums for a governor’s race and has been able to saturate the airwaves with campaign advertising a “freedom agenda” that kept businesses and schools open during the COVID pandemic while providing raises for teachers and first responders and significant funding for environmental projects.

He’s also taken on “woke” corporate training and school curricula and become a regular critic of the Biden administration.

His lead in the governor’s contest has grown in the closing weeks of the race.

A Florida Atlantic University Poll released last week showed Mr. DeSantis ahead of Mr. Crist by 11 points among likely voters. Mr. DeSantis garnered a 53% approval rating overall in the poll, and a 63% approval rating for his response to Hurricane Ian, which devastated the state’s southwest coast in late September.

Mr. Crist, who represented the state’s 13th district in the U.S. House from 2017 until his resignation in August, was Florida’s governor from 2007 until 2011. Initially a Republican, he has switched parties twice, first to an independent, then to a Democrat.

His campaign strategy includes seeking out-of-state campaign cash by touting his victory as a way to handicap Mr. DeSantis’s 2024 chances. He has tried to define Mr. DeSantis as a fascist with a hateful agenda.

Florida’s electorate shows nearly 300,000 more registered Republicans than registered Democrats, but unaffiliated voters have also increased significantly and make up more than a quarter of all voters.