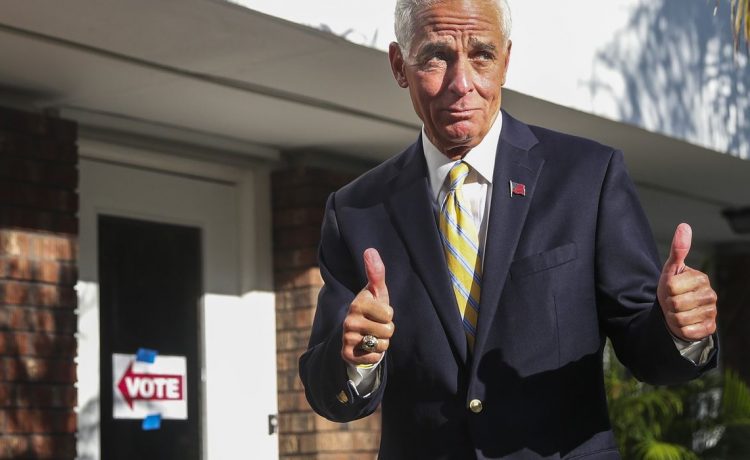 Mr. Crist defeated Agriculture Commissioner Nikki Fried, who struggled to break through against Mr. Crist’s consistent poll leads and a broad range of endorsements by party and union leaders who saw him as the strongest candidate to take on Mr. DeSantis in November.

Mr. Crist served as Florida’s governor from 2007 until 2011, first as a Republican, then as an independent.

He became a Democrat in 2012 and is running for another term as governor of the Sunshine State on a solidly Democratic agenda that includes green energy initiatives, criminal justice reform, protecting abortion access and legalizing marijuana use.

After handily defeating Ms. Fried, Mr. Crist faces a bigger challenge in November when he takes on a popular GOP governor in a state that has experienced a massive surge in Republican voters who now outnumber registered Democrats by more than 200,000 people.

General-election polling taken before the primary shows Mr. DeSantis with a consistent lead of about 6 percentage points over Mr. Crist, although some Democratic polling shows a narrower race.

The Florida primary was among a handful of nationwide primaries held Tuesday, most notable among them being a bitter battle between two long-time incumbent House Democrats in New York City who were squeezed into the same district after redistricting to accommodate a lost House seat.

An Emerson College poll showed Mrs. Maloney leading Mr. Nadler by 10 points back in May. But Mr. Nadler leapfrogged ahead of his Democratic rival in an August poll, also conducted by Emerson, that found him 20 points ahead of Mrs. Maloney.

In Oklahoma, voters went to the polls in a special Republican primary runoff to determine who will run on the November ballot to fill the rest of Sen. Jim Inhofe’s term. Mr. Inhofe, a Republican, plans to retire at the end of the year but his term does not expire until after the 2026 midterm election.

Mr. Mullin represents the state’s 2nd Congressional District in the U.S. House and he is endorsed by former President Donald Trump.

Mr. Shannon is a former member of the Oklahoma House of Representatives and was the chamber’s first Black speaker.

In the June primary, Mr. Mullin led with 43% of the vote and Mr. Shannon placed second with 17%, but a runoff is necessary because nobody got 50%. The winner of the primary runoff will face former House Rep. Kendra Horn in November.

Oklahoma has not elected a Republican to the U.S. Senate since 1990. The non-partisan Cook Political report rates the seat “Solid Republican” for the midterm election.