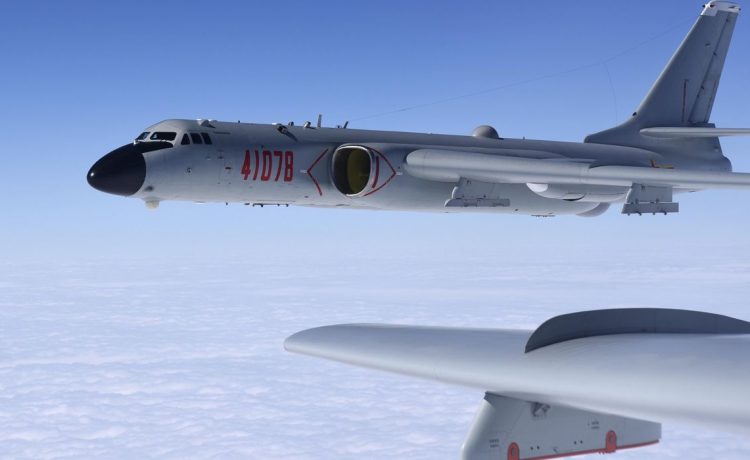 A total of 21 Chinese military aircraft entered the skies around Taiwan during the 24 hours leading up to Tuesday morning, days after Beijing increased its ban on certain Taiwanese food, fishery and other imports.

The aircraft incursion follows months of increased Chinese military activity around Taiwan and represented the largest daily sortie of Chinese H-6 bombers over the island since Taipei began releasing daily incursion data in 2020, according to Agence France-Presse.

The development coincides with U.S.-China tension over Taiwan that has risen since House Speaker Nancy Pelosi visited the island in August. China expressed outrage over the visit and responded by expanding military drills and missile tests near Taiwan.

The Chinese Communist Party-ruled government in Beijing has said its goal is to absorb the U.S.-backed island. Chinese President Xi Jinping has warned since 2019 that Beijing could use force to dissolve Taiwan’s democracy and absorb it under the mainland’s rule.

The U.S. and allied democracies in Asia have responded to the threats by increasing their own military moves through the Taiwan Strait between the island and mainland China.

The Benfold transited the strait on Nov. 5, the fourth transit of a U.S. warship since July, according to USNI, the U.S. Naval Institute’s online news and analysis portal.

USNI has noted that the cruisers Antietam and Chancellorsville transited the strait in August, with the destroyer Higgins passing through in September.

Most regional analysts say China is unlikely to militarily invade Taiwan and is using military airspace incursions to support economic and diplomatic pressure amid the goal of controlling the island.

However, Taiwanese officials warn that the world must prepare for a Chinese invasion as soon as next year.

Taiwanese Foreign Minister Joseph Wu told reporters in late September that Taiwan’s people and defense forces are drawing inspiration from Ukraine’s fight against Russia as they confront the idea of an attack by China.

Mr. Wu asserted that China’s expansion of military drills and missile tests near Taiwan after Mrs. Pelosi’s visit were clear signals that Beijing was practicing for a “future invasion.”