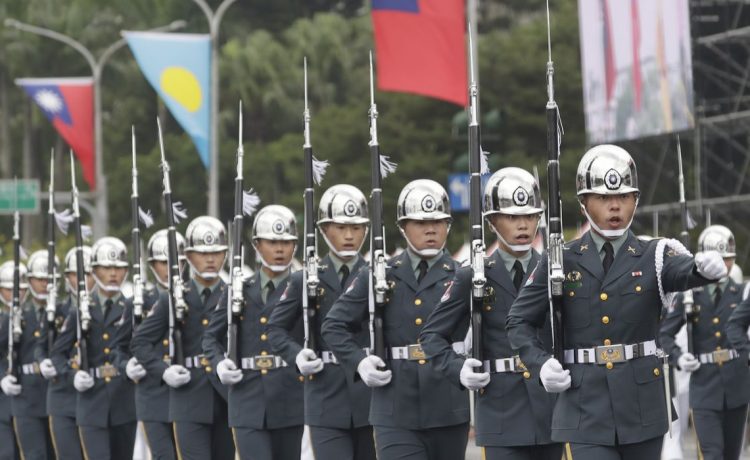 The second in a three-part series: Taiwan in the Crosshairs examines how the island and its nearly 24 million people are holding up under pressure from Beijing’s stepped-up diplomatic and military intimidation campaign. Read part one here.

TAIPEI, Taiwan | China’s threat to absorb Taiwan — through possible military action if necessary — has sent nerves soaring in this city, while also sparking debate a half a world away in Washington over the long-held U.S. policy of “strategic ambiguity” over just exactly what the American military would do to protect the island democracy from a Chinese invasion.

With President Biden responding to increased Chinese military drills near Taiwan by saying U.S. forces will defend the island in the event of an “unprecedented attack,” some argue the era of strategic ambiguity is already over. Beijing and Washington have traded charges over which one is trying unilaterally to change the status quo.

However, Mr. Biden’s aides continue to insist that U.S. policy of being deliberately vague on the matter has not actually changed, leading others to claim Mr. Biden only further muddled a policy that deserves clarification in the face of Beijing’s growing threats.

A parallel debate is playing out here in Taiwan’s bustling, modern capital, where officials often admit in private that they wish their government would more aggressively declare independence from China on the world stage but are wary that doing so would only provoke Beijing to launch a war to “reclaim” the island under the control of the Communist regime on the mainland.

The result leaves the nearly 24 million citizens of Taiwan, which has had a separate government from Beijing since 1949, existing in a kind of netherworld of the international order.

On one hand, Taiwan effectively operates as an independent country, with a government, regular elections and an economy that ranks among the most advanced and prosperous in the world. On the other, Taipei tolerates a decades-old status quo in which Beijing claims it as a sovereign territory, while most of the world, including the United States, does not technically recognize Taiwanese independence from China.

“I think it’s like 6%t [of Taiwanese] people that would support immediate independence, to change the country’s name to Taiwan [or] to the Republic of Taiwan or something like that,” says Catherine Hsu, a Taiwanese Foreign Ministry spokesperson. “Eighty-five percent of the people would support [keeping the] status quo.”

“There is no need for the government and for our people to reclaim independence because we are already an independent country,” Ms. Hsu told a group of international journalists on a recent visit to Taiwan sponsored by the ministry. “We have our own freely elected government,”

“It is actually the rest of the world and also the U.N. agencies,” she said. “They need to revisit this issue.”

The issue of Taiwan’s status has been vexing for the Biden administration since August when China responded to a visit by House Speaker Nancy Pelosi — the highest U.S. official to travel to Taipei in a quarter century — by dramatically expanding the scope of its military drills and missile tests near the island.

China’s Foreign Ministry bristled, saying the visit would have “a severe impact on the political foundation of China-U.S. relations” and sent “a seriously wrong signal to the separatist forces for ‘Taiwan independence.’” Chinese President Xi Jinping reportedly appealed directly to President Biden to call off the visit by Mrs. Pelosi and her congressional delegation.

“There is but one China in the world,” the ministry said. “Taiwan is an inalienable part of China’s territory.”

The Biden administration says it is committed to the so-called “One China” policy, under which Washington has long acknowledged Beijing’s position that Taiwan is part of China, even though the U.S. maintains informal diplomatic relations and substantial defense ties with Taipei and does not technically recognize Chinese sovereignty over it.

Taiwan and the U.S. have close economic ties. American companies are heavily tied to Taiwan, which is the world’s leading manufacturer of semiconductor chips, which are not only vital to the global production of everything from smartphones, laptop computers, and refrigerators, but also relied upon by the U.S. defense industry.

A State Department fact sheet circulated in May underscored the importance of Taiwan’s semiconductor industry. But even that
fact sheet included the disclaimer that U.S. officials “do not support Taiwan independence,” but “expect cross-Strait differences to be resolved by peaceful means.” It said Washington continues to “oppose any unilateral changes to the status quo from either side.”

Such language underpins the wider U.S. policy of “strategic ambiguity,” according to analysts, who say the approach is rooted in a long-held distinction between Washington’s “One China” policy and the Chinese Communist Party’s “One China” principle.

Beijing and Washington haven’t seen eye-to-eye on the matter since the aftermath of President Nixon’s historic 1972 China visit that opened the way for formal U.S.-China diplomatic relations. In sealing the shift of diplomatic recognition from Taipei to Beijing in 1979, the Carter administration dodged China’s demand that the U.S. recognize Chinese sovereignty over Taiwan.

U.S. officials resisted when China attempted to change the Chinese text version of the diplomatic formalization documents from the original “acknowledge” to “recognize,” according to a 2017 analysis by the Center for Strategic and International Studies. Then-Deputy Secretary of State Warren Christopher told a Senate hearing that U.S. officials “regard the English text as being the binding text” and “the word ‘acknowledge’ as being the word that is determinative for the U.S.”

That was followed by the passage of the Taiwan Relations Act in 1979, which said Washington “shall provide Taiwan with arms of a defensive character and shall maintain the capacity of the United States to resist any resort to force or other forms of coercion that would jeopardize the security, or social or economic system, of the people of Taiwan.”

However, the ambiguity of U.S. policy remained, as the law does not explicitly stipulate that the American forces will intervene militarily in the event of an attack on Taiwan.

With fears rising that China is now openly preparing for such an attack, Mr. Biden has faced pressure to clarify the policy.

The president told CBS News last month that his administration “there’s one China policy, and Taiwan makes their own judgments about their independence. We are not moving — we’re not encouraging their being independent. …That’s their decision.”

Asked specifically whether U.S. forces would defend the island, Mr. Biden responded: “Yes, if in fact there was an unprecedented attack.”

But CBS reported that after the interview, a White House official said U.S. policy on Taiwan has not changed.

It wasn’t the first time this year Mr. Biden called into question his commitment to the idea of keeping the world guessing about U.S. intentions regarding Taiwan. Speaking in Japan in May on his first tour of Asia as president, Mr. Biden said simply “Yes” when asked by a reporter if the U.S. would defend Taiwan, a reply which sparked another complaint from Beijing and another round of denials by aides of a shift in American policy.

The Biden administration’s approach has drawn criticism for leaving allies and adversaries alike uncertain of what U.S. policy actually is. Former Trump administration Secretary of State Mike Pompeo has called for official recognition of Taiwan’s independence. During a visit to Taiwan after Mr. Biden’s CBS interview, Mr. Pompeo accused Mr. Biden of making “muddled and confusing statements” about Washington’s policy.

“I’m confused,” said Mr. Pompeo. “Concerning America’s true commitment to Taiwan, the ambiguity that had been American policy has now become even more ambiguous,” he said, according to Taiwan’s official news agency.

Former Trump administration Defense Secretary Mark Esper went further in July, telling an audience in Taiwan that the U.S. “One China” policy has “outlived its usefulness.”

Andrew Scobell at the U.S. Institute of Peace argues it has long been strategically beneficial for Washington to remain ambiguous on the Taiwan issue.

While it may be “in our DNA in the U.S. to want to be clear and blunt,” said Mr. Scobell, “keeping China guessing leaves them unsure what the U.S. is going to do in any situation.”

“It’s been a deliberately ambiguous policy because Taiwan was the critical issue to be managed in rapprochement and normalization between the U.S. and China,” Mr. Scobell added. “Nixon and Henry Kissinger sort of tiptoed around this and kept it ambiguous by saying, ‘We acknowledge that China has their view that there’s one China,’ but we never said we the U.S. agrees.”

“China’s argument is that the U.S. has been duplicitous the whole time by pretending to agree with Beijing’s position,” he said. “But I think the U.S. perspective was that we acknowledged their position and that was contingent on China having a non-hostile policy toward Taiwan.”

While he added that “what China has been doing in recent months and years has been anything but peaceful,” Mr. Scobell said Washington should be cautious about dumping strategic ambiguity.

“Is it time to clarify the policy? My view is no, because clarity gets you into potentially hot water,” he said. “More clarity in the strategy leads us closer to a military confrontation.”

The U.S. debate is being watched closely by the government of Taiwanese President Tsai Ing-wen, who has for years called on democratic nations around the world to support Taiwan. She routinely refers to Taiwan as an “independent country,” although she has avoided pushing for a formal declaration of independence.

Taiwanese Foreign Minister Joseph Wu said recently that “there’s a lot of debate in Washington, D.C., about strategic clarity or strategic ambiguity,” asserting that “the two sides of these debates are coming out of the perspective of providing support to Taiwan, and both are highly appreciated.”

“And for former Secretary of State [Pompeo], who’s been talking about recognizing Taiwan or to be clear [on the] one China policy,…it is all appreciated,” said Mr. Wu.

But others suggest the U.S. could do more, arguing that China has coerced so many nations to support the “One China” principle that it has hobbled Taiwan’s ability to represent itself in vital international institutions, most notably the United Nations.

“China has long pressured the United Nations … to totally block Taiwan’s participation,” says Taiwanese Ministry of Foreign Affairs Secretary General Lily Hsu. “Taiwanese passport holders are not allowed to set foot on the U.N. premises simply because of their nationality.”

The Chinese Communist Party is on a “holy mission” to absorb Taiwan, according to Charles Lee, director of the Taiwan United Nations Alliance, a non-government organization in Taipei.

Long a source of contention between China and the U.S., the vibrant island democracy of Taiwan finds itself once more in the geopolitical crosshairs as Beijing has stepped up its diplomatic and military intimidation campaign in recent months. In a three-part series, Washington Times National Security Team Leader Guy Taylor traveled to Taiwan to examine how the island and its nearly 24 million people are holding up under the pressure. The series of exclusive articles looks at how the Taiwanese, especially the young, are reacting to China’s intimidation campaign, how Taiwan’s world-class semiconductor chip industry plays into the crisis and how the diplomatic understandings of the “One China” policy are facing unprecedented strains on both sides of the Pacific.