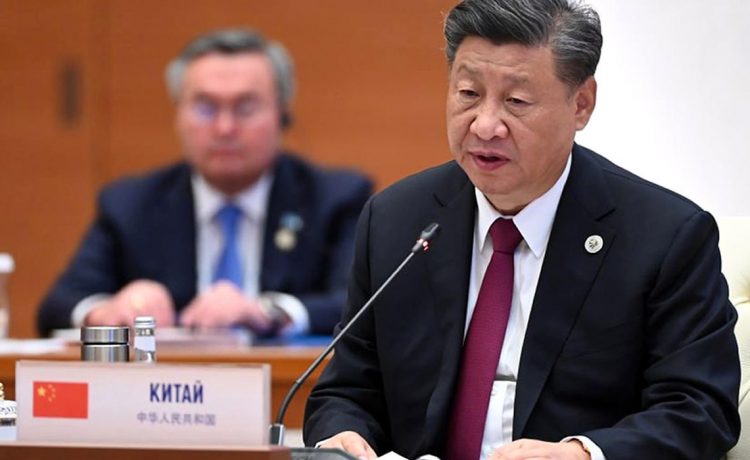 TAIPEI — A top Taiwanese official on relations with mainland China warned on Wednesday that Beijing under President Xi Jinping is embracing an extreme form of “closed-door nationalism” and “totalitarianism” that threatens not only the future of Taiwan but the U.S. and democracies everywhere.

The stark warning from Chui-Cheng Chiu, deputy chief of Taiwan’s Mainland Affairs Council, comes weeks ahead of an anticipated move by Mr. Xi to consolidate power at home and heightened U.S.-China tensions over the status of Taiwan and Mr. Xi’s vow to someday reclaim control of the island democracy.

Acrimony stemming from China’s expansion of military drills and missile tests near Taiwan to protest House Speaker Nancy Pelosi’s visit to the island last month surged anew Wednesday, with Vice President Kamala Harris vowing during a speech in Japan that Washington “will continue to support Taiwan’s self-defense” against Chinese provocations.

China contends the Biden administration’s rhetoric and a slew of visits by senior U.S. lawmakers and officials are undermining longstanding U.S. policy regarding China and Taiwan’s status. U.S. support for Taiwan has increased on Capitol Hill, but the White House accuses Beijing of “overreacting” to recent events.

“China is undermining key elements of the international rules-based order,” Ms. Harris Wednesday, speaking aboard the USS Howard destroyer at the U.S. Navy base in Yokosuka as part of a four-day trip to Asia. “China has flexed its military and economic might to coerce and intimidate its neighbors. And we have witnessed disturbing behavior in the East China Sea and in the South China Sea, and most recently, provocations across the Taiwan Strait.”

Just hours earlier, Mr. Chiu had told a small group of reporters in Taipei that he and other Taiwanese officials and citizens are facing “extreme suppression from China and there’s a possibility that China will annex Taiwan.”

“We need U.S. support in terms of military defenses, and Taiwan will also strengthen our military capabilities,” Mr. Chiu said during a meeting with journalists from international news outlets, including The Washington Times, who are visiting the island democracy on a program sponsored by the Taiwanese Ministry of Foreign Affairs.

Mr. Chiu predicted China “will only become more assertive and aggressive” toward Taiwan going forward, arguing that long-complicated dynamic between the two has become a central issue within a much bigger global power struggle between autocracy and freedom-oriented governments.

“In the past, Taiwan [was] on the front line facing China, now we are on the front line in the confrontation between authoritarianism and democracies,” he said, asserting Taiwan’s democracy can serve as a model for East Asia and the world. Taiwan’s economic success and political freedoms are a standing rebuke to Beijing’s Communist leadership, he argued.

Mr. Chiu said the stakes are particularly high ahead of the much anticipated mid-October 20th Chinese Communist Party Congress, which he said will serve to solidify Mr. Xi’s consolidation of power in Beijing and likely lead to more aggressive policies and rhetoric from China. Breaking with past practice, Mr. Xi is expected to secure a third five-year term as head of the CCP and of the government, centralizing power in a way not seen in decades.

Analysts say Mr. Xi sees bringing Taiwan under the mainland’s control as a top priority of his rule. The Chinese leader said in a major address a year ago that Taiwan’s “independence-separatism is the biggest obstacle to achieving the reunification of the motherland, and the most serious hidden danger to national rejuvenation,” adding that peaceful “reunification” is best but that the military option will always be on the table.

“The risk is that only a few people are making decisions, therefore they’re willing to take risks when making decisions and we see more assertive decisions and using war policy to face different situations,” the Taiwanese deputy minister said. He noted that Mr. Xi’s decade in power have already brought about a crackdown on pro-democracy forces in Hong Kong, a repression campaign against Muslim minorities in China’s Xinjiang province that the U.S. and others have labeled a genocide, and increasing military intimidation of Taiwan.

“China is developing in an extreme way. … China has been a socialist, left-wing country, but now they are implementing a national rejuvenation and they are using closed-door nationalism to boost and fuel their patriotism, and they are showing this in their expansion to the world,” he said. “We saw this in 19th century European countries. China is now attempting to compete with the U.S. and other hegemonies in the world. We see that in their militarization in the South China Sea, their destruction of Hong Kong’s democracy and the issues of Xinjiang and Taiwan.”

“China’s totalitarianism now is posing unprecedented threats to the free and democratic countries of the world,” Mr. Chiu added. “The extreme development of extremely centralized leadership and a fanatic nationalism will pose a grave threat to the rules-based order and liberal democracy.”

The comments, along with the remarks Wednesday by Mrs. Harris in Japan, are likely to trigger another harsh reaction from Beijing.

Chinese Foreign Minister Wang Yi warned after a meeting with Secretary of State Antony Blinken on the sidelines of the U.N. General Assembly that the United States has been sending “very wrong, dangerous signals” on Taiwan — and that the Taipei’s assertions of independence from China increase the likelihood of confrontation.

The Biden administration says it still adheres to the so-called “One China” policy — an approach in which Washington has long acknowledged Beijing’s position that Taiwan is part of China, even though the U.S. maintains informal diplomatic relations and substantial defense ties with the island democracy — but does not technically recognize Chinese sovereignty over it.

But Mr. Biden has repeatedly seemed to go beyond the “strategic ambiguity” of approach of past administrations over how exactly the U.S. would respond to a military attempt by China to seize Taiwan, including a “60 Minutes” interview just this month in which he said the U.S. military would come to Taiwan’s defense in the event of an “unprecedented attack” by the mainland. A Chinese Foreign Ministry spokesman said Mr. Biden’s comments “severely violate the commitment the U.S. made not to support Taiwan independence.”

Mr. Chiu on Wednesday said that he hoped there could be peaceful diplomacy between China and Taiwan, but asserted that it is Beijing that has for years been attempting to unilaterally change the status quo by demanding that Taipei recognize China’s sovereignty claim as a precondition to any talks toward resolving cross-Strait differences.

“Taiwan has not and will not accept this political precondition,” he said, adding that Taiwan “is a sovereign state” and “has never been part of the [People’s Republic of China].”

While Taiwan and China continue to have robust trade relations, diplomatic and people-to-people exchanges have curtailed dramatically since the onset of the COVID-19 pandemic. Taiwanese officials say that an average of roughly 580 civilian and other aircraft flights travel weekly between Taiwan and some 60 Chinese cities prior to pandemic lockdowns. During the period since the lockdowns began in early 2020, the number of flights has dropped to roughly 20 per week to just four Chinese cities.

Despite the restrictions, however, Mr. Chiu said Beijing is engaged in subversive cyber and information operations against Taiwan.

“China is conducting all kinds of cognitive warfare against Taiwan, especially in terms of disinformation,” he said. “Their purpose is to obstruct Taiwan’s society, our democratic system and make people go against the government [in Taipei].”

Mr. Chiu went on to say that Taiwanese officials “would like to express our greatest appreciation to the U.S. people, Congress, government and think tanks for supporting Taiwan.”

“Taiwan is more than willing to contribute to the international world, but China is now isolating Taiwan,” he added. “We hope that the U.S. can continue to establish a stronger world-based order to prevent China from undermining the peace and stability of the world.”