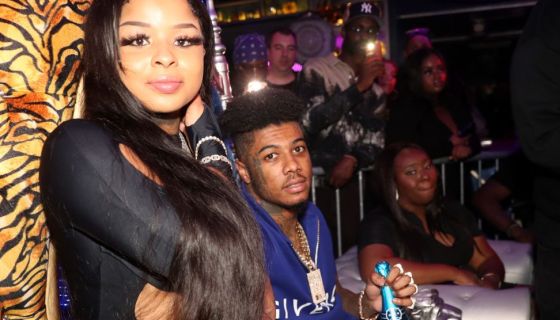 Baby announcements are usually cause for celebration, but despite Chrisean Rock revealing that she’s pregnant on Blueface’s birthday, it’s not exactly a happy occasion. 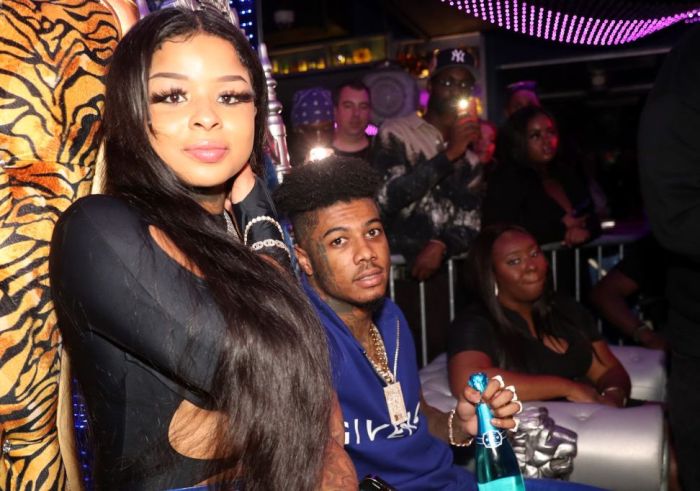 The Baddies star took to social media on Friday to share the news with the world.

“Guess how man heartbeats?” Chrisean wrote on on a picture of three different at-home pregnancy test sticks on her Instagram story.

If the multiple positive tests didn’t speak for themselves loudly enough, Chrisean took to Twitter to combine the baby bombshell with birthday wishes for Blueface. “Happy birthday Baby Daddy,” she posted.

Blueface responded to the news by saying that the on-again-off-again couple is definitely over. The California rapper Tweeted subliminal shade about liars before confirming that they split.

“To answer y’all questions yes me an rock are officially done it’s strictly business I tried it an clearly it wasn’t giving before she announces…she’s pregnant with somebody else’s child not mine,” Blueface wrote within a minute of Chrisean’s tweet referencing him.

“Rock has had encounters with 10 different men in the last year until I see DNA test then it’s not mine,” he added.

Chrisean clapped back, confirming that she wanted to keep the baby, but didn’t need a baby daddy to take care of business for her child.

“So what happens when you eat all ya evil words … I haven’t sexually been active with no one but u n plus there’s can a DNA test… n ion need yo money I got my own I don’t need a baby Daddy I’m just having this child because I don’t want to keep aborting,” she said.

Blueface doubled down on the accusations that his Crazy In Love co-star was a liar and a cheater. Although he’s known for partying right alongside Chrisean, Blue also questioned her lifestyle as an expectant mother.

“I know I know y’all thought she was all about me…me too lol but the facts are facts being my BM would be a blessing,” he fired back. “She must be currently drinking while pregnant that’s a red flag.”

“It’s not a Blueface baby,” he continued.

Chrisean shares her emotional reaction to the pregnancy news

Chrisean posted more excitement about the pregnancy on her Instagram story.

“The reason I’m so overwhelmed right now is because I’m deciding to keep it, obviously. I’m going to have a family! We’re going to have a big baby shower,” she said, tearing up at the thought of it.

“Hopefully, it’s three heartbeats. I want either twins or triplets because that’s how many I killed,” Chrisean continued, referencing her past abortions.

In subequent tweets, the former track star set the record straight about her relationship status and feelings about coparenting with Blueface.

“Promise you. I don’t need a cent from you . Then when we do a DNA test and it’s yours, just know I’ll tell my children you died so you wouldn’t have a[n] exuse to be in the child’s life. This is my baby, and that’s that.”

“We broke up befor knowing I was pregnant,” she explained. “I still ain’t do nothing sexually with any dude. I’ll be a dumbass if I didn’t know for certain.”

Before the social media meltdown, Chrisean and Blueface’s toxic tension boiled over during No Jumper interview

The “Vibe” rapper suspected that she was pregnant because she was even more emotional than usual. Despite that possibility, she immediately started drinking at the top of the No Jumper interview. Shortly after Blueface denied comparisons to Ike & Tina and Bobby & Whitney, tempers rose as the couple recounted their violent and a volatile outbursts on Crazy In Love.

The dysfunction was deep and on display. The interview went from a heated debate about verbal and physical abuse to a full-blown altercation. Chrisean said she felt gaslit by the way Blueface, Gina, and Sharp silenced and triggered her after she asked to change subjects. The harder it was for the 22-year-old to express herself, the more emotional and agitated she got.

Chrisean followed Blueface off the set when he stormed out during an argument. Blueface called for security to escort Chrisean out of the studio while he continues the interview alone. This only added more fuel to the fire.

Moments later, security guards physically picked up Chrisean to remove her. Furious and frustrated, she kicked and swung at everything in her path as she was dragged away. Chrisean went on to say she was pushed to her limit by things happening in private and that she “felt like nobody had her back.”

“It’s called a build up. Y’all don’t know what be happening behind closed doors, straight up. I’ll melt down every time I get a chance cuz dat sh*t hurt to my core.”

Blueface reacted on Twitter, saying that this outburst is how she always acts.

“Alcohol isn’t her problem her mentality is her problem all you people on here making excuses for a lack of self control an irrational behavior is contributing to the problem #accountability,” he wrote

“When she displays this type of irrational behavior on Baddies or Blue Girls CLub you guys applaud an cheer but when it’s a different setting an it doesn’t look as good. You guys want it to be everybody else’s fault. This is how she carry herself with or without me,” he continued.

Yikes! Hopefully, this baby on the way will inspire Chrisean to focus on turning her life around as a mother.