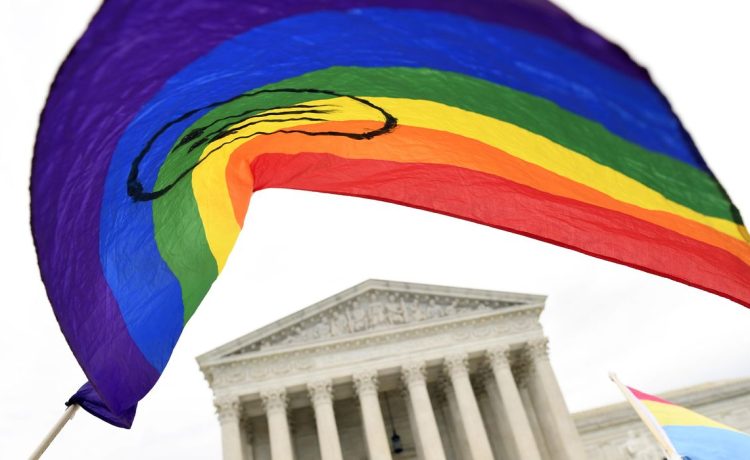 Christian bakers, artists and photographers from across the nation had a message Monday for Colorado website designer Lorie Smith: You’re not alone.

Mr. Adamson said he came to the nation’s capital “just to support Lorie.”

“I feel like the ability for all of us to create freely is so important so that our country can flourish,” he said in an interview with Alliance Defending Freedom media manager Bernadette Tasy outside the court. “So I’m here to support that for Lorie.”

Conservative groups held a morning rally by the courthouse steps, surrounded by supporters holding bunches of green-and-white balloons with the message “Create Freely,” along with left-wing protesters waving LGBTQ and transgender flags.

Foes also held signs with messages such as “ADF are Hypocrites,” “These Queers Bash Back,” and “Satanists for Religious Freedom,” as shown in video and photographs from the scene.

The high court is considering whether Colorado’s anti-discrimination law violates the free-speech rights of business owners like Ms. Smith, who wants to expand her 303 Creative website-and-graphics business to include weddings, but not same-sex ceremonies.

Mr. Phillips, who won a 2018 decision against the Colorado Civil Rights Commission over a same-sex wedding cake, is now fighting a civil lawsuit filed by a transgender attorney who wanted him to create a gender-transition cake. He declined.

The battle hasn’t been easy. “We’ve had just chaos, hateful emails, we’ve had death threats against us. It’s affected our business quite a bit,” said Mr. Phillips, who owns Masterpiece Cakeshop in Lakewood. “With ADF’s help, it’s easier.”

At the same time, “it’s been encouraging all the way, too, to see all the support we’ve gotten,” he said. “It’s an important principle that we’re all fighting for. The freedom of speech to be able to speak what you want and not be compelled to speak what you don’t want.”

Chelsey Nelson, a wedding photographer from Louisville, Kentucky, saw a federal district court rule in her favor in August in her battle against a city ordinance requiring her to photograph same-sex weddings if she does so for traditional ceremonies.

“I think when someone looks at my case, it makes so much sense,” she said. “Even if someone doesn’t agree with my specific views on marriage, it’s so obvious. Of course an artist should be able to create freely, and of course they shouldn’t be forced to give out a message in their art that is just very narrow, depending on what the government says it should be.”

She and other Christian creators have been accused of discriminating against LGBTQ customers, while the business owners argue that they draw the line not at the messenger but the message.

Mr. Adamson gave an example, saying that he made T-shirts for a lesbian band because he had no problem with the message the client sought to convey.

“What they asked me to do was something that was clear to my conscience,” he said. “So I printed the shirts for them, and they had a great event.”

Mr. Adamson also said he had turned down requests by a church for an image showing Jesus on a bucket of chicken, and by a pastor to print a shirt with an anti-homosexuality slogan. He said he wasn’t comfortable with either message.

“The thing is, I’ll work with anyone. It doesn’t matter who they are or what their belief systems are,” said Mr. Adamson, whose Hands On Originals shop is located in Lexington, Kentucky. “It’s all about the message that I’m asked to print. And that’s the line for me. If it goes against my beliefs, it’s just not something I can do.”

Ms. Smith is represented by attorneys for Alliance Defending Freedom.