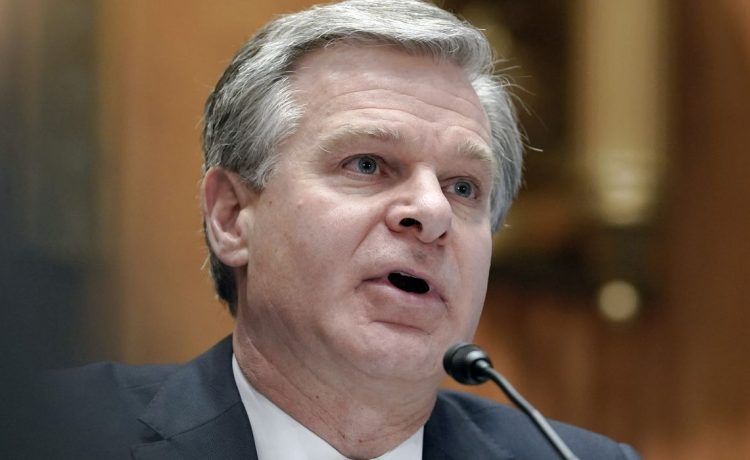 About 70% of the FBI’s abortion-related cases since the leak of the Supreme Court’s decision in Dobbs v. Jackson involve attacks and threats against pro-life facilities, according to FBI Director Christopher Wray.

Mr. Wray insisted in Thursday testimony before the Senate Homeland Security Committee that the bureau has treated violence against pro-life and pro-choice organizations equally while disclosing that anti-abortion groups have been the primary targets of post-Dobbs violence.

Citing the 70% figure, he said “we have quite a number of investigations as we speak into attacks or threats against pregnancy resource centers, faith-based organizations, and other pro-life organizations.”

“We’re going after that through that through our joint terrorism task forces, through our criminal authorities, FACE [Freedom of Access to Clinic Entrances] Act, and things like that,” Mr. Wray continued.

“We have about 20 field offices involved in this. So we take it very seriously. Again, I don’t care whether you’re motivated by pro-life views or pro-choice views, you don’t get to use violence to express it,” he said.

His comments came in response to questions by Sen. Rick Scott, Florida Republican, during the “Threats to the Homeland” hearing about accusations that the Justice Department has politicized its reaction to abortion-related incidents.

More than 100 pro-life offices, crisis pregnancy centers and Catholic churches have been attacked since the May 2 leak of the Dobbs decision, including incidents involving arson, vandalism and pro-choice graffiti.

The perpetrators in some cases left behind spray-painted messages referring to the radical pro-choice group Jane’s Revenge, but the FBI has announced no arrests in the cases.

Meanwhile, the bureau has arrested 26 pro-life activists in the last few months on charges related to the FACE Act, spurring fears that the Biden administration is weaponizing law-enforcement agencies against the pro-life movement.

“There’s a recent rise in high-profile investigations of pro-life Americans, which raises the current concern that the FBI is weaponizing federal law enforcement,” Mr. Scott said.

Mr. Wray said he was “glad you raised this topic because it gives me an opportunity to speak to it.”

“We have, [in] our view, my view, plainly expressed to all of our people, including in the context of abortion-related violence, is that I don’t care what side of the issue you’re on, you don’t get to engage in violence,” he said. “We are equal opportunity when it comes to that.”

The senator said he was frustrated by the bureau’s tight-lipped response to the bias claims.

“If you read the press, you would think that you guys are only going after pro-life groups and not going after groups that attack pro-life” groups, Mr. Scott said.

Under FBI policy, however, “we have to bite our lips and let the facts come out in the right way through court proceedings,” said Mr. Wray.