Chuck Schumer on ‘hot mic’: John Fetterman debate ‘didn’t hurt us too much’ 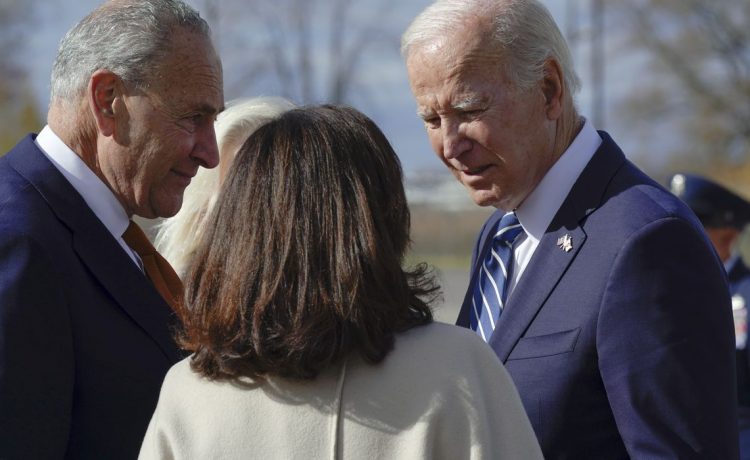 Senate Majority Leader Charles E. Schumer was caught Thursday on a “hot mic” telling President Biden that the rocky debate performance by John Fetterman in Pennsylvania “didn’t hurt us too much.”

Mr. Fetterman struggled at times to piece together coherent thoughts during the first and only debate Tuesday night against Republican nominee Mehmet Oz, leaving Democrats panicking that the recent stroke victim may lose the tight race that could determine control of the Senate.

“Looks like the debate didn’t hurt us too much in Pennsylvania,” Mr. Schumer, New York Democrat, told Mr. Biden during a visit by the president to his home state to stump for Democrats.

He could also be heard telling the president that Democrats are “picking up steam in Nevada,” where Democratic Sen. Catherine Cortez-Masto is in a tight race with GOP challenger Adam Laxalt.

As Mr. Schumer made his remarks, the president displayed a pair of crossed fingers.

Other remarks made by Mr. Schumer on an airplane tarmac were either inaudible or it was unclear what they were in reference to.

Mr. Fetterman, who suffered a stroke earlier this year, continues to have auditory processing issues as he recovers. He required the use of closed captioning during the debate so he could read the words being spoken.

His campaign later blamed his lackluster performance on the closed captioning system, a notion that the debate hosts fiercely rejected.

“I knew it wasn’t going to be easy having a stroke after five months. In fact, I don’t think that’s ever been done before in American political history,” Mr. Fetterman said at a campaign rally in Pittsburgh.