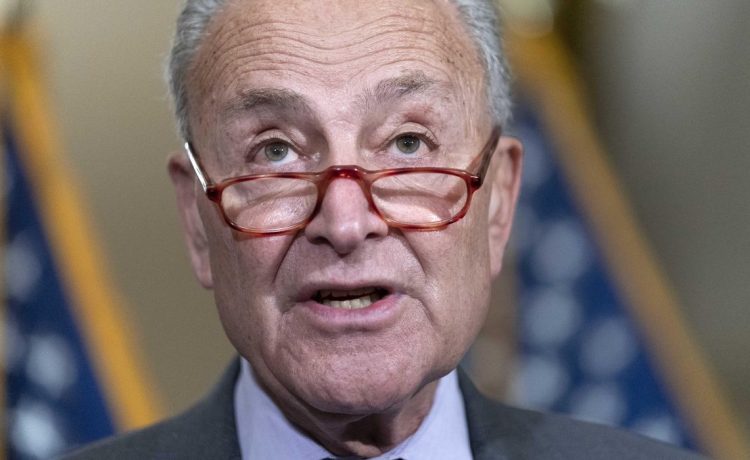 Mr. Schumer touted the Democrats’ victory in retaining control of the chamber, blaming GOP extremism on his party’s ability to hold on to key seats and flip Pennsylvania from red to blue.

“I have a plea for Republicans and advice. If you embrace MAGA, you’re going to keep losing. You’re going to lose more. The embrace of MAGA in 2018, 2020, and 2022 didn’t work,” he told reporters at the Capitol. “We welcome you to work with us on a bipartisan basis to get things done for the American people.”

Democrats secured control of the Senate with Nevada Sen. Catherine Cortez Masto’s defeat of Republican Adam Laxalt when the vote count finally showed a winner over the weekend.

The race gave Democrats 50 seats, which serves as the majority thanks to the tie-breaking vote of Vice President Kamala Harris, who presides over the 100-seat chamber.

The Senate race in Georgia will be decided in a Dec. 6 runoff election, determining whether Democrats achieve a 51-seat majority or continue to run an evenly divided Senate.

Mr. Schumer, New York Democrat, said he wants the next Congress to offer more bipartisan work on policy issues. He praised Republicans who have got on board with Democrats’ same-sex marriage bill, which needs at least 10 GOP votes to survive in the Senate.

He blamed Florida Sen. Rick Scott’s steering of the Senate Republicans’ campaign arm for the GOP’s downfall to flip seats in what was expected to be a bullish year for Republicans.

“If Republicans want to follow Rick Scott’s lead, make our day. Following Senator Scott is like following a blind man right over the cliff,” Mr. Schumer said. “It was Senator Scott who threatened to put Medicare and Social Security on the chopping block, which again was one of the most powerful arguments for why Republicans were wrong for the country.”

Mr. Scott’s office did not immediately respond to a request for comment.

Mr. Scott this year offered an agenda for Republicans that included a sunsetting of all major spending, including Medicare and Social Security, thereby requiring Congress to reauthorize those popular programs. Mr. Scott said those programs are headed for insolvency and to save them, Congress needs to be forced to act.

Democrats said he wanted to cut Medicare and Social Security, and they campaign heavily in opposition to the Scott plan for the midterms.

Democrats also hammered at Mr. Trump’s influence on the GOP, saying that is why the expected red wave fell short.

Many Trump-backed candidates who succeeded in the primaries lost to Democrats in the general election, despite voters who were unhappy with inflation and crime and gave President Biden low approval ratings.

“As everybody here knows, midterm elections are usually a referendum on the party in power. We expect there to be great headwinds, and this year was different. It was different for a number of reasons but at the forefront, it’s clear that there was a rejection of what I would describe as MAGA extremism,” said Sen. Tammy Baldwin, Wisconsin Democrat.

Mr. Trump, who is expected to announce his 2024 presidential run Tuesday night, remains front and center in the GOP, even if some Republicans are calling for a new direction.

Mr. Trump pushed back against criticism that he was responsible for the disappointing midterm results for Republicans, saying his name was not on the ballot.

“For those many people that are being fed the fake narrative from the corrupt media that I am angry about the midterms, don’t believe it,” he wrote on TruthSocial. “I am not at all angry, did a great job [I wasn’t the one running!], and am very busy looking into the future. Remember, I am a ‘stable genius.’”

“The American people clearly want us to work together. They want us to solve problems. And that’s the moment that we’re in now,” he said.