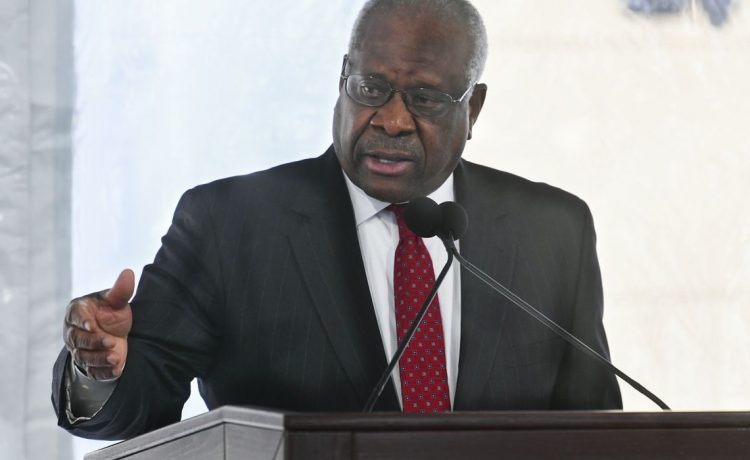 Justice Clarence Thomas has been on the Supreme Court for more than three decades, and his judicial philosophy rooted in adhering to the original meaning of the Constitution is finally controlling big rulings.

Yet he’s still cranking out opinions just like his days wandering in the legal desert of the liberal “living Constitution” era.

“He’s always been one to kind of identify problems that maybe the court hasn’t grappled with, or issues that need to be brought up,” said Carrie Severino, who clerked for the justice 15 years ago.  “It’s taken decades, he’s been on the court over 30 years now, but the court has ultimately been like ‘Oh, yeah, that is an issue we need to look at.’”

The difference between then and now, she said, is “you now see a majority of justices joining him.”

Justice Thomas will take the bench Monday for the start of the 2022-2023 term after his most influential year yet. He led colleagues in forcefully asserting Second Amendment gun rights and First Amendment religious free-exercise rights, and of course, defenestrating Roe v. Wade.

That 1973 decision had been the guide star of liberal legal scholarship for decades, yet it succumbed to Justice Thomas’s brand of originalism last year. Justice Samuel A. Alito Jr. wrote the chief opinion, saying it was time to undo years of wrong legal reasoning that had led to — and flowed from — Roe.

Justice Thomas joined the ruling, but wrote a concurring opinion to warn his colleagues that their job is not done. He said the same “substantive due process” right that Roe had relied on to establish a national right to abortion has been the basis for other decisions, on federal constitutional guarantees of access to contraception and same-sex marriage.

She said he likens the court’s use of precedent to justify later decisions with engineers adding more cars to a train.

“He’s like, ‘Look, you want me to add another car to this long train. I don’t even know where this train is going,  who’s driving this train. So what we need to do is trace it back, go forward one car at a time until we get to the very beginning, we find out what is going on,’” she said.

“Sometimes, he says, you’ll find there’s a chimpanzee driving it. We should not be adding more cases to this line of reasoning.”

That’s one reason why, at a time when his philosophy is controlling more of the court’s opinions, he’s still writing prolifically.

Adam Feldman, who runs Empirical SCOTUS, said Justice Thomas writes a separate opinion for every five cases on which he votes. That’s a full opinion ahead of the runner-up, Justice Sonia Sotomayor, the closest thing that the liberal wing of the court has to Justice Thomas.

Chief Justice John G. Roberts Jr., by contrast, writes a separate opinion just once in every 14.5 cases he votes on, according to Mr. Feldman’s data.

“Even when [Justice Thomas] agrees with the outcome, he will go further in asserting his own points of view,” Mr. Feldman said.

That’s particularly true when it comes to the use of stare decisis, the legal concept of fealty to precedent.

In the hands of many justices, it can be a shield to defend a position, or a weapon to attack a colleague’s position, depending on the needs of the moment. For Justice Thomas, it’s usually just an academic question to be surmounted.

“Thomas will go out and say, ‘I don’t think it’s just overturning the law in this case, I don’t think there’s a distinct place for stare decisis in our jurisprudence that requires our respect. If I don’t agree with it, I’m going to overturn it,’” Mr. Feldman said. “He takes it a step further.”

Over the last term, Justice Thomas wrote eight concurring opinions where he agreed with the outcome, but wanted to make his particular points, as in the abortion ruling. He had the highest concurrence rate on the court.

In the upcoming term, court-watchers figure Justice Thomas will play a significant role in looming cases involving voting rights, election procedures, affirmative action in college admissions and First Amendment challenges to laws that require service for same-sex marriages even when it conflicts with a business owner’s religious dictates.

That the 6-3 conservative court has tilted toward Justice Thomas is mostly a matter of math.

Justice Anthony M. Kennedy’s retirement and Ginsburg’s death opened up slots that have been filled by more conservative-leaning members, tilting a court from moderately originalist to aggressively originalist.

Justice Thomas has found a new voice in oral argument during the pandemic.

He was famously reticent to take part in the back-and-forth during oral arguments, and once went a decade without asking a question.

The New York Times sniffed that he’d given various explanations for his silence, but seemed to settle on one that it was rude to the litigants to interrupt and preen and prod, as has been the practice for oral argument in recent years.

When the pandemic struck, the court went to virtual hearings, and Chief Justice Roberts carved out specific time for each justice to ask questions, since talking over each other remotely would be a disaster. Justice Thomas, as the senior member of the court, got the first crack, and he began to engage again.

The court has gone back to in-person argument, but Chief Justice Roberts has maintained the structured format for each member to have a dedicated chance at questions, and Justice Thomas remains engaged.

“I think his colleagues recognized the value that added,” Ms. Severino said.

His success on the bench has led to a rocky summer.

George Washington University’s law school, where he has co-taught a constitutional law seminar for years, faced a rebellion of sorts from students who demanded he be fired.

The school rejected those calls, saying that while the justice’s views didn’t represent the school’s beliefs, an open debate was part of the point of education. But Justice Thomas himself then withdrew from teaching the class.

Meanwhile, an online petition circulated over the summer demanding the justice’s impeachment garnered more than a million backers, though Democrats on Capitol Hill dismissed the idea as a non-starter.

His wife Virginia “Ginni” Thomas has also been under scrutiny for communications surrounding the 2020 election and her attendance at the pro-Trump rally on Jan. 6, 2021. She testified Thursday to the House committee probing the mob attack on the U.S. Capitol later that day, reportedly telling lawmakers she believes the election was stolen.

She also said Justice Thomas doesn’t discuss his court work with her.

His detractors wonder whether the 74-year-old jurist will call it quits soon.