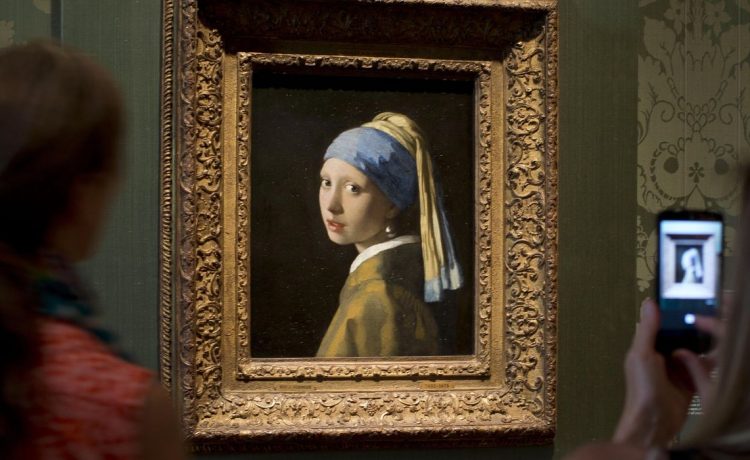 Climate activists continued with their art stunts Thursday when a protester glued his head to Johannes Vermeer’s “Girl with a Pearl Earring” in a Dutch gallery.

The incident, captured on video on Twitter, happened in the Mauritshuis gallery in The Hague, Netherlands.

Onlookers denounced the two protesters wearing “Just Stop Oil” shirts, one with his hand glued to a wall, the other with his head glued to the painting.

Having elicited the reaction they sought, the two provocateurs asked the throng in English “Do you feel outrage?”

“Good,” they answered. “Where is that feeling when you see the planet being destroyed before our very eyes?”

While the two visible protesters wore shirts saying “Just Stop Oil,” the U.K.-based activist group told art website Hyperallergic that “this is not an action that Just Stop Oil in the UK have organized. We applaud those ordinary everyday people who refuse to stand by, who step up to act.”

The painting was behind glass and thus undamaged.

“The condition of the painting has been investigated by our conservators. Fortunately, the glazed masterpiece was not damaged,” the museum said in a statement.

Both protesters depicted in the video, along with a third person, have been arrested by authorities in The Hague for public violence against property. The three men are Belgian nationals in their 40s, according to Reuters news agency.

“Art is defenseless, and the Mauritshuis firmly rejects attempts to damage it for any purpose whatsoever,” the museum reiterated, according to the Associated Press.