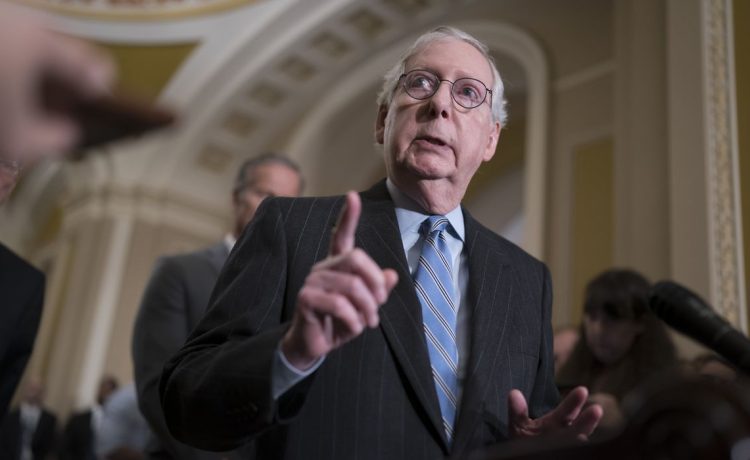 Congress passed a stopgap spending measure Thursday night to fund the federal government through Dec. 23 as it races to finish a long-term budget, narrowly avoiding a partial shutdown that was set to ensue at midnight on Friday.

The Senate approved the temporary funding legislation 71-19, sending it to President Biden’s desk for his signature.

The measure came as Democrats and Senate Republicans are working to finalize an agreement to pass a full budget to last through next September, despite objections from House Republicans that the GOP should wait until next month when the party retakes control of the lower chamber.

But approving a full budget is not a done deal.

Senate Minority Leader Mitch McConnell has warned Democrats that they have until the end of day Dec. 22 to get a budget passed, or else the Kentucky Republican will call for another stopgap measure to last into January — and GOP control of the House.

House Minority Leader Kevin McCarthy wants Senate Republicans to punt the issue until next Congress, a strategy that would create a messy fiscal policy fight between House Republicans and Senate Democrats.

Because of the Senate’s 60-vote filibuster threshold, Democrats need buy-in from at least 10 GOP senators to pass legislation but do not need any House Republicans.

The diverging approaches over how to fund the government have created a schism between Mr. McCarthy and Mr. McConnell.

McCarthy allies — and even some Senate Republicans — say that by making a deal with Democrats, Mr. McConnell and his leadership team are rolling over for out-of-control spending. Mr. McCarthy suggested Senate Republicans made the agreement because their chief appropriator, Sen. Richard Shelby of Alabama, is retiring at the end of his term.

Critics of Mr. McCarthy’s approach accuse the California Republican of playing politics to appease his base as he struggles to cobble together enough GOP votes to become the next speaker of the House.

“He’s running for speaker, and we understand that,” Mr. Shelby said. “But we all know the best thing to do is fund the government when you’re here. Whether you’re retiring or whether you got five more years, the problem remains the same. It’s irrational to shut down the government.”

Mr. McConnell has emphasized that with Democrats controlling Congress, they only had so much sway short of forcing a shutdown.

In addition, Senate Republicans say that if Mr. McCarthy is unable to lock down the speaker’s gavel, entrusting him with passing major spending legislation would likely end in a shutdown.