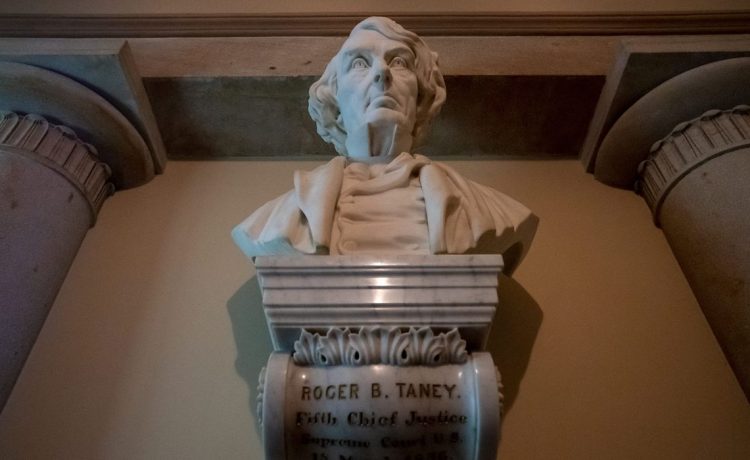 A statue of the pre-Civil War Supreme Court chief justice who wrote the infamous Dred Scott decision will soon be taken down from display at the U.S. Capitol.

The House passed a bill on Wednesday that would remove a statue of Maryland’s Roger Taney from public display, calling it “unsuitable for the honor of display to the many visitors to the Capitol.” The bill would replace the bust of Mr. Taney with one of Baltimore-born Thurgood Marshall, who in 1967 became the high court’s first Black justice.

“While the removal of Chief Justice Roger Brooke Taney’s bust from the Capitol does not relieve the Congress of the historical wrongs it committed to protect the institution of slavery, it expresses Congress’s recognition of one of the most notorious wrongs to have ever taken place in one of its 19 rooms,” the bill read.

The 1857 Dred Scott decision held that the Constitution did not extend citizenship rights to Black Americans of African descent and inflamed public opinion in the northern states in the years before the Civil War.

The Senate passed the bill last week by unanimous consent. It now heads to President Biden’s desk for signature.

It was initially introduced by House Majority Leader Steny Hoyer and Rep. David Trone, both Maryland Democrats, in 2020.
The House passed the bill, but it did not receive enough support in the Senate.

Mr. Taney’s bust currently sits inside the entrance to the old Supreme Court chamber inside the Capitol building.

Lawmakers have acted in recent years to remove and replace memorials of historically flawed figures honored in the halls on Capitol Hill, denouncing them as symbols of the country’s racist past.

In 2020, a statue of Confederate general Robert E. Lee was removed from the Capitol during a year of heightened racial tension following the death of George Floyd while in police custody in Minneapolis.

House Speaker Nancy Pelosi also then ordered the removal of four portraits of Confederate House speakers from the Capitol.