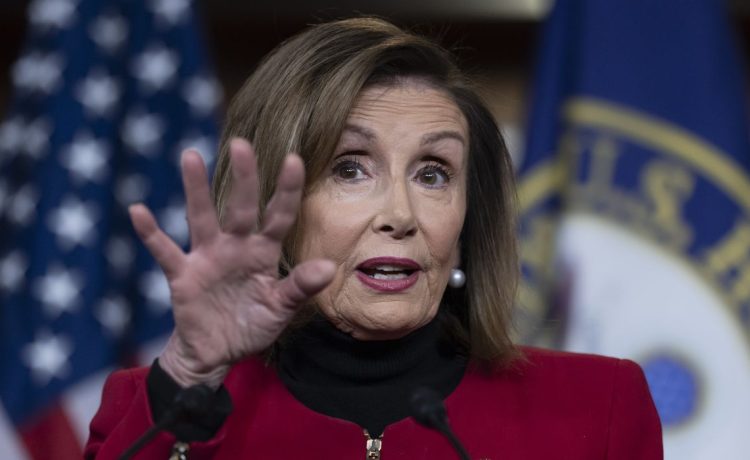 House Speaker Nancy Pelosi’s name will soon appear on a federal building in her hometown thanks to an item slipped into a massive must-pass spending bill that Congress is rushing to approve this week.

Tucked away on page 610 of the 1,455-page tome is a provision to rename the federal building located at 90 7th St in San Francisco, California, as “Speaker Nancy Pelosi Federal Building” to honor the California Democrat who is stepping down from her longtime leadership post.

The building is home to one of Mrs. Pelosi’s district offices and several satellite locations for federal agencies.

Republicans said Mrs. Pelosi’s “monument to me” is just one example of wasted taxpayer money and government resources in the year-end $1.7 trillion package being rushed through Congress.

Critics say lawmakers can’t know the contents of the massive bill that they are expected to vote for within days of receiving it.

The legislation also pays homage to Senate Appropriations Committee Chair Patrick Leahy, Vermont Democrat, and ranking member Richard Shelby, Alabama Republican. Both men are retiring at the end of this year after decades in Congress.

Mr. Leahy will get a school lunch program and a lake named after him, in addition to $30 million going to the Patrick Leahy Bullet-Proof Vest Partnership Grant Program.

The FBI training center in Redstone Arsenal, Alabama, will be renamed the “Richard Shelby Center for Innovation and Advanced Training.”

Among the thousands of individual funding items or earmarks worth nearly $10 billion filed by Democrats and Republicans to benefit their states or districts is one to create a $3.6 million “Michelle Obama Trail” in Georgia. The project, named after the former first lady, was filed by Rep. Hank Johnson, Georgia Democrat.

The spending bill creates a “Ukrainian Independence Park” in Washington that was spearheaded by GOP Reps. Victoria Spartz of Indiana, who is Ukrainian, and Brian Fitzpatrick of Georgia.

“The Democrats’ reckless omnibus bill spends YOUR money on a ‘Michelle Obama Trail,’ a ‘Ukraine Independence Park’ in DC, and a ‘Speaker Pelosi Federal Building’ in San Francisco,” tweeted Rep. Andy Biggs, Arizona Republican. “Are you ok with all of this?”