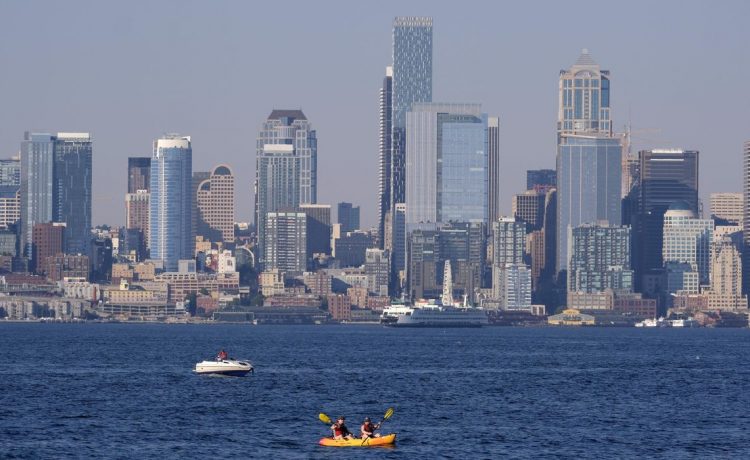 SEATTLE — Progressive champion Rep. Pramila Jayapal wants congressional Democrats to pursue an equity-based economic agenda modeled after her home city of Seattle, which has spearheaded liberal laws such as the highest minimum wage in the nation.

It’s a left-wing agenda that encounters plenty of skepticism, including from more moderate members of her Democratic Party.

To make her case, Ms. Jayapal brought the House Select Committee on Economic Disparity and Fairness in Growth to Seattle this week to showcase her hometown as a progressive success story.

“There’s this idea that we’ve passed these crazy ideas and somehow the economy is tanking and that’s not the case,” Ms. Jayapal said. “We have a really thriving economy and I think there’s a lot of people who don’t understand how our progressive policies here have really led the nation, led the state, and how we have continued to thrive.”

The visit highlighted the priorities of the Congressional Progressive Caucus, which is the largest ideological and most left-leaning faction of House Democrats and is chaired by Ms. Jayapal.

Seattle’s laws read like a liberal wishlist that Democrats have been unable to achieve on the national stage:

• The city’s Paid Parental Leave Policy guarantees four weeks of paid leave for the birth, adoption, or foster placement of a new child or children.

• A Paid Sick and Safe Time (PSST) Ordinance requires employers to provide employees in the city with paid time off to care for themselves or family members for physical or mental ailments, including to go to the doctor or when a school or place of care is closed.

• The highest minimum wage in the U.S. at $17.27 per hour for most workers in the city including workers at businesses such as McDonald’s, Target and Starbucks. It includes workers at any chain store with more than 500 workers globally or less than 500 workers if workers do not get tips or healthcare benefits.

Earlier this year, Seattle also became the first city to set a minimum wage standard for gig workers, like app-based delivery drivers. The city’s “Pay Up” bill will set the minimum wage for these workers to $17.27 an hour starting in 2023.

Doubts about Ms. Jayapal’s agenda started with her Democratic colleagues who took the junket with her to Seattle.

“Is this replicable if you don’t have a major research university and two monster multinationals?” said Rep. Jim Himes, a Connecticut Democrat who chairs the select committee.

He was referring to the University of Washington Seattle and Microsoft and Starbucks, which have headquarters in the Seattle metropolitan area.

“What works in Seattle might now work everywhere else. I’m not sure what works in Seattle would work in Bridgeport,” Mr. Himes said. “Parts of it, maybe, like making progress for gig workers. That may work in more places rather than raising the minimum wage to $15 which may actually be disruptive in a very low-wage jurisdiction.”

Ms. Jayapal also brought along Reps. Gwen Moore of Wisconsin and Marcy Kaptur of Ohio, in hopes of persuading colleagues from the more conservative midwest to embrace her bold priorities.

Seattle enjoys a vibrant economy. Last year, it ranked as the 10th largest regional economy in the country, surpassing the Atlanta metro area, according to the Bureau of Economic Analysis.

The city’s unemployment rate of 3.3% in June was a few ticks below the national rate of 3.8% and ranked 127th among metropolitan areas.

Studies on the city’s economic policies have shown mixed results in tackling the income inequality it was supposed to mitigate.

A 2021 study examined by the University of Washington’s School of Public Policy and Governance, which looked at the phase-in of a $13 minimum wage increase between 2014 to 2017, found a boost in pay but a reduction of hours worked for low-wage jobs. Those earning less than $19 an hour saw wages rise by 3.4%, but they suffered a 7% decrease in hours worked.

The rate at which low-wage workers were hired also decreased as wages rose, according to the report.

The city also struggles with crime and homelessness.

Rep. Bryan Steil, Wisconsin Republican and ranking member of the committee, said Seattle’s challenges with homelessness and crime are two examples of policy failures of the city.

“You don’t want a one-size fits all approach based on Seattle’s model,” he said. “The homeless situation is really significant and when you talk to folks who live here and work here, it is altering people’s daily lives and then the downtown people, the number of people who are homeless is incredibly significant.”

Seattle ranks as the 18th largest city in the U.S. but has the third largest homeless population. The city has at least 11,751 and a homelessness rate of 1.59%. Only much larger Los Angeles and New York had larger homeless populations, according to a 2021 study by the U.S. Department of Housing and Urban Development.

Among big cities, only Los Angeles had a higher homelessness rate at 1.63%.

There is also a crime problem in Seattle, though not as bad as some other cities caught up in the national crime wave.

Seattle received national attention in recent years for its political unrest in the wake of the 2020 murder of George Floyd, when the city was pressured by demonstrators to make drastic cuts to its police force, which has been linked to its rising crime rate.

The Seattle Police Department said the city reached a 14-year high in violent crime in its 2021 final crime report.

Rampant crime has also driven businesses out of the city and into the suburbs. From March 2020 to March 2021, more than 160 businesses closed or relocated from Seattle, most of whom cited violent crime concerns.

A survey, commissioned by the Seattle Metro Chamber of Commerce from March 13-20, found that 67% of the city’s residents considered moving out of Seattle due to overall quality of life concerns, public safety, and affordability issues.

Wendy, a Seattle native who only gave her first name, blamed ultra-progressive policies for the departure of residents and the rise in crime and business losses.

“The city is just so, so far left that they’ve just completely destroyed everything and the crime is so bad. I never go downtown like I used to do,” she said.

City and state officials pointed to other statistics that show the success of the city and state when it comes to creating a thriving business environment.

Last month, Forbes magazine declared Seattle among the top 10 cities that grew its gross domestic product. National Business Week ranked the city as the 7th best in the country for starting a small business.

Washington state as a whole was rated as having the best economy in the nation in a June report put out by the personal finance website WalletHub.