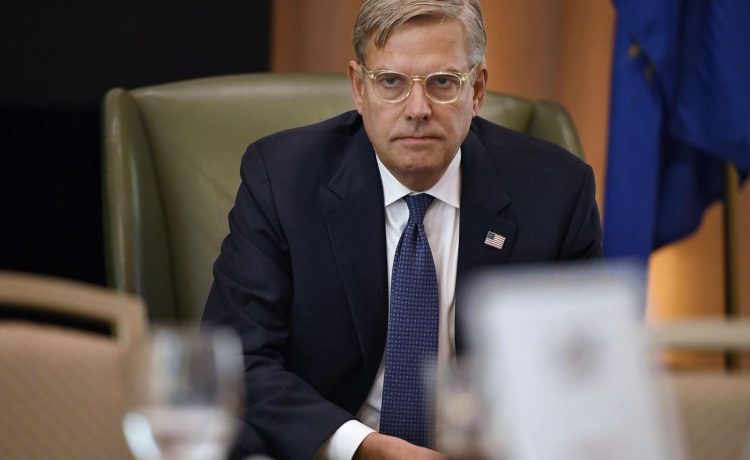 HARTFORD, Conn. — As part of his campaign to win over blue state voters, the Republican candidate for governor in Connecticut, Bob Stefanowski, is trying to capitalize on any lingering resentment over safety precautions taken at the height of the COVID-19 pandemic.

Last week, the businessman pledged to never mandate COVID-19 vaccines for schoolchildren, joining Republicans who made similar promises after a national panel advised the Centers for Disease Control and Prevention to add the shots to lists of recommended vaccinations for kids and adults.

Stefanowski has complained that the state’s old mask mandate in schools, which ended in most districts in late February after campuses were allowed to reopen for in-person learning with masks in August 2020, lasted too long. In his proposed “Parents’ Bill of Rights,” he says families shouldn’t be “forced by the government to vaccinate or mask their children without any recourse to object.”

“It’s up to the person. They should have the choice,” Stefanowski said.

Stefanowski’s opposition to mandatory COVID-19 vaccines for “public or private employees or anyone else” is in line with other Republicans who have campaigned this election season on promises to protect individual liberty in public health.

Even though COVID-19 is not the hot-button issue of two years ago, Republican contenders such as U.S. Rep. Lee Zeldin, who is running for governor in New York, and Adam Laxalt, a U.S. Senate candidate in Nevada, have also highlighted their opposition to mandatory COVID-19 vaccines.

“Children could be forced to take this vaccine in order to attend school,” Laxalt warned.

They’ve maintained that line of attack even as public safety measures aimed at preventing COVID-19 have largely fallen away.

Connecticut Gov. Ned Lamont, a Democrat, hasn’t proposed making COVID-19 vaccines mandatory for kids. There is no movement afoot to return to masking in schools.

Lamont’s executive orders requiring state employees, child care workers and school staff to get at least one COVID-19 vaccine shot have all expired.

Jake Lewis, Lamont’s campaign spokesman, accused Stefanowski of “courting and pandering to the extreme anti-vaccine movement to save his flailing campaign.” A recent Quinnipiac Poll shows Lamont is ahead by 15 percentage points. Stefanowski has said other polling shows the race is much tighter.

In a recent interview with The Associated Press, Lamont defended the COVID-19 mitigation steps that his administration took during the pandemic, saying he “had to make the call” and couldn’t have reopened schools unless teachers felt safe with the mask and vaccination mandates that were put in place.

“Remember, in 2020, there was no dispute about any of this stuff. Nobody was arguing about masks or testing or vaccination. We were really united because we were confronted with an enemy that we couldn’t see,” he said. “It was only a year or so later that you started having a little bit of pushback. Maybe they wanted the bars open sooner. ‘I’m going to open my bar, to hell with you,’ that type of thing.”

It’s questionable whether attacking pandemic safety measures is a winning strategy in Connecticut, a state that was hit hard early in the pandemic, and where vaccines have largely been embraced.

COVID-19 mandates didn’t appear among Connecticut voters’ top issues, according to a recent survey by the Quinnipiac Poll.

But Stefanowski’s pledge not to impose COVID-19 vaccine mandates has been cheered by some, including those who opposed a law Lamont signed last year that took away a religious exemption from childhood immunization requirements for schools, colleges and day care facilities. Vaccines required in Connecticut schools depend on the child’s grade. They include polio, measles, mumps and rubella.

Stefanowski has also received plenty of criticism for his public pledge, especially on social media where people have accused him of being misleading about the safety of vaccines and kowtowing to vaccine opponents.

Others have credited Lamont for doing the right thing during the pandemic, saying the vaccine and mask mandates kept the state running.

Stefanowski himself says he is fully vaccinated, and he personally gave away more than 1.6 million masks during the height of the pandemic.

Yet he’s used vaccine resistance to generate campaign contributions. In one appeal, he said he was “being censured by Facebook” for trying to spread the message about his stance against mandates. A campaign spokesperson said supporters who tried to share the message received an automatic warning from Facebook about Stefanowski’s post possibly being misleading about vaccines.

“As governor, I would NEVER force a COVID vaccine mandate on our children or anyone else. But that has gotten me a lot of pushback, and now my platform is being silenced!” the fundraising appeal says.