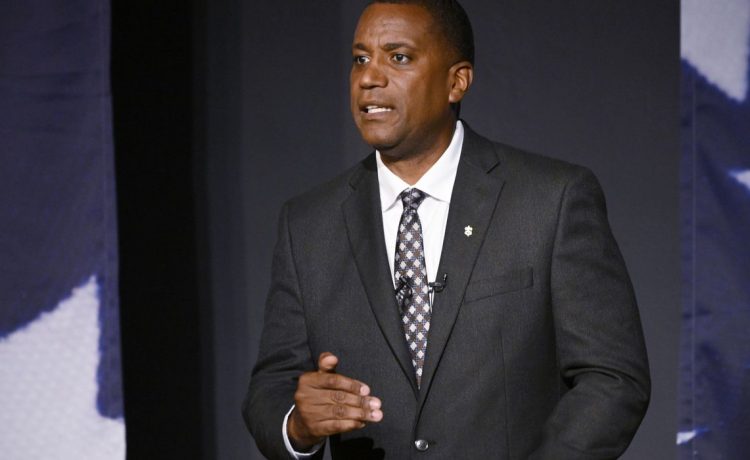 HARTFORD, Conn. — Republicans see an opportunity this year to flip a U.S. House seat in blue Connecticut, banking on a candidate who insists he doesn’t fit the mold of many GOP contenders this year who are publicly loyal to former President Donald Trump and the party’s conservative agenda.

George Logan, a former state senator and mechanical engineer, has pitched a message that he isn’t a “typical Republican” in his race against U.S. Rep. Jahana Hayes, a Democrat seeking a third term. In one of his TV ads, he’s seen standing next to a box with those exact words scrawled across it.

“They’re only coming after me now because I won’t fit in this box,” he says.

By some measures, Logan is right. He’s a rare Republican in favor of abortion rights. In the state Senate, he voted with the Democrats some of the time, including on bills to amend firearms storage regulations and expand absentee voting. He’s also Black, still a relative rarity for a candidate in a party that draws a majority of its support from white America.

But Democrats argue Logan can’t be trusted to be the social moderate he claims to be, especially if he gets to Washington, where one of the priorities of the House Republicans’ midterm election agenda is to “protect the lives of unborn children and their mothers.”

“If anyone in this room thinks that the Congressional Leadership Fund is putting millions of dollars into the campaign of someone that they can’t trust will vote for the things that they would like, then you are all sadly mistaken,” Hayes said during a recent debate.

Logan said he will ”not blindly follow any leadership, Republican or Democrat, in Washington.”

The race between Hayes and Logan is one of several in blue states that have been surprisingly competitive this year.

Outside organizations have so far spent more than $7 million on the race in the district, which covers northwestern Connecticut and a chunk of the state’s center. If Logan unseats Hayes, he would be the first Republican to represent Connecticut in Congress since U.S. Rep. Chris Shays lost a reelection bid in 2008.

The race marks the first time in Connecticut history that two Black candidates from major parties are running against one another for a U.S. House seat. Hayes is the first Black woman to represent the state in the U.S. House of Representatives.

Currently, there are only three Black Republicans in Congress, but Logan is one of 28 such candidates running this year, according to the National Republican Campaign Committee.

Like some other Republicans running in blue states, Logan has walked a cautious line on some issues: On gun control, he has said he’s open to some regulation but is “very, very hesitant” to back legislation that would infringe on Second Amendment rights. Asked whether he subscribes to the unsubstantiated claims that Trump was cheated out of an election win in 2020, he usually says he isn’t interested in revisiting the issue, though he does believe that Joe Biden “is the president.” As for Trump, he hasn’t said whether he’d support him if he runs for president again in 2024.

Despite both candidates being Black, there have been accusations of racism lodged by Connecticut Republicans and Logan, whose parents are of Jamaican descent.

Logan took issue with a tweet sent by the state Democratic Party in May that he claims likened him to the fictional monkey in the Curious George children’s books. The tweet employed the phrase “This is George,” the opening line of the classic book, and included a photo of Logan looking quizzical. He has since referred to it in a TV ad and recently during an interview with Fox News host Tucker Carlson.

“The Democrat leadership, they’re throwing everything at us,” Logan told Carlson. “They’re even using racist tactics.”

Connecticut Democratic Party officials strongly denied the accusation, saying the tweet had been misinterpreted, but ultimately apologized and removed it.

Hayes said in May that she didn’t see any racial overtones to the tweet but understood Logan’s perception and apologized. Earlier this month, Hayes criticized her opponent for still bringing it up.

“When you don’t have any issues, those are the types of things you talk about,” she said. “I have three Black sons. I am not going to be party to a conversation that diminishes Black men. I’ve never done it. I’m not going to do it, because once you give permission for that to happen, you’ve opened the door for it to happen.”

In addition to targeting Hayes, national Republicans have also put resources into trying to unseat U.S. Rep. Joe Courtney, the Democrat who has represented part of eastern Connecticut since 2006. He’s being challenged by Republican state Rep. Mike France, a retired U.S. Navy officer and chair of the General Assembly’s conservative caucus.