The Great Days > News > Conservatives balk at $1.7 trillion spending deal but McConnell says it’s as good as it gets
News

Conservatives balk at $1.7 trillion spending deal but McConnell says it’s as good as it gets 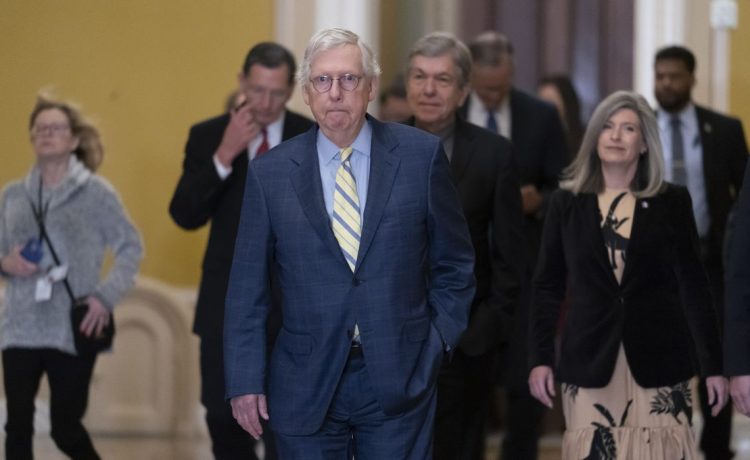 Senate Republicans touted a string of victories including slashing the IRS budget and boosting military spending when a $1.7 trillion federal spending bill was unveiled Tuesday and they scored those wins despite Democrats controlling both chambers of Congress.

It’s the last spending bill from a Democrat-run Congress for at least two years since Republicans will take over the house in January. But that is also the reason House Republicans were less than celebratory about the behemoth package, saying Senate Republicans should have helped push the spending deal into next year to put more of a GOP stamp on the budget.

Still, Senate Republican leaders who brokered the spending deal to avoid a government shutdown on Friday said there is a lot for conservatives to cheer in the package. For instance, the $858 billion in defense spending outpaced the $773 in domestic non-defense money, breaking a longstanding Democratic demand for parity between the two tranches.

The legislation also banned the Chinese-owned social media app TikTok from U.S. government phones over national security concerns and repealed the military’s COVID-19 vaccine mandate, both measures that were spearheaded by Republicans.

Lawmakers are clambering to ram the package through by a Friday night government shutdown deadline.

“We can pass this bill, give our service members and commanders the resources they need, flip the president’s broken budget request on its head and actually cut baseline, nondefense spending,” said Senate Minority Leader Mitch McConnell, Kentucky Republican. “Or, we can fail to pass the bill and give our armed forces uncertainty while the Chinese communist party continues to pour money into new research and more weapons.”

He added: “This is not a close call.”

House Republicans, meanwhile, warned of a political reckoning for any GOP senator who votes with Democrats to pass the 4,155-page spending plan.

“When I’m Speaker, their bills will be dead on arrival in the House if this nearly $2T monstrosity is allowed to move forward over our objections and the will of the American people,” House GOP leader Kevin McCarthy of California tweeted.

Mr. McCarthy joined the more conservative members of his conference in threatening Senate GOP “sellouts” as he struggles to cobble together enough support to become the next speaker.

The tough talk didn’t go over well with Republican senators, including at least one who plans to vote against the spending package.

“This is the chest pounding he has to do right now. I get it,” said Sen. Kevin Cramer, North Dakota Republican. “But if that’s going to be the position of House Republicans, they’ll only prove that the right thing to do was [exclude] them from this bill.”

Congress is poised to avoid the midnight Friday funding cliff, despite the abundance of hand-wringing in the upper chamber. It also is expected to pass despite opposition from a vocal — albeit small — chorus of conservative senators who call themselves the “Breakfast Club” and have the power to delay final passage until Friday, which won’t cause a partial government shutdown but would frustrate the holiday travel plans of their colleagues.

“When you ignite all 50 Democrats and sharply divide Republicans … I don’t understand how that’s a big win for Republicans, especially right after we just had an election and control of the House has now shifted,” said Breakfast Club member Sen. Mike Lee, Utah Republican. He said congressional leaders “deliberately contrived this shutdown threat. They are extorting us and the American people.”

All 100 senators must agree to fast-track the bill to passage before funding runs out and winter storms barrel through much of the country and hit Washington at week’s end.

Republicans who are opposed, such as Mr. Lee, are expected to receive votes on amendments in exchange for not blocking swift passage.

Significant provisions of the legislation include:

• Nearly $10 billion for thousands of projects for Democrats and Republicans in their home districts through a process called earmarks.

• A GOP-pressed repeal of the military’s COVID-19 vaccine mandate.

• The bipartisan Electoral Count Act that seeks to prevent a repeat of last year’s Jan. 6 attack on the U.S. Capitol by reforming how presidential elections are certified by Congress.

• A ban on the popular social media app TikTok on government devices over its connections to China, a move spearheaded by GOP Sen. Josh Hawley of Missouri over national security concerns.

The bill also doles out $45 billion in military and humanitarian aid for Ukraine and $40 billion in disaster relief for states.

Spending items left out of the package include permanent residency protections for 70,000 Afghan refugees who could face deportation, Democratic Sen. Joe Manchin III of West Virginia’s bill to overhaul federal permitting for energy projects and a bipartisan measure to remove federal prohibitions that block legal marijuana companies from accessing the banking system.

The spending package also kicks the can down the road regarding a long-running feud among Democrats in the Washington region over whether the new FBI headquarters should be in Virginia or Maryland.

Democrats ultimately settled on compromise language that said the General Services Administration must meet with both states in the coming months and offer fair consideration to both, further punting the issue. 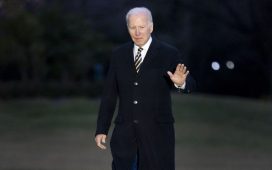