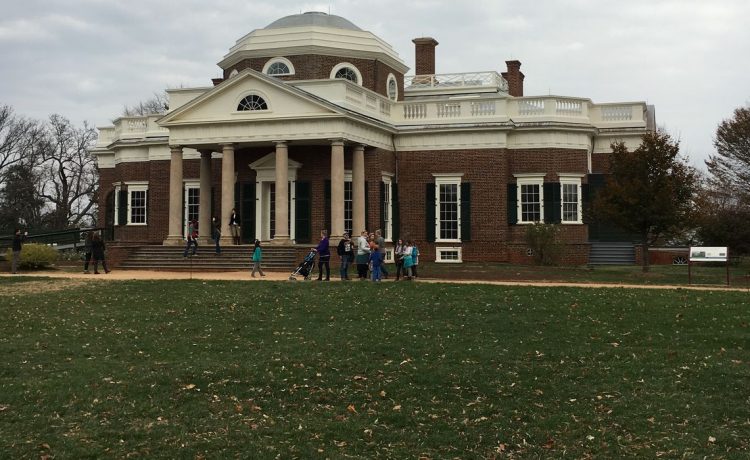 There’s plenty about slavery at the historical homes of James Madison and Thomas Jefferson, but not so much about their monumental legacies as Founding Fathers, according to a newly released report.

The analysis by the Heritage Foundation contrasts Mount Vernon’s “balanced portrayal” of slavery and George Washington’s career with Monticello’s lack of any exhibits dedicated to Jefferson’s legacy beyond fathering children with his slave Sally Hemings.

The conservative think tank says Montpelier devotes even more time to Madison’s role as a slave owner, labels the Constitution a racist document and neglects his role in forming the United States.

Heritage President Kevin Roberts, an academic historian of the early American slave trade, says Monticello and Montpelier are doing more than “redressing past oversights about the lives of the enslaved.”

“I’ve assisted many historic house museums in improving their interpretation by bringing to life the enslaved people who lived and toiled on their property,” Mr. Roberts, a former president of Wyoming Catholic College, said in an email. “But Monticello and Montpelier have gone beyond that by virtually erasing their very owners. That isn’t correcting the historical record — it’s replacing it with a hyper-politicized, racialist agenda.”

The report, “A Tale of Three Presidential Houses: The Good, the Bad, and the Ugly,” has met with pushback from the Montpelier and Monticello officials, who insist their presentations are balanced.

“At Monticello, we are proud of our work to explain and honor the legacy of Thomas Jefferson and his foundational impact on our country and democracy,” a Monticello spokesman said in an email. “We also think it’s important to be honest about all the human beings who lived at Monticello and to recognize their contributions.”

DNA testing in 1998 found that an unidentified male member of the Jefferson family fathered Eston Hemings. In 2000, Monticello’s Thomas Jefferson Foundation issued a statement noting the former president may have done so with Sally Hemings.

Since then, Monticello has increasingly affirmed the alleged relationship, unveiling a Life of Sally Hemings exhibit in 2018 that presents Jefferson as the father of four Hemings children.

“The Heritage Foundation’s report is full of falsehoods intended to advance a supremacist ideology.  The tours and exhibits they now criticize were actually developed while a prominent former Heritage Foundation fellow served on the Montpelier board and was subsequently elected as chair,” the Montpelier statement reads. “The only thing that has changed is that our current board chair and the majority of our board members are now Black.”

The statement adds: “During the Heritage Foundation’s presentation of the report, Montpelier’s Black leaders’ purported perspectives were called ‘alien’ and ‘foreign.’ That tactic of making Black people the ‘frightening other’ is historically common for those too fragile to accept the telling of full history.”

The report notes that the Montpelier Foundation board of directors voted in March to add 11 new members from the Montpelier Descendants Committee. Only one of the new board members descends from someone enslaved at Montpelier.

According to Heritage senior policy analyst Brenda Hafera, the report’s author, this takeover of Montpelier’s board followed the 2017 debut of the estate’s “Mere Distinction of Colour” exhibits. While these exhibits highlight slavery and racism, she says Madison’s life only comes up during the house tour and a brief video in the visitor’s center.

In an email, Ms. Hafera criticized Montpelier for “instinctively resorting to the left’s talking point” that criticism of racial politics “is somehow proof of white supremacy.”

“Such an extreme response only draws more attention to the fact that the foundation is desperate to cover up their radical, anti-American history policies,” Ms. Hafera said.

Her report asserts that Mount Vernon offers reconstructed slave quarters, a house tour that mentions slavery and a memorial to the enslaved — but also presents Washington’s opposition to slavery and decision to free his slaves when he died.

Matt Briney, vice president of media and communications at George Washington’s Mount Vernon, said he would not comment on the report’s interpretation of Montpelier and Monticello.

“I do think it very fairly represents Mount Vernon in that we have incorporated the story of slavery without losing sight of Washington’s service to country and the founding of the nation,” Mr. Briney said.

Some historians defended the increased focus on slavery at the presidential homes.

“It is not possible to exaggerate the importance of ideas about race and the dynamics of human slavery in trying to understand the world views of Jefferson, Madison and Washington,” said James Grossman, executive director of the American Historical Association.

But constitutional historian Kevin R.C. Gutzman, an author of biographies on Madison and Jefferson, warned against minimizing the progress of the three presidents in eliminating slavery.

The Western Connecticut State University professor added that Washington — who took longer to progress “from happy slave owner to opponent of the institution” — ultimately accepted Black men into the Army and freed his slaves in his will.

“I think any account of these men that omits that they were born into a society in which no one questioned slavery’s morality — and that they all came to attack it in ways that played strong roles in persuading Americans it was wrong — is inadequate,” Mr. Gutzman said.