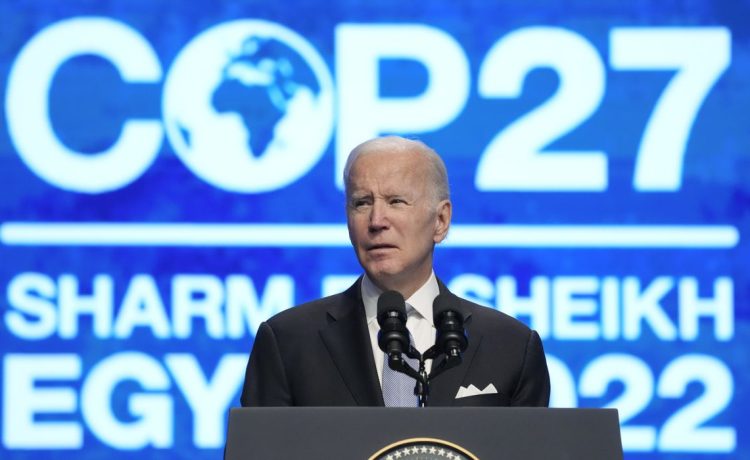 President Biden told a U.N. global summit on climate on Friday that the U.S. is committed to reducing its emissions and leading the fight against mass flooding, droughts and other climate catastrophes around the world as he confronts a political shakeup at home that will complicate his green agenda and pledges.

Speaking to the COP27 in Egypt, Mr. Biden vowed the U.S. will meet its target of a 50% reduction in emissions by 2030 compared to 2005 levels. He said the U.S. is committed to the Kigali Amendment to reduce the production of hydrofluorocarbons and boasted that suppliers to the federal government must disclose their emissions and climate risks.

“The United States government is putting our money where our mouth is to strengthen accountability for climate risk and resilience,” Mr. Biden told the crowd in the Red Sea resort town of Sharm el-Sheikh.

Mr. Biden said the U.S. will commit $100 million to the Adaption Fund — up from $50 million — to finance projects that help developing nations grapple with climate change. He also announced $150 million in financial support for African nations that want to expand early-warning systems and adapt their infrastructure to deal with climate change, while helping these nations tap into climate-related financing streams.

Mr. Biden characterized his administration as a course correction after the Trump administration put climate change on the back burner and pulled out of the Paris climate accords.

“I apologize we ever pulled out the agreement,” Mr. Biden said.

He also hailed young people for leading the charge in holding global leaders accountable for their climate policies.

“It includes less than I asked for but a significant amount,” Mr. Biden said.

Yet he addressed delegates at a time of change at home. Republicans are poised to retake the House, meaning the administration will have a hard time seeking new funding or pursuing green initiatives.

The shakeup means Mr. Biden might be unable to meet his pledge of $11 billion to fight climate change in nations that emit fewer greenhouse gases but are hard-hit by warming and other climate issues. Democrats could attempt to fund the pledge in an upcoming spending bill before the new Congress is assembled.

Republicans are urging Mr. Biden to balance his climate aims with robust production of oil and gas on American soil. They say U.S. consumers are facing high costs because he refuses to unleash domestic production while Mr. Biden largely blames Russian President Vladimir Putin for shocks as the pump.

Mr. Biden said the Russian invasion of Ukraine has increased volatility in the energy markets so it is important to “double down” on climate investments.

“Against this backdrop, it’s more urgent than ever that we double down on our climate commitments. Russia’s war only enhances the urgency of the need to transition the world off of its dependency on fossil fuels,” Mr. Biden said.

The president warned about the particular dangers of methane to the climate and the need to preserve and protect critical forests.
COP27 is a summit of nearly 200 nations that agreed to the U.N. Framework Convention on Climate Change, which was adopted in 1992. This year’s edition is being hosted by Egyptian President Abdel-Fattah el-Sissi.

Mr. Biden said the next decade will be pivotal, given the ravages of climate disasters that are unfolding now.

“The past eight years have been the warmest on record. In the United States, we’re seeing historic drought and wildfires in the West, devastating hurricanes and storms in the East,” Mr. Biden said.

He said Africa is home to many nations considered most vulnerable to climate change, pointing to food insecurity following droughts, climate-driven disputes among herding communities and massive flooding in Nigeria.

Mr. Biden was the only leader from the world’s largest carbon-emitting nations to attend the summit since China’s Xi Jinping and India’s Narendra Modi were not there.

“The United States is acting. Everyone has to act,” Mr. Biden said. “It’s a duty and responsibility of global leadership.”

He said wealthier countries that are able to finance coal projects in developing nations should be able to finance green initiatives, too.
House Speaker Nancy Pelosi led a congressional delegation to COP27 and was on hand for the remarks.