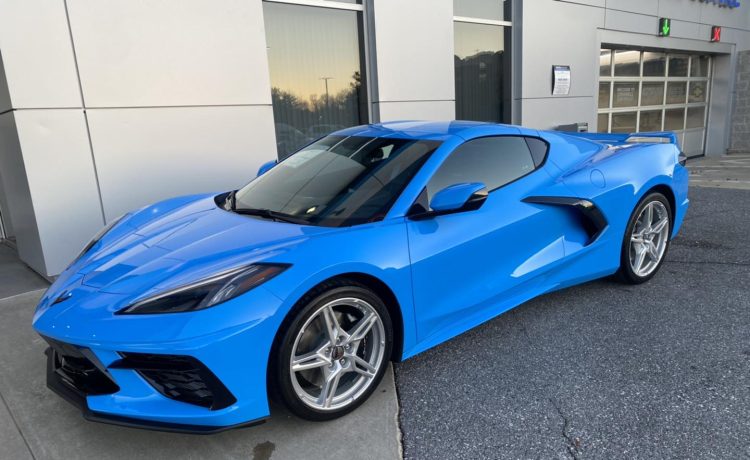 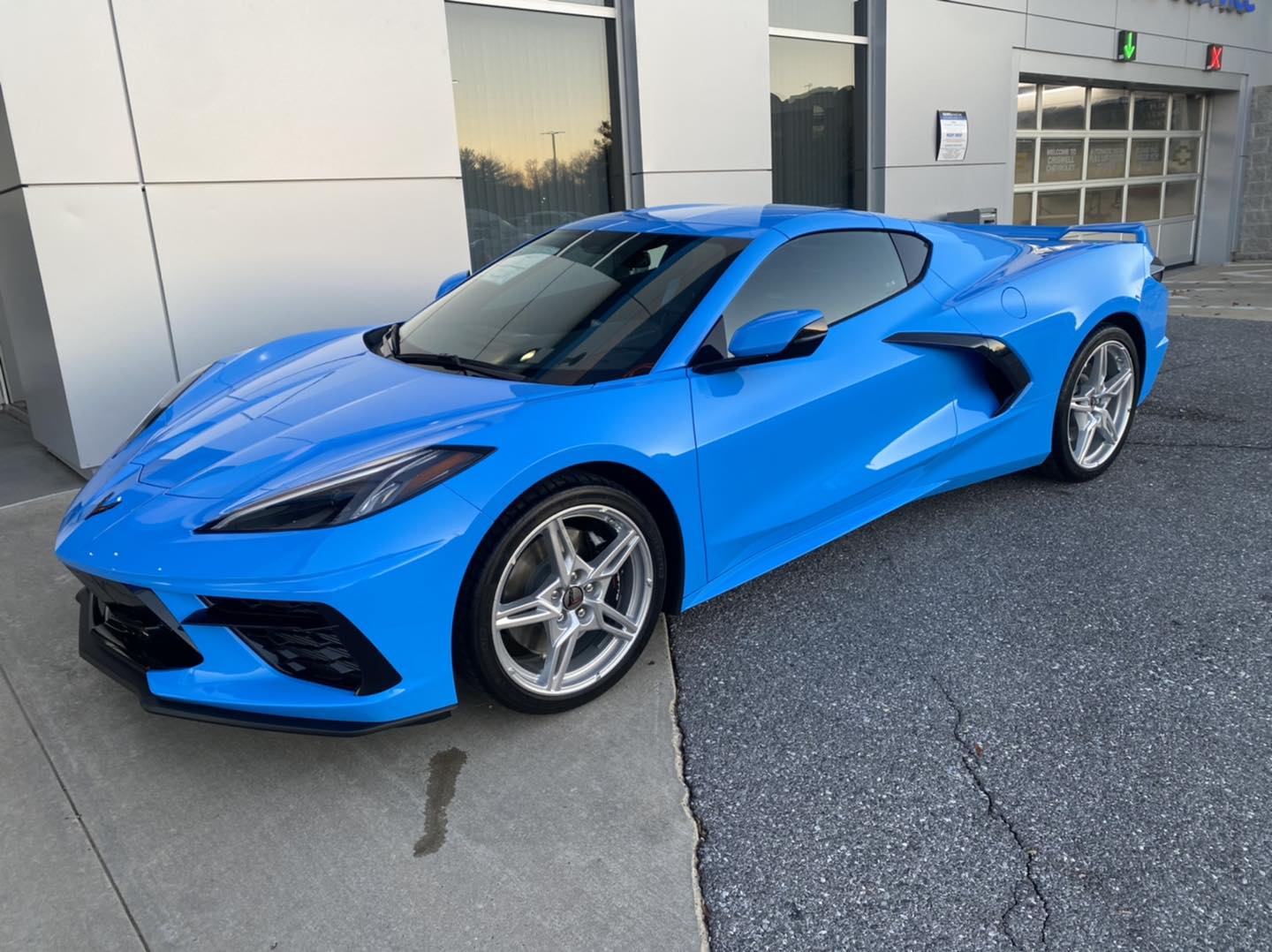 Criswell Chevrolet’s Mike Furman delivers new Corvettes to his customers who come from all across the country to work with the nation’s top individual Corvette seller.

Mike has some great new C8 deliveries this week to share, and his delivery options include picking up the car at Criswell in Maryland, picking up the car at your local Chevrolet dealership through a Courtesy Delivery, and the very popular R8C Museum Delivery. Mike can also ship the car directly to your driveway! How is that for convenience! We are always interested to see how each of these new Corvettes are spec’d by their owners, and we love to see those smiling faces after they are handed the keys. In addition to the deliveries, Mike has a great collection of throwback and vintage photos so let us know your favorites in the comments below.

You can see all Mike’s posts through the week on his CorvetteFurman Facebook Page.

~ 1958 Corvette “Fancy Free” Concept Car. In 1955, General Motors sent a recruiter to Pratt Institute in New York to hand-select a special group of designers for an initiative that Harley Earl, Vice President of Design, wished to advance. The designers were all women. The designer of this concept car was Ruth Glennie, a Pratt graduate who had had a fine art and industrial design and drafting background, having worked for a lighting manufacturer in Massachusetts. Ruth Glennie was assigned a Corvette to customise. Glennie’s design kept the standard Corvette form (the women were generally forbidden to redesign anything on the exterior), but painted it in a single tone, a silver-olive color. Glennie thought the Corvette might be a car one could customise for each season, and so she designed a set of three seat covers for each season that covered the standard olive-coloured leather. Seat belts, a hotly-debated issue at the time, were installed in Glennie’s Corvette, and, in an industry first, were retractable. When the doors were opened a flashing light blinked where a reflector might normally be placed. Glennie’s Corvette, a convertible, was named the ‘Fancy Free’, a name meant to evoke the freedom and joie de vivre of leisure travel (and to deflect attention from GM’s secret desires for high-powered Corvette racers). Today, the rare 1958 “Fancy Free” Corvette still exists and has become popular among automotive enthusiasts around the world. It has been restored and put on display at the Gilmore Car Museum in Hickory Corners, Michigan. Click here to read more about it here.

~ I have a business friend/Customer that always has a vendor spot at the Corvette Bash, John Brandt. John asked me if he could gift Kai a couple of chairs and I got John some pictures of his old 1966 Corvette. So John had them delivered to the Museum and last night and I assisted Kai in putting them in his company demo, which is a Silver Flare 2023 Corvette Z06 with Adrenaline Red dipped interior! Kai’s first view was last evening and he really thought they were cool. Great nighttime pics with the Museum in the background.

~Daryl B. of Eagle, Wisconsin ordered from me his new Rapid Blue 2023 Corvette Convertible with Natural dipped interior and this is one sharp combo! I had it drop shipped for courtesy delivery at his local Chevrolet dealership in Oconomowoc, Wisconsin and he just drove it home. He sent me this nice email:

“Thank You for your professional service and surprisingly fast response times. It was a pleasure working with you to help me achieve this personal milestone. This is my first sports car of any kind and the waiting list was only 55 years 9 months. My wife and I will share many fond memories with this car. I look forward to meeting you at Spring Mountain in April.“ 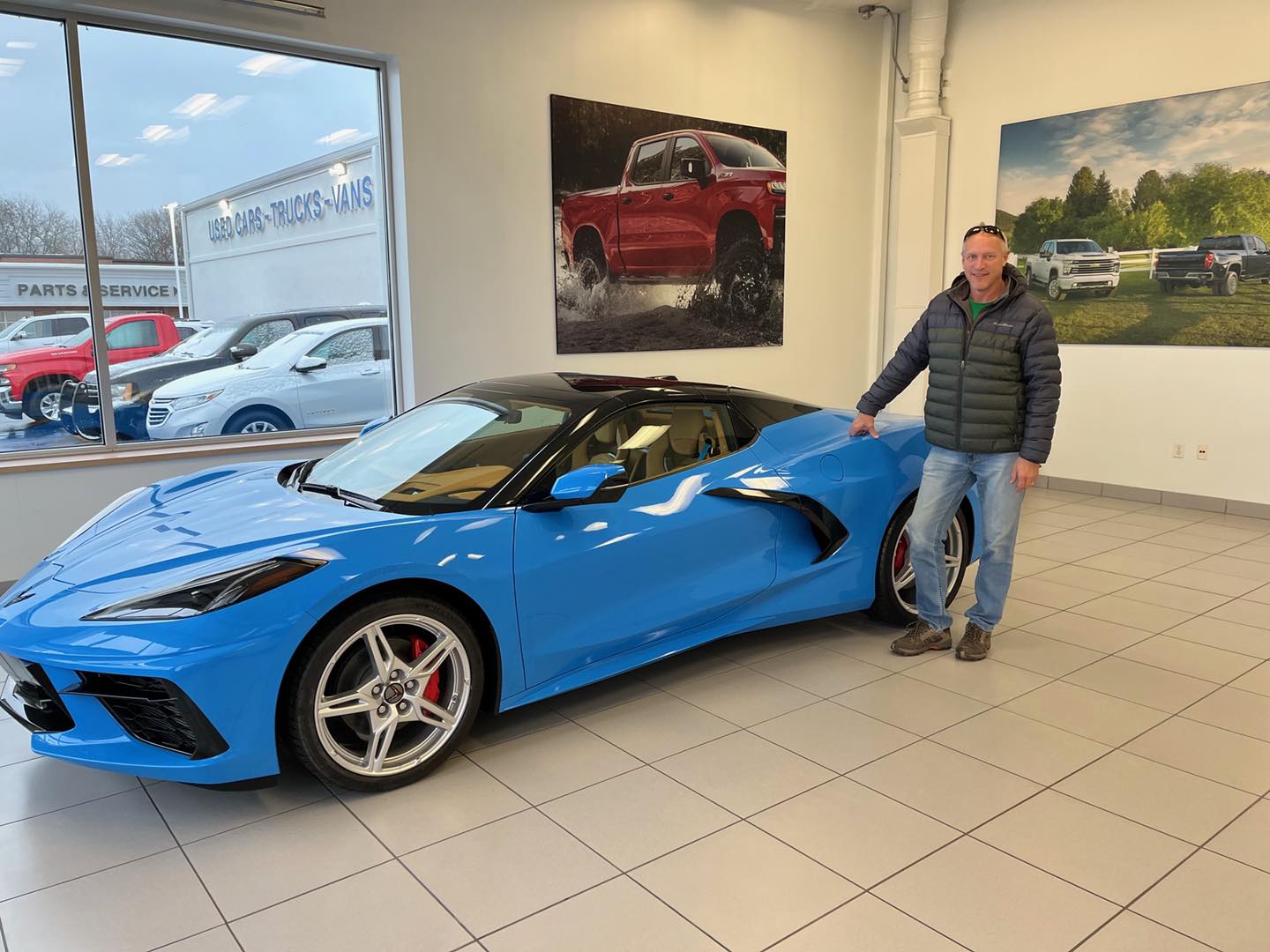 ~Gary S. of Peoria, Arizona placed his factory order with me and I had it drop shipped to his local Chevrolet dealer in Phoenix, AZ. Check out his new Red Mist 2023 Corvette Z51 coupe with Natural/black interior. Cool color combo! Another courtesy delivery to Phoenix. 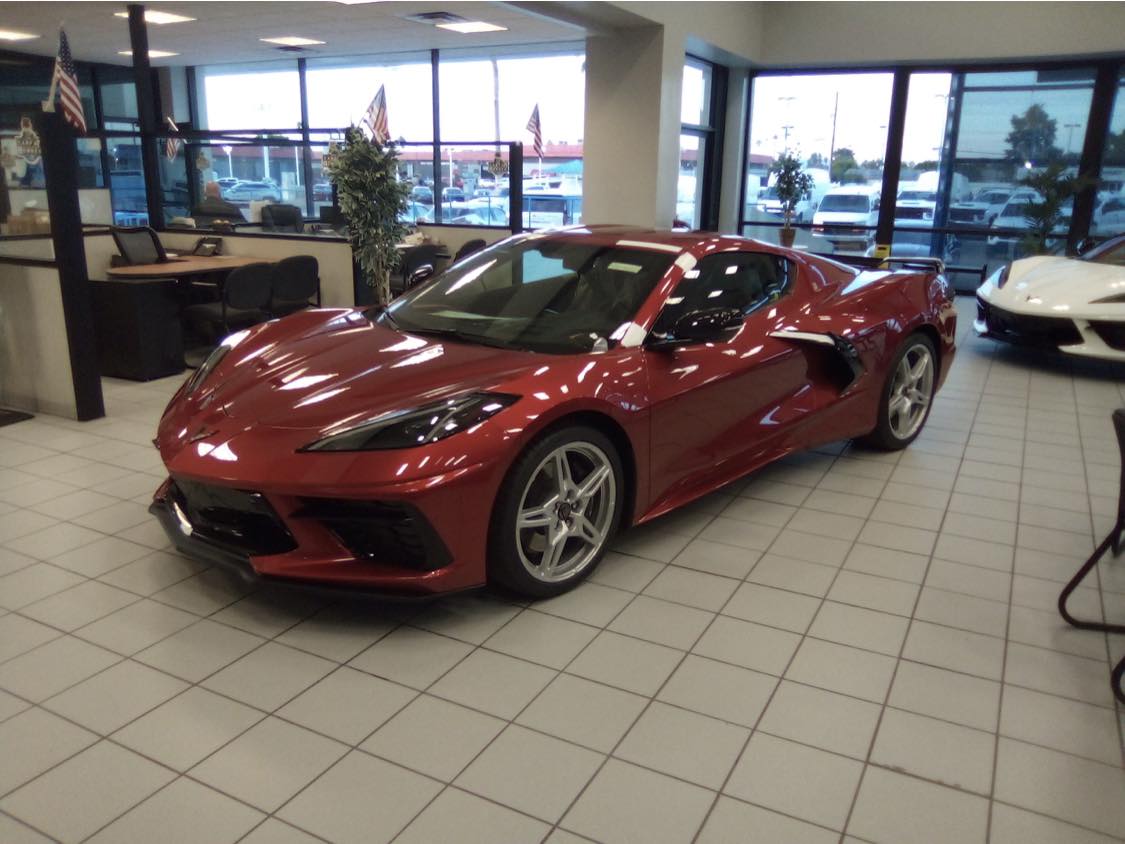 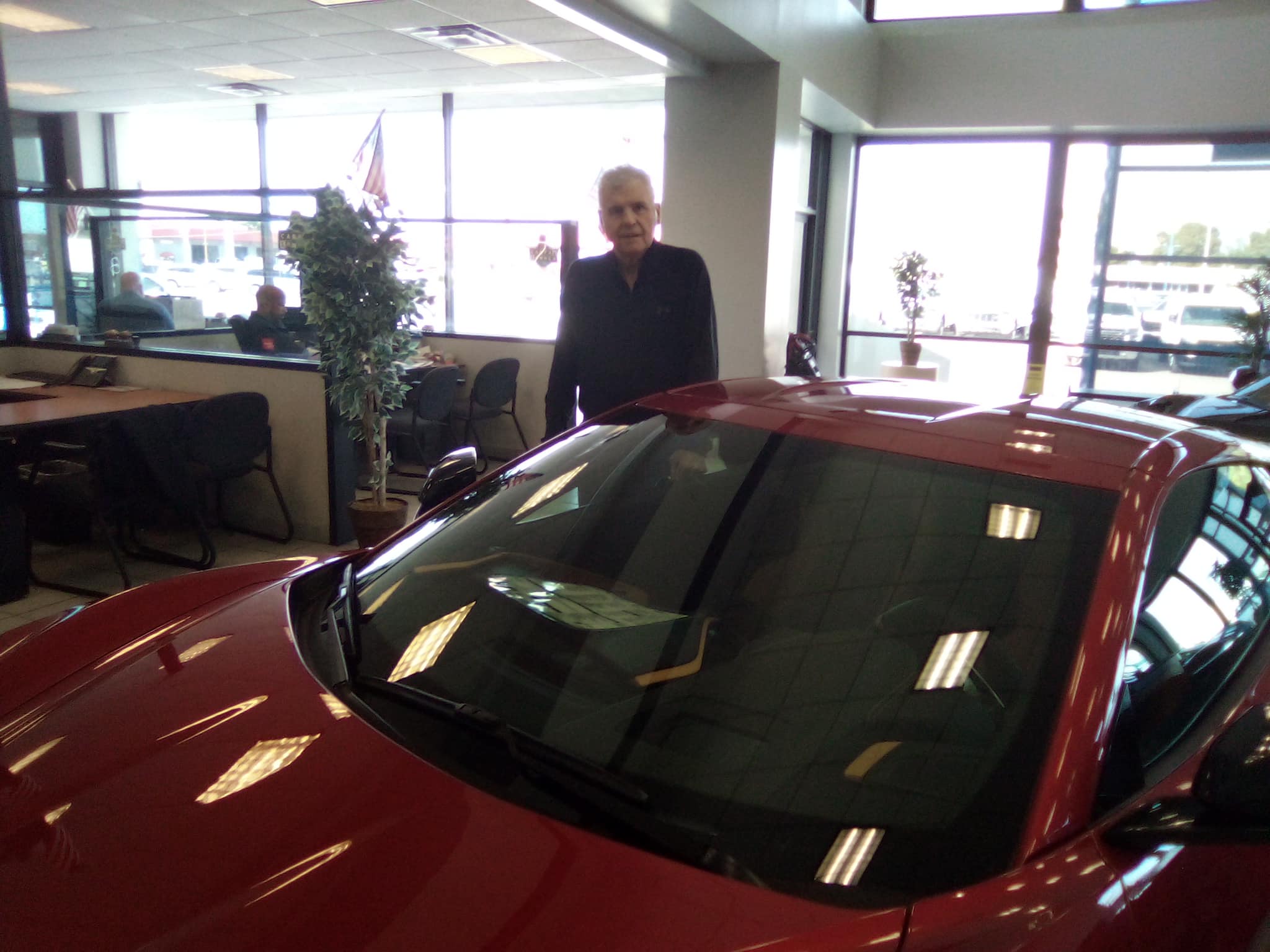 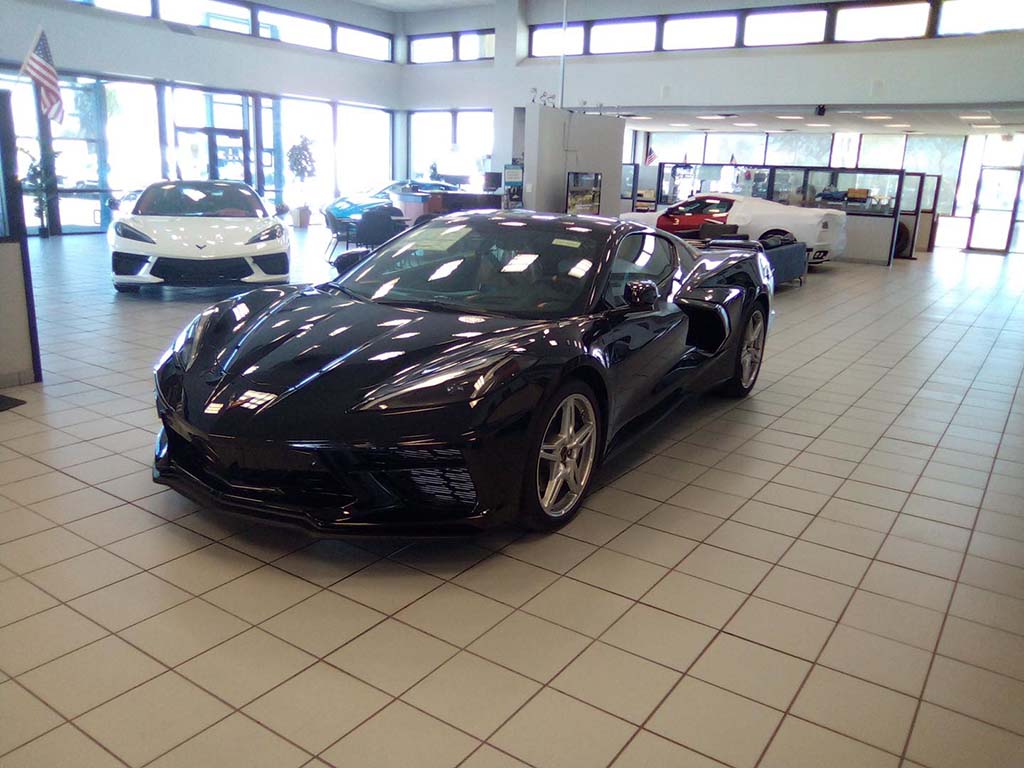 ~Alan H. of Rockville, Maryland factory ordered his Red Mist 2023 Corvette Z51 coupe with Natural interior and traded in his 2016 Corvette Z51 Convt. Perfect weather to take delivery of a mid engine Corvette and Alan was looking forward to his short ride home in his new pride and joy.

~Phil J. of Jacksonville, Florida ordered his Arctic White 2023 Corvette Convertible from me and yesterday took Delivery at the Corvette Museum in Bowling Green, KY. The red carpet was rolled out and they are well on their way down to Florida.

~Carl and Kathy S. of Seymour, Missouri factory ordered their new Silver Flare 2023 Corvette Z51 coupe with Black/Red R6X special interior and took delivery today at the Corvette Museum in Bowling Green, KY. Carl checked all the boxes and built his new Corvette exactly as he was seeking. Quick email from them s after getting home.

“The Museum Delivery was a Great Experience –Kathy & I along with our Guest CL and Mollie had a Ball. It was worth the 14 Month wait. Thank You for your Professionalism and Kindness during the process. I know I had a lot of calls and emails to you and you NEVER failed to answer and respond immediately. I know you deal with lots of folks including celebrities and such but I never felt like you slighted us at all. Even just stopping you at the Corvette Bash while you were walking by us. I had never met you but recognized you and stopped you and visited a very minutes. You made us feel just as important to you as anyone one else–not just a number–I remember you even asked my wife name again before you departed. I know you are busy but you always take the time for us. I sure hope we can do business again! I am on the list for Z06 but at my age who knows??? You are a Great Corvette Salesman but but also A Great Person. Mike have a Happy Thanksgiving— Don’t forget Branson MO or Corvette Weekend at Eureka Springs Arkansas First Weekend of October every year if you are ever in the area .”

~Ricky R. of Wellington, Florida really wanted a 70th Anniversary Corvette and today he took delivery of build #1372 of the 70th Anniversary special editions at the National Corvette Museum in Kentucky. Ricky’s new 2023 Convertible is a Pearl White Z51 and loaded with most every option!

~David J. of New Smyrna Beach, Florida just took delivery of his very first new Corvette! We have known each other nearly 20 years and the C8 was well worth the wait for David. I know, easier said than done. David chose Red Mist metallic for his 2023 Corvette coupe with Natural interior, 2LT pkg, body color accents, performance exhaust, low rear spoiler and spectra gray wheels. I had it drop shipped for courtesy delivery at his friends Chevrolet dealership in Avon Park, Florida.

~Dan M. of Orlando, Florida factory ordered from me an Arctic White 2023 CorvetteZ51 coupe and did the paperwork/payment process via Fed Ex. All cleaned up and ready for a truck headed South to his Florida home. Check out the Adrenaline Red dipped interior.

~Brandon K. of Lancaster, Pennsylvania decided it was time to order his first Corvette as he was enthused about the mid engine. Today he drove home to PA in his new Rapid Blue 2023 Corvette Z51 coupe. The tension blue seat belts look great with this combo.

~ Adam H. of Hainesport, New Jersey last owned a 1997 Corvette until today. Adam brought his son Jackson along for the big Corvette delivery day. Check out his new 2023 Corvette Z51 coupe in Elkhart Lake Blue with black interior. Jackson got the first start! Cool way to begin the day is to travel a bit over two hours down and then two hours back in a new C8 Corvette.

~Double Malibu day this morning. Clark K. Of Gaithersburg, MD is a Golfing friend of mine and he factory ordered two identical 2023 Malibu’s, one with Sunroof for him and one without for his son Chad. Both loaded and Black metallic paint. Clark was sitting in a Florida bar a couple years ago and started small talk with a Michigan Corvette customer of mine after a Golf round. Long story short they realized they both knew me and started texting me at 10pm of their Chance meeting. Small world for sure!

~ The Top 100 Corvette Barn find and throwback pictures with a tip of the cap to my old friend and Corvette customer Frank Class. May he Rest In Peace. Frank owned 50+ Corvettes in his lifetime and the last 5 he bought from me, each one was supposedly his last one.

Drive safely and enjoy the week.

Off Fridays and Sundays

“I sell and ship Nationwide and have done so for 45+ years!

Click on the link below for Cigar Aficionado magazine article that just came out: