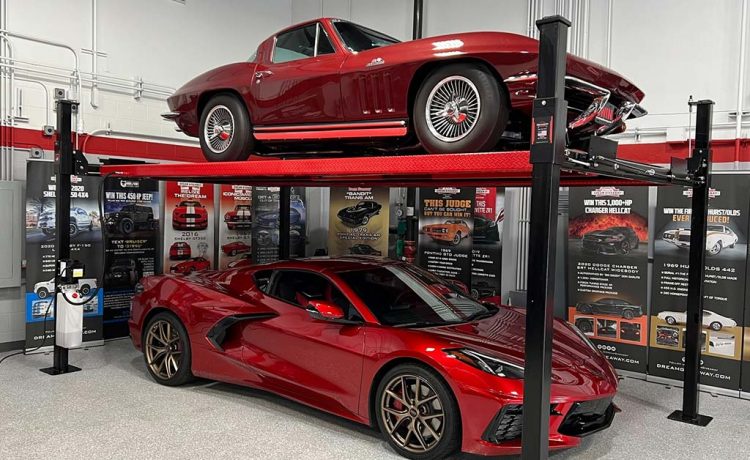 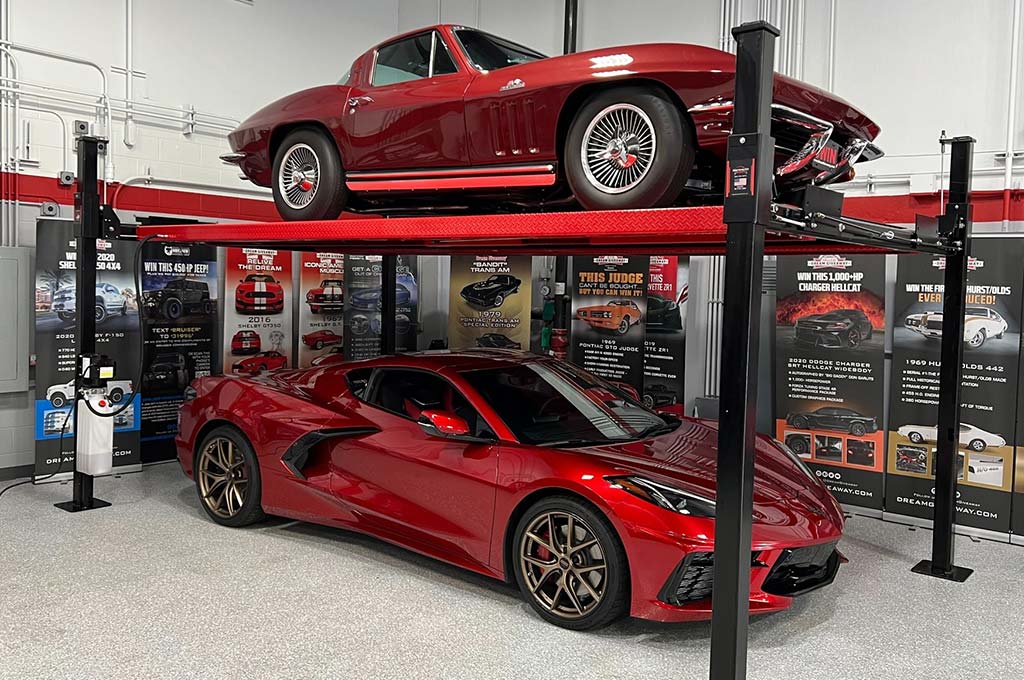 The Corvette Dream Givaway is offering automotive enthusiasts the ultimate garage makeover when you make a tax-deductible donation to help support several well-known children and veterans charities. One lucky winner will bring home a Red Mist 2022 Corvette Stingray and a Milano Maroon 1965 Corvette Sting Ray, as well as a four-post lift from Backyard Buddy and $45,000 to pay the taxes.

CorvetteBlogger readers will receive 50% MORE ENTRIES with your donations of $25 or more. You can see all the ticket packages here.

This nicely optioned 2022 Corvette Sting Ray Z51 Coupe is offered in Red Mist Metallic with an Adrenaline Red/Black interior. These Corvettes are always ordered with all the good stuff and the MSRP reflects that with a price of $87,615. 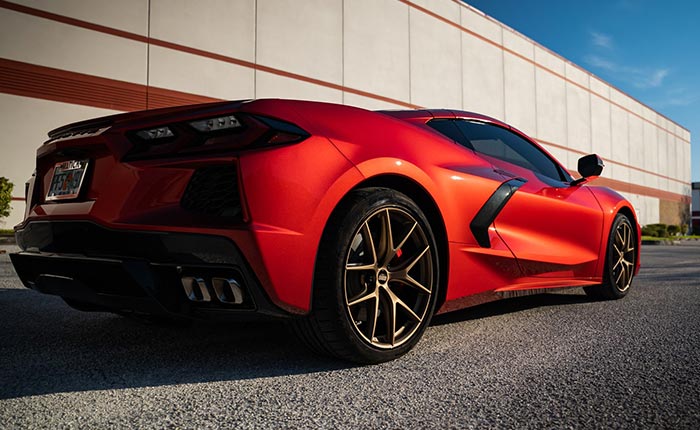 The Dream Giveaway decided to do a little departure from the previous cars by ordering a tastefully-optioned Z51 Coupe without a rear wing for a more streamlined, exotic appearance. You might even call it a sleeper after Lingenfelter Performance Engineering upgrades the 495-hp LT2 to 560-hp thanks to the LPE carbon fiber intake, specially tuned throttle body, and a performance exhaust from CORSA. The Corvette will also have a custom lowering kit, special graphics, and a custom wheel and tire package from BBS and Continental Tires. 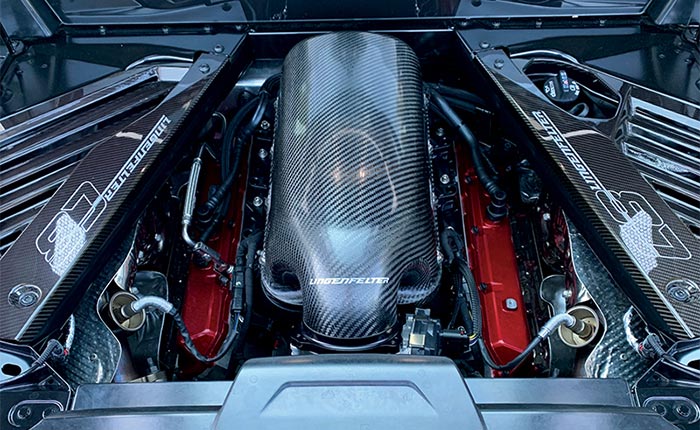 We know that collectors have been setting their sights for some time on the 1965 Corvette Sting Ray due to it being both the first year for disc brakes and the first factory big block engine in the form of the 396/425-hp V8. As the new engine was introduced well into the ’65 model year, only 2,157 Corvettes were produced with the L78 engine. 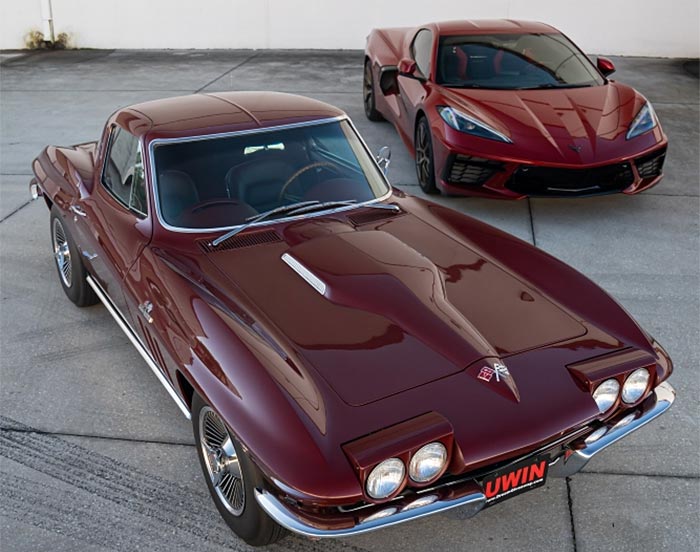 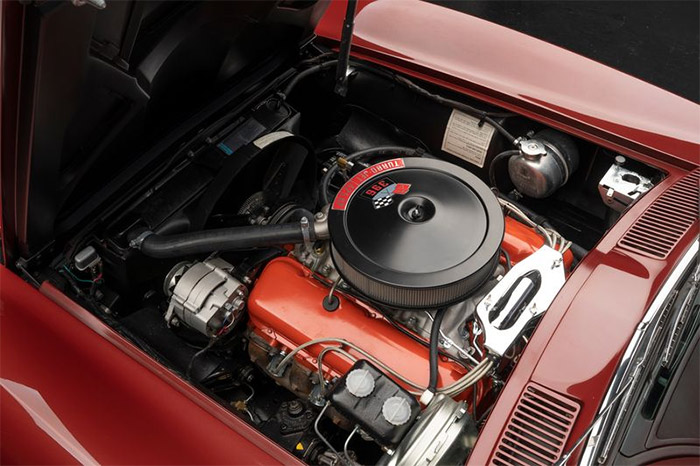 The ’65 Sting Ray Coupe underwent a body-off restoration and was repainted in the same DuPont paint code used by General Motors in 1965. The matching-numbers engine and transmission were both professionally rebuilt and tested before they were put back into the car while the rolling chassis was assembled to NCRS specifications. The original gauge cluster, clock, and radio were all restored and the chrome was triple-plated. For a 56-year-old classic, she looks brand new! 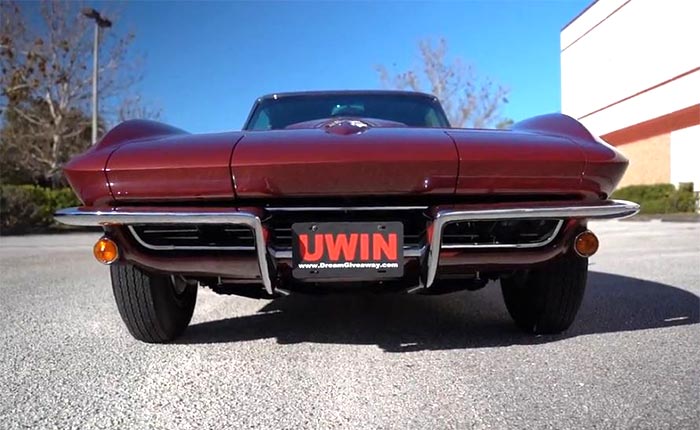 Dream Giveaway winners come from all walks of life, including policemen, factory workers, active and retired military servicemen, mailmen, medical professionals, and a whole lot more. Let it be your turn to win this amazing grand-prize package of a lifetime!

Make your donation today and CorvetteBlogger readers will get 50% MORE ENTRIES to win these fantastic Corvettes plus $40,000 for the taxes!