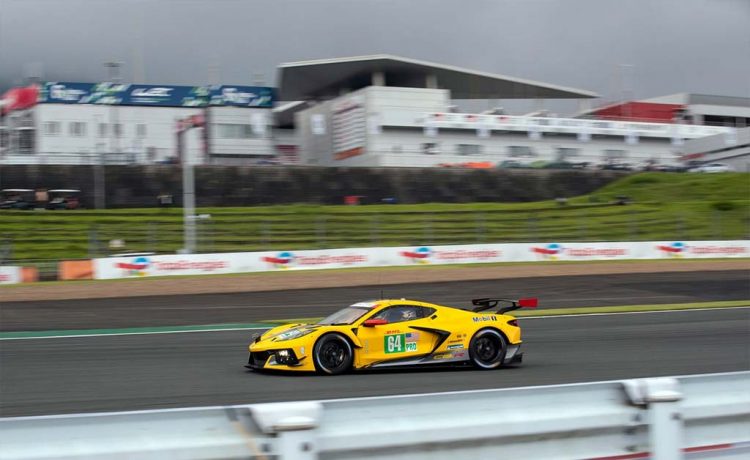 OYAMA, Japan (Sept. 10, 2022) – Corvette Racing will start fifth among GTE Pro runners Sunday morning in Japan as it tries for a second straight victory in the FIA World Endurance Championship.

Nick Tandy set a lap of 1:37.127 (105.074 mph) in the No. 64 Mobil 1/SiriusXM Chevrolet Corvette C8.R that he will share with Tommy Milner in the Six Hours of Fuji. Only 0.756 seconds separates all of the GTE Pro entries, an interesting prospect for another thrilling race in the category.

Tandy and Milner won in their last time out at the Six Hours of Monza, which was the first victory for Corvette Racing as a full-time FIA WEC entrant. With Fuji being a much more technical circuit that Monza – another new track for the Corvette program – the bulk of the three practice sessions were spent developing and fine-tuning chassis and aero setups, plus evaluating different tire compounds with an eye toward the race.

Both Milner and Tandy were happy with the long-run prospects of the Corvette after the final practice leading into qualifying.

Fuji is the Corvette program’s 32nd venue during its nearly 25-year run of racetracks around the world with Bahrain still to go in the WEC’s season finale.

The Six Hours of Fuji for the FIA World Endurance Championship is scheduled for 11 a.m. JST Sunday /10 p.m. ET Saturday from Fuji Speedway in Japan. The race will air live on MotorTrend from 9:30-11 p.m. ET on Saturday and the final hour and post-race from 3-4:30 a.m ET on Sunday. Live streaming coverage of the race an on-board feed from the No. 64 Corvette will be available on the MotorTrend Plus app. Radio Le Mans’ RS1 channel will stream play-by-play and race commentary from 9:30 p.m. ET on Saturday through 4:30 a.m. ET on Sunday. “Since Free Practice One, we’ve been at a pace deficit that has been similar throughout all the sessions. We’ve been improving the car, but it seems like something fundamentally with the circuit, how the car is working on the tires and other factors aren’t suiting us on single-lap performance. Looking at qualifying, things were better again from Free Practice Three, which was better from Free Practice Two. But of course, everyone else also is going faster. It’s kind of frustrating because we are improving and the Corvette is better to drive, but we are lacking a little bit of single-lap pace.

“Of course this a new track to us and the one where Tommy and I have the least amount of experience on the WEC calendar. There’s something else kind of happening where our car and the tire combination isn’t working with the track surface. We can look again and come up with a few ideas for the race.

“Typically, we are better in race pace in this WEC season than we’ve been in qualifying. We haven’t had a pole outside of Le Mans, but we manage to run at the front once the race gets going. There is still a long race to come. The thing with WEC is that you do have to double-stint tires, and up to two hours on a set of tires here is going to be a challenge for every team. Let’s see what happens.” How to Watch Corvette Racing at the Six Hours of Fuji