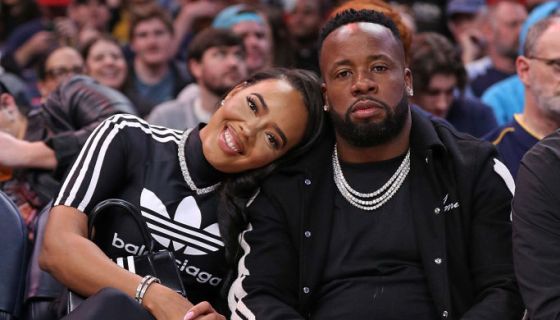 After successfully clutching his longtime crush, Yo Gotti attended an NBA game alongside his color-coordinated boo.

As previously reported the rapper, 41, and Angela Simmons, 35, went public with their romance on New Year’s Eve and it made national waves considering that Gotti first professed his interest in Angela in 2015 on “Down in the DM.”

Two years later, the very persistent rapper dropped more lyrics about crushing on Angela on the track “Save It For Me.”

“Passed my number to Angela,” rapped Gotti. “I thought I had her/Her n***a cuffed her, married, it made me madder/I respect it, I’m moving on, but the truth is I want her badder/Maybe me sayin’ her name made him move faster/Maybe me bein’ a G was kind of bad for her/But me bein’ a G, I was glad for her.”

Now they’re showcasing their coupledom by wearing matching outfits. during their first public appearance. The pair was in Gotti’s hometown Wednesday for the Memphis Grizzlies VS. Cleveland Cavaliers game.

The cute couple was color-coordinated in black-and-white with Gotti wearing Amiri and Angela donning Adidas for Balenciaga.

“Long as I’m next to you,” Angela captioned a photo from their night out.