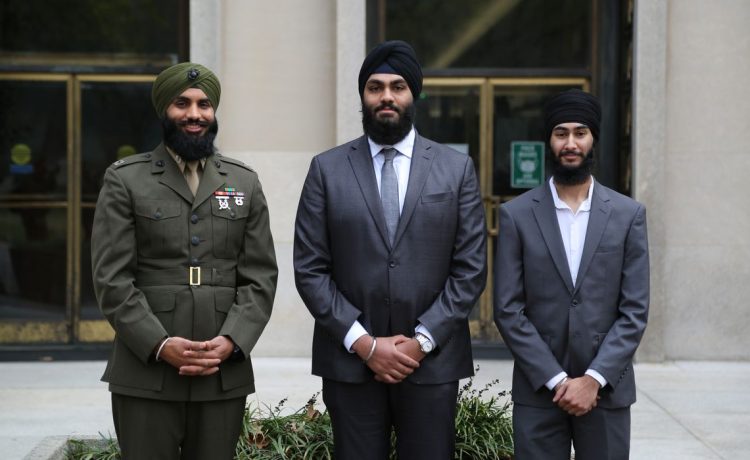 A federal appeals court has ruled that members of the Sikh faith can maintain their beards and serve in the U.S. Marine Corps, capping a two-year legal battle.

Mr. Chahal and Jaskirat Singh will be allowed to immediately proceed to Marine training, while the appeals panel ordered a district court to rehear the Aekash Singh case because he wants to attend Officer Candidate School.

The Sikh Coalition said the ruling should have “a positive effect” on cases such as Capt. Toor, who is appealing his limited accommodation as an active duty officer.

Wearing uncut hair and beards are two of the ritual requirements of Sikhism, a religion with approximately 30 million adherents worldwide. Some 700,000 Americans are followers and most Sikh males contain their hair in turbans.

Sikhs who enlist in the Army, Navy and Air Force have received religious exemptions for beards, long hair and turbans, but the Marine Corps has resisted, saying Sikh recruits could only have beards and long hair after completing basic training, also known as “boot camp.”

The Sikhs said a requirement to cut their hair and remove their beards during basic training would cause them to violate deeply held religious beliefs and infringe on their right to the free exercise of their religion.

The Marine Corps argued that granting concessions to the Sikh recruits would disrupt troop uniformity and appearance among recruits, but the service already allows beards for medical reasons. The Marines also permit women to keep long hair and have relaxed rules on tattoos.

The court’s three-judge panel said the Marine Corps didn’t explain why the service “cannot apply the same or similar [religious] accommodations that the Army, Navy, Air Force, and Coast Guard provide.” The court said the deviation was especially unjustified in light of “the exemptions already made for other Marine recruits’ beards, hair, and other individual physical indicia,” along with what the judges said was the Corps’ “own history of flexible grooming and uniform requirements” since its creation in 1775.

Because of these factors, the Court found that the Sikh recruits “not only have a substantial likelihood of success on the merits— it is difficult to imagine them losing.”

Eric Baxter, vice president and senior counsel at the Becket Fund for Religious Liberty, which represented the Sikh plaintiffs, said the ruling “sends a strong message to the United States military to stop dragging its feet on accommodating observant Sikhs and others who have religious articles of faith.”

“These individuals are great Americans, they want to serve our country at a time when many are stepping away from military service [and] it’s time to fully embrace them and welcome their contributions to our military,” he said.

Amrith Kaur Aakre, legal director for the Sikh Coalition, which also participated in the case, said the recruits will have to rearrange some aspects of their lives before reporting for duty.

“These guys have been waiting for so long,” Ms. Aakre said in a telephone interview. “They obviously have school and classes and other jobs in the works. We’re going to make sure we understand the exact timeline in terms of how quickly they can ship out and what their actions might be on that front.”

The Marine Corps did not respond to a request for comment.