Cracks appear in U.S. bipartisan support for Ukraine as bills mount, economy near brink of recession 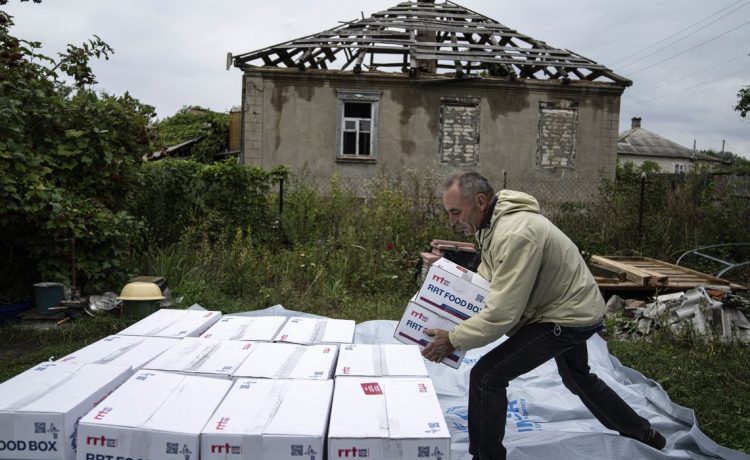 As the price tag on American military aid to Ukraine rises and the U.S. economy teeters on the brink of a recession, cracks have begun to show the once rock-solid bipartisan support in Washington for providing Kyiv with the support it needs to fend off Russia’s now 8-month-old invasion.

Doubts within both the Democratic and Republican parties have spilled into the open, with the Biden administration scrambling to downplay the discord against a backdrop of increasingly heated political rhetoric ahead of the Nov. 8 midterm elections.

The most recent twist found Democrats with egg on their faces this week after the Progressive Caucus, a group of far-left House members, sent a letter to President Biden urging him to pursue direct talks with Russia and pair U.S. support for Ukraine to a push for a cease-fire. The caucus announced Tuesday that it had retracted the letter following its rejection by the White House and outrage from party centrists.

On the Republican side, meanwhile, House GOP leader Kevin McCarthy has triggered a wave of party hand-wringing by warning that Republicans won’t write a “blank check” for Mr. Biden regarding military and economic support for Ukraine if they win back the House majority.

Capitol Hill insiders say Mr. McCarthy had fiscal responsibility, not foreign policy, in mind in making the comment, but was also signaling he’s not deaf to the GOP’s own populist right flank, which has been the most critical of Mr. Biden’s Ukraine policy and have questioned who has the better case in the eight-month war.

“There can be no room in the conservative movement for apologists to Putin,” the former vice president told an audience at the Heritage Foundation on Oct. 19, a day after Mr. McCarthy’s “blank check” comment.

“There is only room in this movement for champions of freedom,” said Mr. Pence, who criticized those in the GOP pushing a more isolationist foreign policy, even as he has campaigned heavily on behalf of Republican midterm candidates — including some, such as Arizona’s Republican Senate candidate Blake Masters, who has labeled the Russia-Ukraine conflict a “European problem” and tweeted that “Ukraine is crucial to Russian security, not to ours.”

The U.S. debate is spilling over into Europe, where leading powers have joined Washington in condemning Russia’s invasion but have let the Biden administration take the lead in providing Kyiv with military and economic assistance to continue the fight.

Europeans are wary that the upcoming U.S. midterm elections will result in a Republican takeover and subsequent decline of Washington’s support for Ukraine,”  Alexandra de Hoop Scheffer director of the Paris office of the German Marshall Fund of the United States, wrote in a blog discussion Thursday for the Carnegie Europe think tank. “…This in turn could carry over to Europe and undermine the continent’s ability to support Kyiv.

“The transatlantic burden-sharing debate is well and alive,” she added. “If there is one thing Europeans have learned from Donald Trump’s election, it is that U.S. domestic politics matters and directly impacts alliance cohesion and foreign policy decisions.”

Taken as a whole, the U.S. political divisions appear to show a churning debate in Washington over the future of U.S. policy toward the war. Once-unquestioned support for Kyiv, and a willingness to follow Ukraine’s lead on an acceptable end to the fighting, are now in question as never before.

“I do see cracks in the bipartisan support for Ukraine right now, particularly given the rhetoric from several congressional candidates,” says Laura Thornton, who heads the Alliance for Securing Democracy at the German Marshall Fund.

Ms. Thornton told The Washington Times in an interview that the reason for the cracks is varied. “They range from concerns about finances to maybe a more ideological ‘America First’ protectionist isolationism, to an actual pro-Kremlin view of the war.”

Others, however, argue that talk of a real division on Ukraine policy within the parties — or of a mounting shift away from supporting Ukraine — is being overhyped within the context of the high-stakes midterm elections, when the parties are least interested in projecting unity on any issue.

“I think there’s a very online segment of both parties that probably embodies some of this, but I don’t think it represents mainstream America,” says Peter Rough, a senior fellow at the Hudson Institute.

“I just don’t see a deep and enduring rift in either party. I still think there’s broad-based support for Ukraine,” Mr. Rough said in an interview.

But international media coverage and other civil society scrutiny of the United States has increasingly homed in on the prospect of waning U.S. support for Ukraine.

The Germany-based Kiel Institute for the World Economy has documented that U.S. spending commitments for backing Ukraine with financial, humanitarian and military aid have dramatically outstripped those of any other nation in the ad-hoc alliance of democratic countries supporting Kyiv, including NATO member states.

A report by the BBC on Thursday noted that Mr. McCarthy’s “blank check” comment dovetailed with previous statements by some other prominent Republican lawmakers, including Missouri Sen. Josh Hawley, who said in May that Ukraine aid is “not in America’s interests” and “allows Europe to freeload.”

Ms. Thornton says the more concerning issue centers on statements by candidates that veer into the territory of mimicking or directly projecting Russian propaganda about Ukraine — calling Ukrainians “Nazis,” promoting Kremlin maps referring to Crimea as a part of the Russian empire, and claiming the U.S. and NATO provoked the war by expanding to Russia’s border and that somehow the U.S. is behind the recent Nord Stream pipeline explosions.

Ms. Thornton, in a piece this month for Foreign Policy.com, highlighted the findings of the “Midterms Monitor,” a joint social-media tracking project of the Alliance for Securing Democracy at the German Marshall Fund and the Brennan Center for Justice that has captured more than 2,300 Ukraine-related tweets since Aug. 1 by U.S. candidates for Congress or high state office.

“Many of these posts are critical of Russia and back U.S. policy on the war. Some criticize the high cost of aid,” she wrote. “But a noisy minority — most, but not all, Republicans —are also parroting the most egregious Kremlin propaganda.”

Ms. Thornton cited a range of examples, including that of Donnie Palmer, a Republican House candidate from Massachusetts, writing that he has praised former President Donald Trump “by saying: ‘Did he get us into a war? …did he blow up 2 pipelines? is he backing Nazis in Ukraine?’”

But she also pointed to Democrats who have parroted Russian talking points.

Geoffrey Young, a Democratic House candidate in Kentucky, has “tweeted some 680 times about Russia or Ukraine since Aug. 1, including retweeting the Russian state-owned propaganda network RT, Redfish, and some of Russia’s most infamous propagandists…[and] launder[ed] Putin’s narrative that Ukrainians are ‘Nazis,’” Ms. Thornton wrote in Foreign Policy.

In her interview with The Times, she lamented that proponents of sustained support for Ukraine have failed to effectively counter the spread of such propaganda into the political dialogue.

“We need to explain to Americans why Ukraine matters to us, why this is important to our democracy and to democracy in the world, as well as to our economy, our political health and our stability,” she said. “If we did that in spades, we would be flooding out these minority voices.”

Mr. Rough agreed, but placed blame on the Biden administration for failing to do enough to explain the merits of maintaining U.S. leadership in standing up for Ukraine against Russia.

“If the president were actually out giving speeches on a regular basis with some sort of rhythm to them about the importance of supporting Ukraine, it would be helpful,” Mr. Rough said. “In foreign policy, presidential leadership and the bully pulpit matter a lot in shaping public opinion.”

“The president is just as much the explainer-in-chief as he is the commander-in-chief and Biden has been totally absent in this respect.”