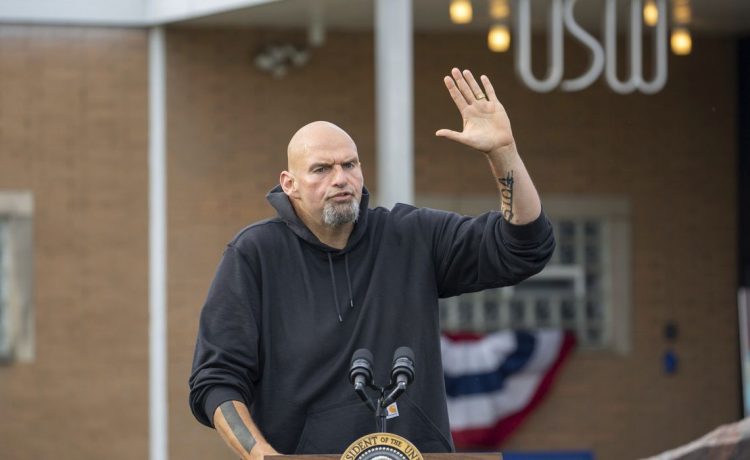 The long-simmering debate over giving convicted criminals an early release from prison and a second chance has boiled over into this year’s U.S. Senate races as voters view rising lawlessness and violent crime as a major problem.

Sen. Catherine Cortez Masto of Nevada and Pennsylvania Lt. Gov. John Fetterman have been criticized for serving on their states’ pardon boards that recommended rewarding prisoners for their good behavior behind bars with reduced prison sentences.

It is part of the GOP’s broader strategy to tap voter anxiety over a national crime wave and pin the blame on President Biden and Democrats in Congress who are defending fragile House and Senate majorities in the midterm elections.

Speaking on the floor of the Senate, Minority Leader Mitch McConnell put a fine point on the issue, saying the Democratic vision is wrong for the nation.

“One especially damaging myth is the liberal notion that making our country kinder means having weaker public safety, weaker justice for criminals, and weaker borders,” Mr. McConnell, Kentucky Republican, said. “There is nothing compassionate about tolerating or even encouraging anarchy at the border, violence in our streets, and a steady erosion of public safety.”

“It is neither fair nor compassionate, not to any Americans, least of all to the vulnerable people Democrats say they’re helping,” he said.

Mehmet Oz, the Republican nominee for U.S. Senate in Pennsylvania, is hammering home a similar message. Polls show him trailing Mr. Fetterman, who has been a vocal advocate for pardons, reprieves, commutations and executive clemency.

Mr. Oz, a political newcomer and TV celebrity doctor, blasted out an email this week slamming Mr. Fetterman for joining four other members of the board of pardons in unanimously recommending the release of a man convicted in 1993 in the killing of a small-time drug dealer.

The condemnation of Mr. Fetterman included a comment from the victim’s brother, Thomas, who said, “He gets to leave prison, and the only way I can visit my brother is up the hill at his gravestone.”

“Nobody reached out to the [Bostedo] family to ask their opinion or anything like that. Not saying Danny was a saint. But did he deserve to die? No, he didn’t deserve that.”

In Pennsylvania, the board of pardons makes a non-binding recommendation to the governor who has the final say.

Mr. Oz also has an “Inmates for Fetterman” website that catalogs stories of other prisoners who have benefited from the pardon board’s decision which also, in some cases, did not sit well with the families of the victims.

Ms. Cortez Masto has suffered similar criticism for her work on the Nevada Board of Pardons Commissioners during her stint as state attorney general from 2007 through 2014. The National Republican Senatorial Committee, the campaign arm for Senate Republicans, is running a Spanish-language ad that charged she voted “more than 75 times to minimize the sentences of violent criminals.”

The Cortez Masto campaign did not respond to multiple requests for comment.

The campaign recently told the Nevada Independent that the attack was  “demonstrably false” and pointed out she served under Republican Gov. Jim Gibbons and Brian Sandoval, who also had to sign on decisions.

The Cortez Masto campaign told the news website the Democrat had voted to commute the sentences of violent criminals 35 times – roughly 11 percent of the 321 votes she cast.

For his part, Mr. Fetterman is standing his ground.

“You have an opportunity to really make a big impact on second chances,” Mr. Fetterman told supporters at a campaign stop this year, according to the Philly Inquirer. “That, to me, means everything. You have an opportunity to decide what direction we take in our society. Should you pay for the rest of your life for a mistake that you made if you were addicted or you were young, or you were in poverty?”

The National Republican Senatorial Committee, the campaign arm for Senate Republicans, meanwhile, said Ms. Cortez Masto and Mr. Fetterman are the liberal “architects” of bad policies that are leading to rampant crime.

“Democrats’ position on crime is to make it worse in the name of faux progressivism,” said NRSC spokesperson T.W. Arrighi. “Voters want a return to law and order.”

Patrick Burgwinkle, a spokesperson for the Democratic Senatorial Committee, countered that the “false attacks will not distract voters from Republicans’ deeply flawed candidates” and their far-right agenda.

The warnings from the GOP Senate campaigns and their allies are playing out amid increased concerns about crime, including in Las Vegas, Philadelphia, and other cities where homicides have ticked up.

A Gallup poll released earlier this year found that concerns about crime and violence were climbing. For the first time since 2016, a majority (53%) said they worry a “great deal about crime,” said the pollsters.

The crime wave sparked intense debates over the role of police departments and calls for a rethink of the criminal justice system, including home best to address the revolving door and recidivism rates.

While prison reform advocates say inmates are capable of rehabilitation and in some cases deserving of a fresh start, the tough-on-crime crowd says the severity of some crimes forfeits the right to a second chance.

“With sky-high crime across Pennsylvania, it’s important for voters to know John Fetterman is putting criminals before victims and our communities,” said Brittany Yanick, an Oz campaign spokesperson.

Ms. Yanick shared a video in which Mr. Fetterman touted his work on the pardon board as a badge of honor.

“As chair of the board of pardons, I’m proud to say my administration has conferred more second chances than every administration in Penn history combined,” he said in the clip.

Indeed, Mr. Fetteman has refused to apologize for contributing to the early release of prisoners or for hiring a pair of paid staffers who were convicted of murder and spent decades in prison before their sentences were commuted.

Kevin Ring, president of FAMM, a group that advocates for a more fair and effective justice system, said the attacks against Mr. Fetterman and Ms. Cortez Masto are “unfortunate.” He described it as a product of the “political silly season” in which candidates are grasping at ways to address the crime issue.

“What is unfortunate about it is for all the reasonable debates that can be had about bail reform and the revolving door and people who commit repeated crimes, these clemency cases involve people who have served decades in prison,” he said. “These are the least likely to re-offend.”

“These attacks are really just you can’t possibly believe someone who did something like this deserves a second chance,” he said. “Fetterman to his credit says I think they do deserve a second chance.”