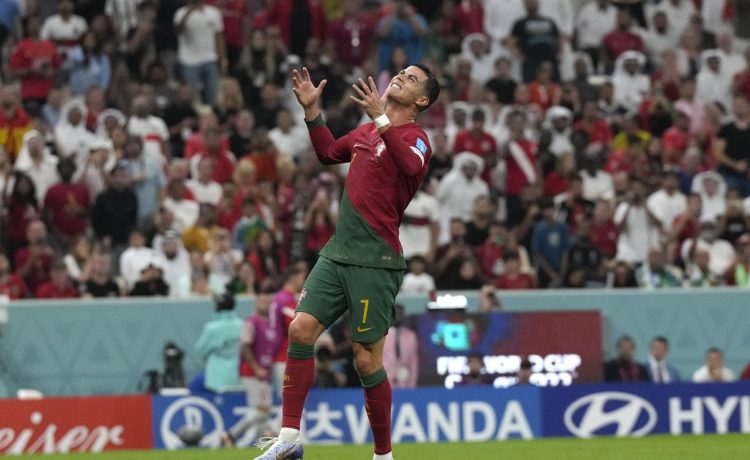 DOHA, Qatar — Cristiano Ronaldo was dropped from Portugal’s starting lineup for the second straight match at the World Cup.

The 37-year-old Ronaldo won’t play from the outset in the quarterfinal match against Morocco on Saturday, after starting on the bench and then coming on as a substitute for the round-of-16 match against Switzerland.

Gonçalo Ramos, who scored a hat trick on Tuesday in Portugal’s 6-1 win over Switzerland on his first start for Portugal, was again selected ahead of Ronaldo.

Ronaldo is playing in his fifth and likely final World Cup.

He was left out of the lineup against the Swiss after coach Fernando Santos expressed frustration about his team captain’s attitude in the previous game.

Santos later said Ronaldo was “not happy” to be told he was being benched, but never threatened to leave the World Cup because of the decision.

Ronaldo, the all-time leading scorer in men’s international soccer with 118 goals, eventually came in as a replacement in the 74th minute. He had looked somewhat disconnected from the rest of the squad after the match, and had already shown a poor attitude after being substituted in the last group game against South Korea.

Ronaldo was coming off lackluster performances in the group stage, though he scored in the 3-2 win against Ghana to become the first player to score in five World Cups. He has played in every edition of the tournament since 2006.

Portugal is trying to make it to the last four for the third time, having finished third in 1966 and fourth in 2006. It hadn’t gotten past the round of 16 since that tournament in Germany 16 years ago.