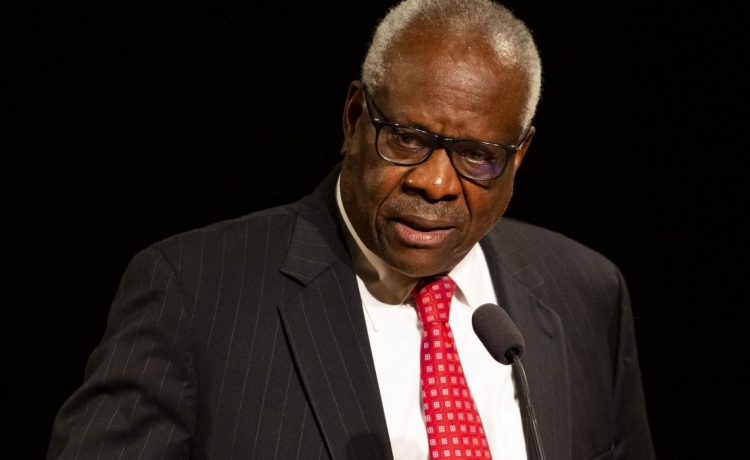 Liberals who love to hate Supreme Court Justice Clarence Thomas have invented another reason — his opposition to an assault weapons ban in Highland Park, Illinois, in a 2015 court case that upheld the ban.

Some progressives now are blaming Justice Thomas for Monday’s shooting in Highland Park that left at least seven dead and dozens wounded, despite his written dissent seven years ago having no legal effect on the town’s gun-control law.

Other social media posts, mostly anonymous, accused Justice Thomas of having “blood on his hands” or called for his impeachment.

He said Justice Thomas is “the same justice who wrote the opinion just a week or so ago that really basically said that there’s limitation on the regulation of these guns.”

“So we can see that there [are] dots to be connected here, and they’re not very encouraging on a six-to-three [conservative majority] court,” Mr. Durbin said on MSNBC’s “Morning Joe.”

New York’s gun laws still ban anyone from “manufacturing, transporting, disposing of or possessing an assault weapon in the state.”

A federal ban on assault rifles expired in 2004.

Highland Park’s ban was still in effect this week.

The conservative Justice Thomas, scorned by liberals since joining the court in 1991, has risen to the top of their enemies list this year after the high court overturned the landmark Roe v. Wade abortion ruling. Justice Thomas said the court also should revisit decisions on same-sex marriage and contraception.

Highland Park Mayor Nancy Rotering, a Democrat who signed the town’s law banning assault weapons in 2013, said Tuesday that the gun used in the shooting at the community’s Independence Day parade was “legally obtained.”

Police have arrested a 22-year-old suspect who was reportedly “known to law enforcement” before the shooting.

When Highland Park’s assault-weapons ban became law, a local doctor and the Illinois Rifle Association challenged it in court.

The appeal reached the Supreme Court, which refused to hear the case and let stand a lower court’s ruling in favor of the ban.

Justice Thomas dissented in 2015 with the late Justice Antonin Scalia, writing that the “overwhelming majority” of gun owners use such firearms lawfully. He called them “modern sporting rifles.”

“Roughly five million Americans own AR-style semiautomatic rifles,” the dissent stated. “The overwhelming majority of citizens who own and use such rifles do so for lawful purposes, including self-defense and target shooting.”

But the high court let stand the ruling by the U.S. Court of Appeals for the 7th Circuit, which called assault rifles “the weapons of choice in mass shootings.”

“A ban on assault weapons and large‐capacity magazines might not prevent shootings in Highland Park (where they are already rare), but it may reduce the carnage if a mass shooting occurs,” the lower court said.

Justice Thomas wrote in 2015 that the Supreme Court should have heard the case “to prevent the Seventh Circuit from relegating the Second Amendment to a second-class right.”

“The county assault weapons ban did NOT stop the Highland Park shooting,” tweeted Rep. Marjorie Taylor Greene, Georgia Republican. “And the Supreme Court refused to hear a challenge against the ban, so SCOTUS can’t be blamed either.”

But some gun rights advocates say the high court’s decision in the New York case last month could portend the overturning of other gun laws.

They point to this passage in particular by the majority: “When the Second Amendment’s plain text covers an individual’s conduct, the Constitution presumptively protects that conduct. The government must then justify its regulation by demonstrating that it is consistent with the Nation’s historical tradition of firearm regulation.”