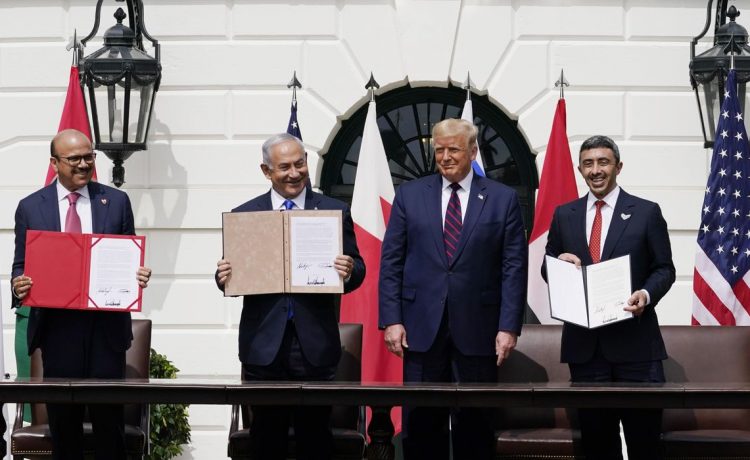 The Biden administration has cautiously embraced the Trump-era “Abraham Accords” ending a long diplomatic freeze between Israel and key Arab power, but has missed a crucial opportunity to build on the historic agreements by capitalizing on growing regional unity against the threat posed by Iran.

As President Trump’s signature diplomatic breakthrough marks its second anniversary this week, critics say President Biden has focused on a floundering pursuit of a renewed nuclear deal with Tehran while failing to expand the game-changing normalization agreements forged by Mr. Trump and his aides.

Whether or not the nuclear deal is achieved, some analysts say the moment is ripe to promote greater alignment between the region’s predominantly Sunni Muslim Arab nations and Israel, which has long been the arch-enemy of Iran, the region’s Shiite Muslim powerhouse.

The expansion would mark a transformative shift in Israel’s position in the region, ending its long isolation from much of the region and presenting a united front against Tehran.

“The mutual fear of Iran presents obvious opportunities for new alliances between Israel and the Sunni states,” said Jonathan Schanzer, a Middle East scholar with the Foundation for Defense of Democracies.

Mr. Schanzer offered the comment after former President Trump’s son-in-law Jared Kushner, a key architect of the deal with the United Arab Emirates, Bahrain and other Arab states, openly lamented what he said was the failure of the Biden administration to do more to advance the Abraham Accords since taking office nearly two years ago.

“I think the biggest disappointment so far is that more countries haven’t been brought into it,” Mr. Kushner said Monday at an event hosted by his own Abraham Accords Peace Institute and the pro-Trump American First Policy Institute celebrating the accords ahead of their official Sept. 15 anniversary.

Mr. Kushner, who served as a top Middle East adviser in the Trump administration, played an instrumental role in negotiating the accords, which involved an unprecedented push to encourage Arab and Israeli leaders to put aside longstanding disputes over the Israeli-Palestinian conflict and instead focus on building direct economic, diplomatic and security ties.

Breaking with the long-held orthodoxy in Washington, Mr. Trump and Mr. Kushner argued progress could be made despite the frozen Israeli-Palestinian conflict — and that, in the long run, a durable settlement for the Palestinians could be helped by better ties between Israel and its neighbors.

The effort culminated with a September 2020 ceremony in Washington, at which normalization agreements between Israel, the UAE and Bahrain were inked — representing the first public acknowledgments of Israel by Arab nations since Egypt and Jordan had broken from the rest of the Middle East to establish diplomatic ties with Israel in 1979 and 1994, respectively.

The accords, named after the prophet recognized by Judaism, Christianity and Islam, were subsequently expanded to include diplomatic deals by Israel with Morocco and Sudan.

Oil-rich Saudi Arabia, which is widely considered to be the most powerful of the Gulf Arab powers, has signaled tacit acceptance of the spirit of the accords, but so far has declined to formally join.

Mr. Biden, who cautiously welcomed the Trump agreements upon entering office, so far has not promoted an expansion of the accords in a full-throated manner. As the one-year anniversary of the agreements approached last August, the president offered the broad assessment that a deepening of Israeli ties with the “Arab and Muslim neighbors” and “globally” was a “trend that I think should be encouraged and not discouraged and we’re going to do all we can to be value-added.”

U.N. Ambassador Linda Thomas-Greenfield told an Abraham Accords anniversary event in New York last September that “clearly, we want to build on this model and replicate this success.” But critics say the administration’s regional approach has been less focused, returning again to the possibility of an Israeli-Palestinian peace process and to restoring the Iran nuclear accord that Mr. Trump repudiated in 2018.

Mr. Biden’s campaign pledge to make Saudi Arabia a “pariah” over the 2018 murder of Washington Post opinion writer and Saudi critic Jamal Khashoggi, meanwhile, dampened the prospect that the kingdom may be open to U.S. entreaties for it to join the Abraham Accords.

‘Very close’ to a bigger deal

Former U.S. Ambassador to Israel David Friedman, who was also instrumental to the Trump-era push on Arab powers to normalize with Israel, told The Washington Times in an interview late last year that the former administration had been “very close” to getting Saudi Arabia to join the Abraham Accords in 2020. He lamented that the Biden administration had squandered the momentum.

“They took their time even using the phrase ‘Abraham Accords,’” said the former ambassador, who argued that the troubled U.S. withdrawal from Afghanistan and the lengthy diplomatic push for rapprochement with Iran had shaken regional confidence in America’s image as a strong ally capable of drawing more countries, most notably the Saudis, into the agreements.

The accords did, however, factor heavily into a major trip Mr. Biden made in July to the Middle East, where the president visited both Israel and Saudi Arabia and took a historic direct flight between the two nations. He also succeeded in promoting stronger security coordination between Arab powers and Israel in general — a once unthinkable but increasingly viable pursuit amid mutual Arab and Israeli concern over threats emanating from Iran.

The trip fostered key cooperation between Egypt, Israel and Saudi Arabia, with administration officials helping to finalize a deal in which Egypt transferred sovereignty over two strategic Red Sea islands to Saudi Arabia. Israel’s access to the Red Sea requires passage through the islands, the status of which had been unresolved since the 1979 Israeli-Egyptian peace treaty.

Mr. Schanzer praised the development, telling The Times on Tuesday that it “amounted to Saudi recognition of Israel,” and that “the Biden administration deserves credit for this, even if it was an initiative first conceived by the Trump administration.”

“But Biden [has] left a lot on the table,” said Mr. Schanzer. “The momentum has slowed, and that falls on the president’s shoulders.”

It’s unclear, meanwhile, whether the administration has the foreign policy bandwidth or desire to capitalize on regional unease over its Iran policy by using it to encourage more Arab powers to join the Abraham Accords.

In contrast to Mr. Trump, who pulled the U.S. out of the Iran nuclear deal in 2018 and re-imposed sanctions on Tehran, Mr. Biden has spent the past two years waiting for the Islamic republic to accept his offer to ease sanctions in exchange for a return to compliance with the agreement’s curbs on its suspect nuclear programs.

The original 2015 deal between Iran, the U.S., Europe, China and Russia had given the Islamic republic sweeping sanctions relief in exchange for limits to and inspections of its nuclear program. Iran claims the program is peaceful, but the United Nations Security Council has long suspected it of being geared toward making atomic bombs.

“With an Iran deal lingering, two things are happening. On the one hand, some countries are hedging by engaging with Iran in an effort to de-conflict,” said Mr. Schanzer. “On the other hand, regional players are looking to draw closer to Israel, which is the only country truly capable of challenging the Islamic Republic, whether it springs toward a bomb or not.”

“More can be done to move Saudi Arabia in the right direction,” he said. “Indonesia could be a candidate. So could Oman. So could Qatar. Even Kuwait.”

“There was a sense of eventuality about normalization in 2020,” Mr. Schanzer said. “I think most observers still believe that this is where the region is heading. U.S. influence can speed things up and shape the future alignments of the region.”

“Normalization is crucial for the future of the Middle East,” he added. “The last seven decades have seen multiple rounds of needless violence that have only served to impoverish and destabilize the region. If peace expands, the opportunities for cooperation in technology, agriculture, cyber, water, intelligence and other areas are virtually endless.”