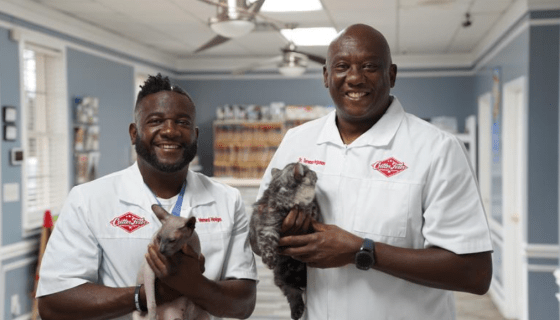 Nat Geo’s “Critter Fixers” are back for a FOURTH season and the award-winning docs turned trending topics recently chatted with BOSSIP.

Dr. Vernard Hodges and Dr. Terrence Ferguson, the Black veterinarians who own and operate Critter Fixer Veterinary Hospital located 100 miles south of Atlanta, are bringing viewers back into inside look into their world where they tirelessly work as animal doctors on Critter Fixers: Country Vets. 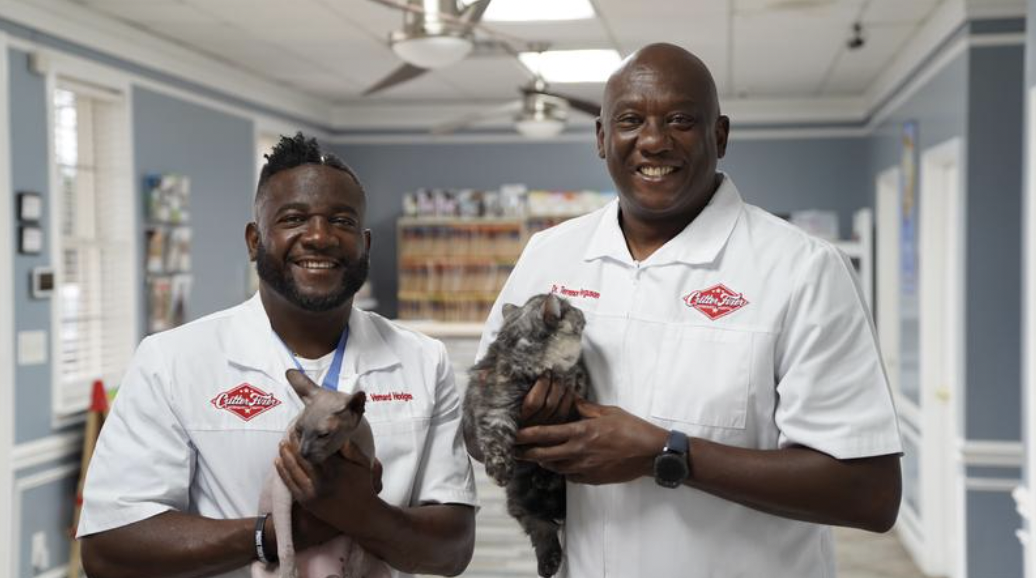 The doctors who own and operate two full-service clinics in rural Georgia and treat more than 30,000 patients a year have charmed Nat Geo watchers who are entranced by their show that combines humor, heart, and soul while educating the masses on the science of treating animals.

Below Dr. Hodges and Dr. Ferguson dish on their double HBCU degrees, their “Vet For A Day” program, and Critter Fixers’ fourth season premiering Saturday, October 8 at 9/8 c on Nat Geo. 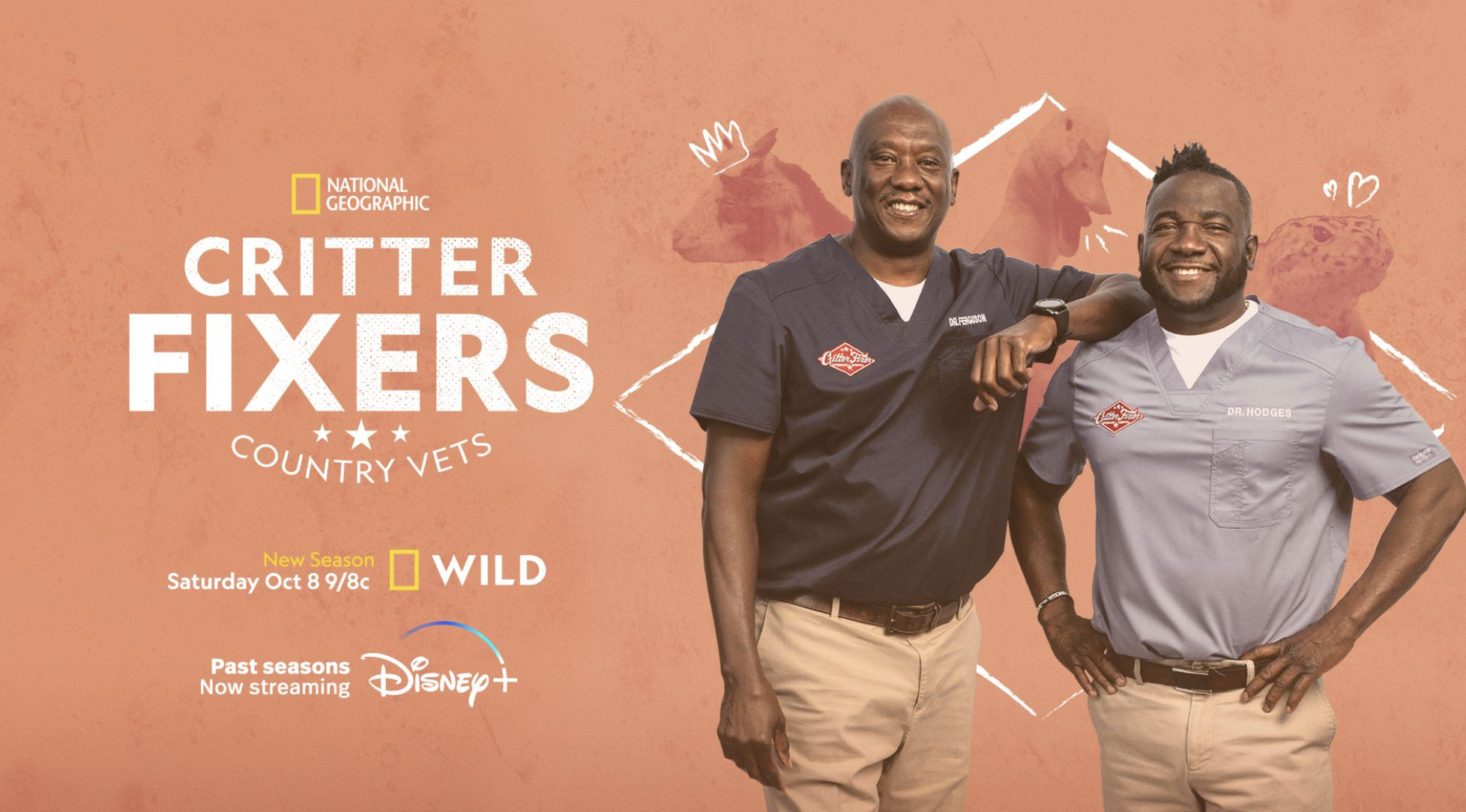 Black veterinarians are very rare in the United States. For both of you, how did your interest get peaked in becoming animal doctors?

Dr Hodges: For me, I’ve always had an interest in aquatics. I would go down as a kid and catch tadpoles, frogs, turtles, and fish, and do different things. So, I thought I would end up being the Black Jacques Cousteau. So, I majored in marine biology and did those things. As I got to the end of my senior year, I decided I really like all animals.  So, now I get to work on fish and aquatics, as well as dogs, cats, camels, and all those different things.

Dr Ferguson: For me, I guess I’m more the traditionalist. I wanted to become a veterinarian when I was roughly about eight years old. And what happened is I had a dog that was hit by a car. And being young, at that age, I thought that I had mended this dog back together and helped it to recover and it lit a fire in me to walk through to help animals and help dogs. And from then on, I wanted to become a veterinarian and was just blessed to make it through the journey.

BOSSIP is highlighting HBCUs as October is traditionally HBCU homecoming season, and we’d love to get your thoughts on Historically Black institutions. How did your undergrad experiences at Fort Valley State shape your careers as veterinarians? And also, tell us more about your time at Tuskegee Vet School, some people probably don’t even realize that this College of Veterinary Medicine exists.

So, it was just that love and that nurturing and that care and that wanting you to succeed is what got me over, so it definitely was where I needed to be at that point, and I’m glad I was. And if it wasn’t for that, I wouldn’t be here today. 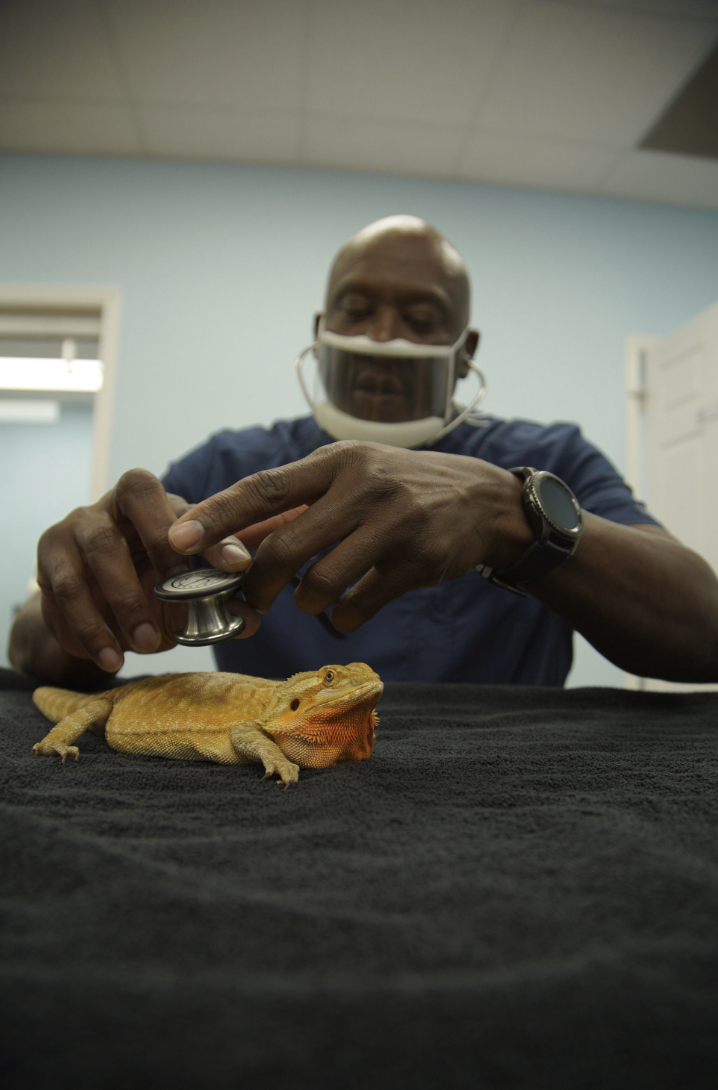 Dr Hodges: People talk about the black college experience and being at Fort Valley was amazing. I mean, you always meet lifelong friends, and that’s where Terrence [Dr. Ferguson] and I met 30 years ago in class, so that speaks to the lifelong friendships you usually make alongside getting into the HBCUs, and going to parties, and having a good time. But then we went over to Tuskegee and it was the same thing and same environment. The thing is with HCBUs, you know they want you to graduate. You got all these people who—if you ain’t doing what you’re supposed to do, they going to say; “Hey, you need to tighten up.” They’re almost like their mom away from home or dad away from home.

Also, there are only 32 veterinarian schools in the whole United States. And of the 32, only one of them is an HBCU and that’s Tuskegee. And Tuskegee has graduated, I think it’s almost 77% or 78% of all black veterinarians in the world. So, if you see a veterinarian and he’s black, he probably went to Tuskegee. So, you get this nurturing effect of Tuskegee being an HBCU and you felt like you could do it. You had black veterinarians who were your teachers. So, it was just like a loving family environment that put you in place when you needed to be put in place. 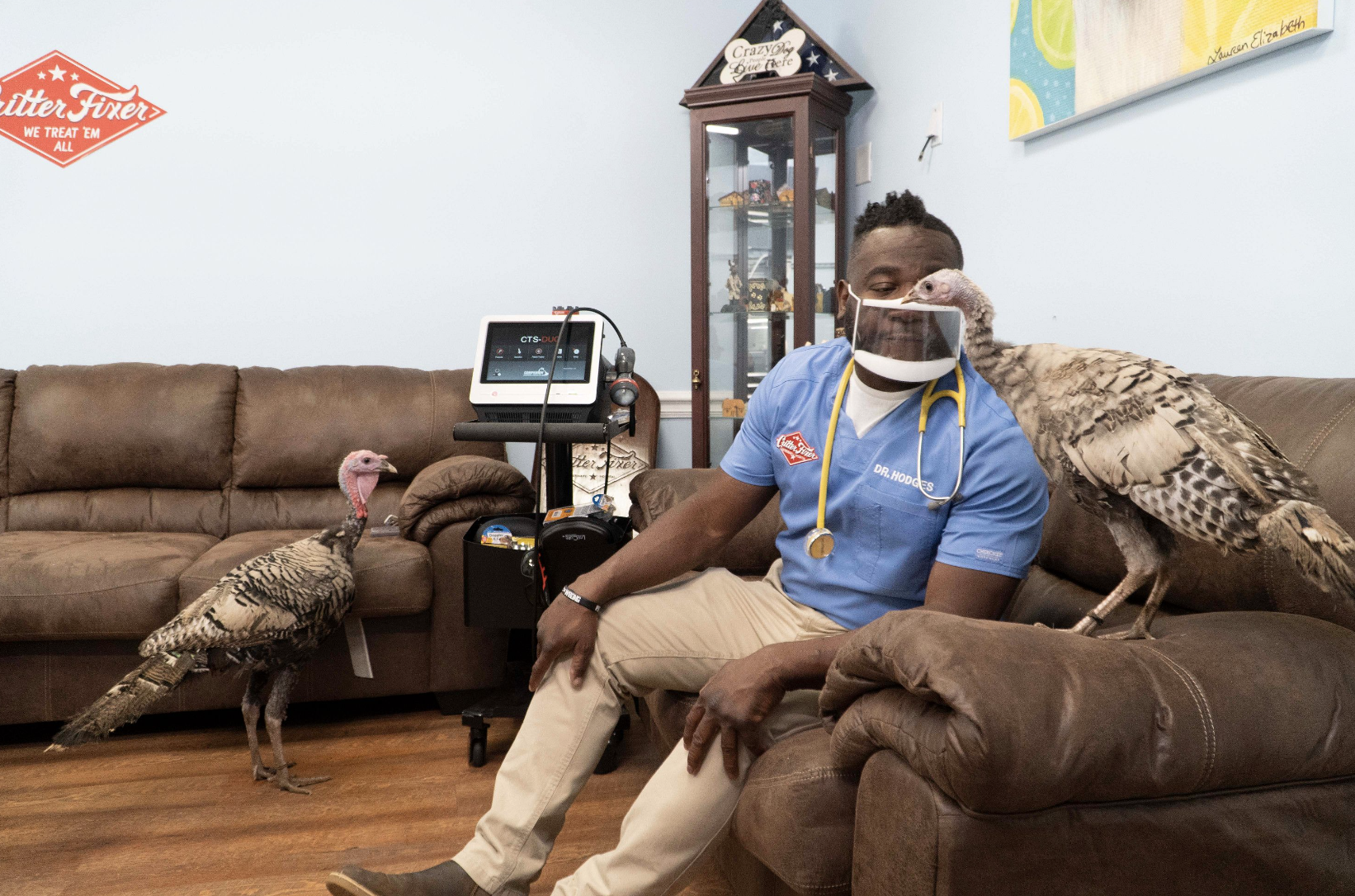 Let’s talk more about Critter Fixers and how it continues to garner attention and even awards. Congratulations on your Critics’ Choice Real TV Award for Best Animal/Nature Show! Why do you think people are so in tune with what you guys are doing on Critter Fixers?

Dr Hodges: Oftentimes, I’ll usually hear that people were flicking the channels and saw these two black men there, and they were funny, they were smart, and it’s so different. I think it just catches people off guard, because we can turn on the TV and we can see black attorneys and black physicians, but there’s just not any black veterinarian. So, I think that’s appealing and so many times we get moms and dads and grandmas who say, “My child loves animals and I don’t know how to get them to where they want to be. Can you guys help me?” And we don’t mind being that superhero for that kid who loves animals, and that’s what we almost become.

Even with that Critics’ Choice Award. We usually are pretty positive, we usually feel pretty good, but we had no idea [we were going to win] because we were going up against [so many other] shows… We had heard of Steve Erwin since he was a little boy. So, Steve Irwin was almost like a treasure in the animal industry. So it was like, “Okay, his family is nominated. No way we win.” So, when they called our name as the best animal and nature show on TV, it was like, “Whoa!” It’s almost like people are realizing that black people can be in that animal space.

Dr Ferguson: Yeah. And I think a lot of [it is] just uniqueness, of course. If you turn on the television and although it’s 2022, you’d be surprised how many times people say they still have never seen a black veterinarian until they turn the show on. So, of course, that’s there. But I think there’s the uniqueness, too, that Dr. Hodges and I share, we’re who we are and you see that on television as well.

And it’s funny, I had a message yesterday on Instagram, and the lady was saying that she likes to watch veterinary shows on television. And she loves our show, but she said, our show is the only one that she has to put the closed caption up. I said, “Yeah, I guess we’re country”, I thought that was funny.

But we love our profession. We enjoy one another. We enjoy our staff, and we’re like family. And we just do the best we can for these animals. And I think people can relate to that because of just the uniqueness and the genuine people that we are, and I think it shows through.

Let’s talk about season 4 of Critter Fixers which premieres Saturday, October 8. What will we see? Because it runs the gambit on the show; we see snakes, cows, all kinds of animals, and even celebrity appearances.

Dr Hodges: You going to still see a gambit of different animals but we going kick off the season with the two shows at nine and 10. You are going to see us perform the hardest surgery, in my opinion, that we’ve ever done. We do some [a lot] ofstuff, but this goose had a bone stuck in its trachea. The trachea is basically a windpipe. If you would imagine trying to keep this goose alive while putting him under anesthesia and getting the bone out of his trachea, it was… I mean, [I thought] it’s no way I thought this goose was going to live, as a matter of fact. But it lived and it’s flying around. So, you’re going to see some really extraordinary stuff. But you’re also going to see some of the heartwarming things like when we go out to do our “Vet For A Day” program,  that’s where we bring the kids and show them. And I’ll let Terence tell you a little bit about that.

Yeah. We were really involved in our community, and one of the things that just really close our hearts is, like Dr. Hodges mentioned earlier, only 2% of veterinarians are black, so we’re not a very diverse profession. So, what we decided to do [this program] because we always had kids who come up or their parents who would come up and ask,, “How can my kid become a veterinarian?” And we decided, well, what would be better than getting a lot of kids together at one time?

So, what we do is we have a full day or two for “Vet For A Day” where we bring kids in, and we split it up. We also partner with the university or another group and we have them come in and talk about how to become a veterinarian—What classes are important? How do you apply to undergrad? How do you apply to veterinary school? And it’s not only helping the kid, but it’s also helping the parents because a big part of the kid’s journey is the parents helping them along the journey. So, the more we can educate them, the more that we can help the child, as well.

Then the afternoon is really the fun time, which I call Dr. Hodges’ time. It’s when we bring them into the clinic, and we break them down into different groups, and we show them different things like how to take x-rays. They get to see live surgery, and how to do endoscopy, we do all these things live, and show them how to handle animals. They learn how to suture or stitch. And it’s just a really fun day with them.

And after doing it the first year, we actually partnered with the Zoetis Foundation, and this past year I think we hit about 12 locations across the country. And we have a couple more to go this year. And next year we hope to do over 20 where we actually go to different locations around the country and put on our program. And we’re just trying to hep decrease the lack of diversity in the veterinary field, and try to help and do what we can, and that’s kind of what we’re doing now. But this program has been very, very, very successful. And we try to make it even bigger and better every time.

Check out an exclusive clip below.

The Docs at Critter Fixer encounter a ferret with a fractured pelvis, treat a goat with septic arthritis and visit an adolescent groundhog. They also see a kitten who can’t see, soothe a bulldog with a tummy ache, look inside the mouths of snakes, and help a dog with a UTI. Then the Docs take on their toughest surgery ever, operating on a goose with a foreign object lodged in its trachea.

The Docs at Critter Fixer visit their ranch to check on a calf and back at the clinic, Lil’ goat meets the big G.O.A.T as Dr. Hodges treats a one-of-a-kind problem they’ve never seen before. Dr. Ferguson and a vet in training perform a tail amputation on a cat, the Docs help an older dog with huge hernia, treat a pet rat with a strange rash, and remove a pair of unmentionables from a dog.