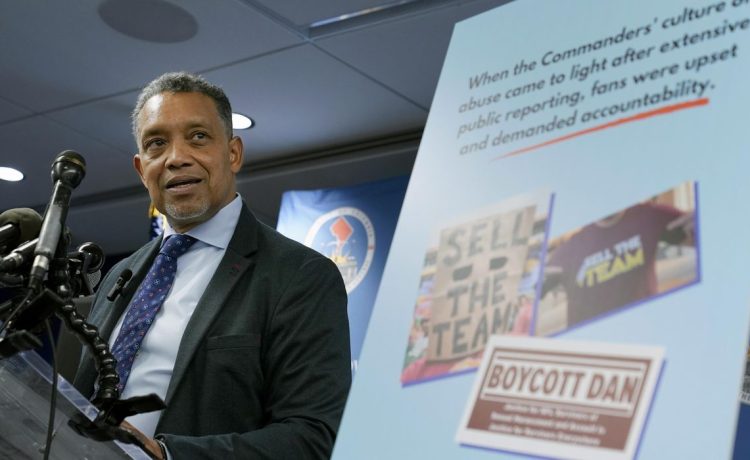 D.C. Attorney General Karl A. Racine’s attempt to punish Dan Snyder and the Washington Commanders for alleged sexual misconduct is innovative, but legal experts say it’s unlikely to stand up in court.

But Mark D. Bauer, an expert in consumer law and professor at Stetson University College of Law, said consumer protection laws usually require the deceptive practice to be central to the item being sold — in this case, a ticket to see a football game.

He said stretching that to include tahe team owner’s behind-the-scenes behavior toward women is a tough sell.

“It’s a very creative and unique approach that I don’t think will work,” Mr. Bauer said.

Todd J. Zywicki, a law professor at George Mason University, said Mr. Racine’s approach, if it were to succeed, could open the door to other crusading lawsuits. A movie studio accused of harassment could be dinged for ticket sales, or a restaurant accused of mistreating workers could face attempts to recover payment for meals served.

“It is easy to imagine this opening the floodgates to all kinds of crazy claims,” Mr. Zywicki said.

Mr. Racine says he is fighting for truth.

“In D.C., you can’t lie to consumers to enrich yourself and get away with it. That’s what this lawsuit is about: standing up for D.C. residents who were deceived and misled. No one — not even Mr. Snyder — is above the law,” he said last week in announcing his lawsuit.

The complaint comes after news that Mr. Snyder, the Commanders’ owner, harassed team cheerleaders and oversaw a toxic environment for female employees.

Mr. Racine says his office conducted a probe and the Commanders, the NFL and their leaders lied to D.C. residents. He’s asked for a jury trial.

“Consumers got false promises and a cover-up that allowed the Team’s malfeasance to remain in the shadows,” the lawsuit reads. “In reality, the picture Defendants painted for District consumers was terribly misleading, particularly during the Investigation, while consumers continued to purchase tickets and merchandise with the understanding that a thorough, unbiased investigation was underway.”

Mr. Snyder has denied much of the allegations, but said he wasn’t as involved in the management of the team as he should have been. He stepped away during the scrutiny and let his wife take over leading the organization.

“Over two years ago, Dan and Tanya Snyder acknowledged that an unacceptable workplace culture had existed within their organization for several years and they have apologized many times for allowing that to happen. We agree with AG Racine on one thing: the public needs to know the truth,” said John Brownlee and Stuart Nash, attorneys for the Washington Commanders.

“Although the lawsuit repeats a lot of innuendo, half-truths and lies, we welcome this opportunity to defend the organization — for the first time — in a court of law and to establish, once and for all, what is fact and what is fiction,” they added.

The NFL, through its spokesperson, rejected the allegations from Mr. Racine.

“The independent investigation into workplace misconduct at the Washington Commanders was thoroughly and comprehensively conducted by Beth Wilkinson and her law firm.  Following the completion of the investigation, the NFL made public a summary of Ms. Wilkinson’s findings and imposed a record-setting fine against the club and its ownership,” said NFL spokesperson Brian McCarthy.

“We reject the legally unsound and factually baseless allegations made today by the D.C. Attorney General against the NFL and Commissioner Goodell and will vigorously defend against those claims,” Mr. McCarthy said.

George Mason University’s Mr. Zywicki finds the D.C. attorney general’s approach untenable, saying he can imagine it going beyond sexual harassment to include other internal personnel matters, such Coca-Cola’s diversity training urging employees to try to “be less White.”

“This is a completely absurd theory,” he said.

What’s more, Mr. Bauer said the courts have confronted a different, but similar, claim in a 2010 case in which a season ticket holder for the New York Jets sued the New England Patriots, arguing the team secretly — and in violation of league rules — recorded opposing teams in order to decode their secret signals.

A federal district court dismissed the case and the U.S. Court of Appeals for the 3rd Circuit agreed, saying the fan never proved a cognizable interest in the team’s fealty to league rules.

“At best, he possessed nothing more than a contractual right to a seat from which to watch an NFL game between the Jets and the Patriots, and this right was clearly honored,” the judge wrote.

“Watching a football game is the only thing you get when you buy a ticket,” he said.