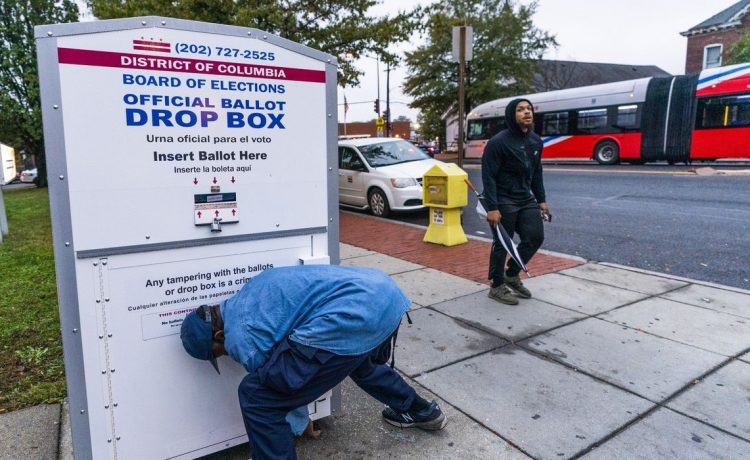 The nation’s capital is on track to become the next Democratic-led city to approve legislation that would allow noncitizens to vote in municipal elections, an endeavor that local leaders are racing to implement before a potential Republican takeover of Congress.

The D.C. Council sent a bill to Mayor Muriel Bowser this week that would pave the way for undocumented residents who have lived in the city for at least 30 days to cast ballots in local elections.

While federal law bars noncitizens from voting in federal races, states and local municipalities have the ability to extend the right that is typically reserved for citizens to those who are not. If it becomes law, D.C. would join the likes of 11 towns in Maryland and two in Vermont.

But to become law, the bill needs Ms. Bowser’s signature followed by a standard 30-day congressional review period. If that time window bleeds into the next Congress that convenes Jan. 3, 2023, a Republican majority would seek to block it.

“Washington D.C. just moved to let illegal aliens vote. I’ll be introducing a resolution to block this,” Sen. Tom Cotton, Arkansas Republican, tweeted Wednesday. “Let’s get every Democrat on the record on whether illegal immigrants should vote.”

Some Republicans, including former President Donald Trump, have suggested that large tranches of noncitizens have voted illegally in past elections, but recent studies have found only a few dozen potential cases out of millions of ballots cast.

Ms. Bowser has long been supportive of past similar initiatives and introduced a related bill when she was a councilmember. However, she’s expressed recent concern that the current bill is something the council “moved on without much input.”

Her office did not respond to a request for comment.

“This is something we’ve been fighting for for many years,” said Arturo Griffiths, a longtime advocate for immigrant voting rights who became a citizen after moving to the U.S. from Panama decades ago. “She proposed it when she came into office. If she’s really for the people of the District of Columbia, if she wants everybody to vote … she has to make sure she signs it.”

If Ms. Bowser signs the bill, it’s expected to breeze through the Democratic-controlled Congress without opposition.

The lone city councilmember to oppose the bill was Mary Cheh, who did not seek re-election.

She cited concerns that those living within the city or country for such a short period of time lacked a “cultural” connection, noting that the undocumented migrants being relocated to D.C. from the U.S. southern border by Republican governors could vote for local officials after just 30 days.

“My concern has nothing to do with citizenship. Fine, noncitizens should be able to vote in local elections. Whether you’re documented or undocumented. Fine. You should be treated the same. My concern is also not with strangers per se, who have lived in this country, have some connection on a cultural level, some connection of experience in our community,” she said at a meeting about the legislation earlier this month, according to DCist. “I find it unacceptable to say that somebody who has had no connection at all with the United States, with its culture, its democracy, can be dropped off here, reside for 30 days, and vote in a local election. What is wrong with asking they stay a little bit longer?”

Among those publicly opposed to the move is The Washington Post, whose editorial board penned an op-ed this week calling it a “radical” move akin to a political power grab that would push the city further to the left. It would also present “logistical nightmares,” cost millions of dollars, invite potential participation by foreign adversaries and arm Republicans with evidence that Democrats support open border policies for political gain, the board wrote.

“There’s nothing in this measure to prevent employees at embassies of governments that are openly hostile to the United States from casting ballots. Or foreign students who are studying abroad in Washington for a semester,” the op-ed said. “Some progressives hope that reshaping the electorate will allow them to reshape local politics, prodding the city further to the left on issues such as rent control and spending on social programs.”