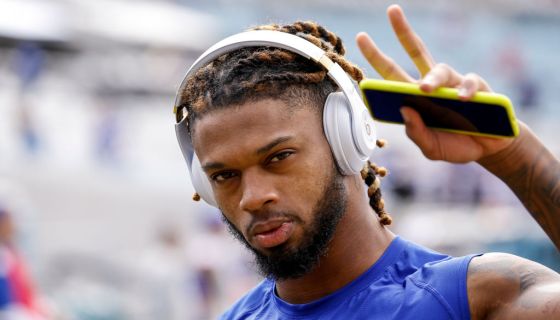 Damar Hamlin shares a small update on social media with the millions supporting him and asks for more prayers for his continued progress.

Damar Hamlin had one of the most insane weeks for an active athlete in recent memory. During Monday night’s game against the Cincinnati Bengals, Hamlin went into cardiac arrest on the field. The 24-year-old Buffalo Bills safety had to be resuscitated on the field and was transferred to the hospital in critical condition. As the world watched we all came together to pray for Hamlin and awaited the next update. Over the next few days, he showed progress and began breathing on his own. Now Hamlin is speaking out on social media and showing he’s hopeful for the road ahead.

Over the week daily updates were shared from the Buffalo Bills but now that Damar Hamlin is recovering he has finally shared a message direct from the source.

“Putting love into the world comes back 3xs as much… thankful for everyone who has reached out and prayed,” Hamlin tweeted on Saturday afternoon. “This will make me stronger on the road to recovery, keep praying for me! “

The Bills will play the Patriots today and Damar will be tweeting support from his hospital bed. Right now there is no update on when Hamlin will be released from the hospital. He seems to be in good spirits ready to continue recovery.