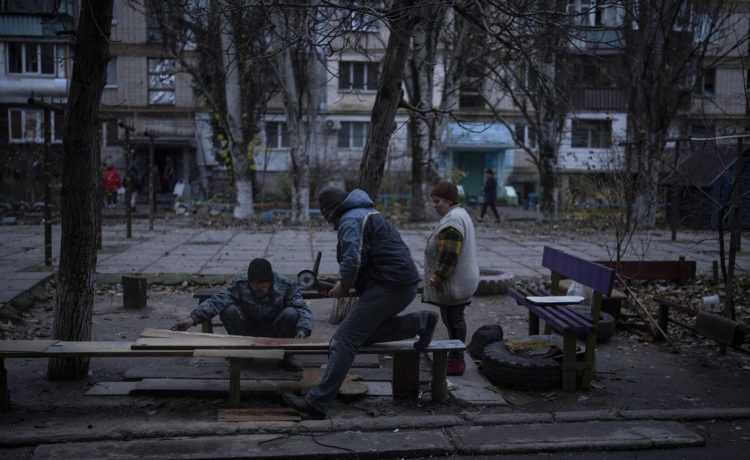 The war in Ukraine is entering its darkest hour, with Kyiv and its Western allies racing to repair energy and water infrastructure destroyed by Russian missiles and to deliver basic cold-weather supplies such as heaters and blankets to a population bracing for a brutal, trying winter.

Ukrainian and Russian forces are still battling for control of key cities in the country’s eastern Donbas region, but the focus increasingly is turning to efforts to prepare both Ukrainian troops and civilians for the wrath of Mother Nature. Russian President Vladimir Putin’s war plan now centers on using drone-and-missile attacks to crush Ukraine’s infrastructure, food delivery networks and other basic backbones of society to the point that a demoralized Kyiv has no choice but to surrender.

For Mr. Putin, it’s a strategy that highlights how his armed forces have been unable to achieve most of their strategic aims through more conventional means. An outcry from the West, and from humanitarian groups across the globe, have done little to slow the Russian strategy of using winter as a lethal weapon.

So far, Ukrainian President Volodymyr Zelenskyy and other Ukrainian leaders have shown no indication that Mr. Putin’s tactics will work. But the most challenging days still lie ahead, and Western officials are warning of the serious dangers facing Ukraine’s most vulnerable citizens.

“As Ukraine continues to seize momentum on the battlefield, President Putin has focused his ire and his fire on Ukraine’s civilian population,” U.S. Secretary of State Antony Blinken said Wednesday during a NATO meeting in Romania. “Over the past several weeks, Russia has bombed out more than a third of Ukraine’s energy system, plunging millions into cold, into darkness, as frigid temperatures set in. Heat, water, electricity — for children, for the elderly, for the sick — these are President Putin’s new targets. He’s hitting them hard.”

“This brutalization of Ukraine’s people is barbaric,” Mr. Blinken said. “We are clear-eyed about the difficult winter that lies ahead. We know President Putin’s playbook: Freeze and starve Ukrainians, force them from their homes, drive up energy, food, and other household costs, not only across Europe but around the world, and then try to splinter our coalition.”

The Weather.com weather report of Kherson, the regional capital recently recovered after hard fighting by Ukrainian forces, showed the temperature staying under 40 degrees Fahrenheit, with night-time lows in the 20s.

“President Putin is trying to use winter as a weapon of war to force Ukrainians to freeze or flee. He is trying to break the will of the brave Ukrainian people and to divide all of us who support them,” he said.

On the ground, Western observers say Russian troops have made some marginal gains in regions of eastern Ukraine but the momentum remains squarely on the Ukrainians’ side. A Ukrainian counteroffensive has pushed Russian forces out of several key eastern Ukrainian cities over the past several months, and military observers say the Russian side appears focused on preparing defensive positions in the Kherson region and elsewhere.

There had been an expectation that the fighting launched by Russian President Vladimir Putin’s Feb. 24 invasion would be sharply cut back as the cold weather came on. Conditions in the east and south, where much of the fighting has focused, are especially challenging now as the muddy ground makes movements difficult and the shorter days limit operations.

“Land warfare is generally very difficult. Winter warfare is doubly challenging,” Mykola Bielieskov, a researcher at the National Institute for Strategic Studies, a Kyiv think tank with links to the government, recently told the Wall Street Journal. “To mount a major offensive, minus-15 degrees will be a challenge for both sides.”

While still prioritizing weapons of war for Ukraine, Western aid packages are now focusing more on the country’s immediate civilian needs for the winter season. The State Department this week, for example, announced a $53 million aid package for power-and-electricity equipment to replace the systems targeted and destroyed by Russian forces. Mr. Blinken said that the Biden administration also is seeking another $1.1 billion to secure energy systems in Ukraine and neighboring Moldova, which has suffered its own electricity blackouts after recent Russian rocket attacks.

International aid groups are rushing other forms of aid to Ukraine, including food, heaters, generators, bottled water, hygiene products, and a host of other items. U.S. companies also are trying to help restock Ukrainian cities ahead of the winter season.

The Maryland-based company Spartan Medical, a veteran-owned contractor for the U.S. Department of Veterans Affairs, announced recently it will donate 700 medical-trade “survival blankets” and other supplies to Ukraine. The company is partnering with the nonprofit James Hollister Wellness Foundation to deliver the items.

“We’ve been providing medicine and medical supplies to Ukraine for months now, but the coming winter has drastically changed the requests we are receiving,” Matthew Hollister, the foundation’s chairman and CEO, said in a recent press release. “For the Ukrainian soldiers battling for their home country, it has always been a life-or-death situation. But now, for the Ukrainian civilians, it’s a life-or-death situation just to battle the weather.”

Such aid is desperately needed. Kyiv and other major cities across the country have seen regular power outages amid the Russian barrages. In most cases, Ukrainian crews are able to repair the damage relatively quickly and get power back online, but such repairs get more difficult each time as destruction mounts and replacement parts become more scarce.

U.S. officials say they’re pursuing a dual strategy of assisting Ukraine with the rebuilding of its infrastructure while also providing new air defenses to lessen the damage of the Russian attacks.

“We’re also trying to be very deliberate … in trying to establish the best possible defense for critical energy infrastructure in Ukraine so that we don’t have a process that keeps repeating itself,” Mr. Blinken said. “Stuff gets replaced. It gets destroyed. It gets replaced again.”

Ukraine is taking other steps to prepare. In a recent televised address, Mr. Zelenskyy announced that Ukraine will maintain thousands of “points of invincibility” in schools, municipal buildings and other sites across the country where civilians can gather if they lose power, water, or other services.

“If massive Russian strikes take place again and if there is an understanding that the electricity supply cannot be restored within hours, the work of ‘points of invincibility’ will be activated,” Mr. Zelenskyy said. “All basic services will be there, including electricity, mobile communications and the Internet, heat, water and a first-aid kit. Absolutely free and 24/7.”